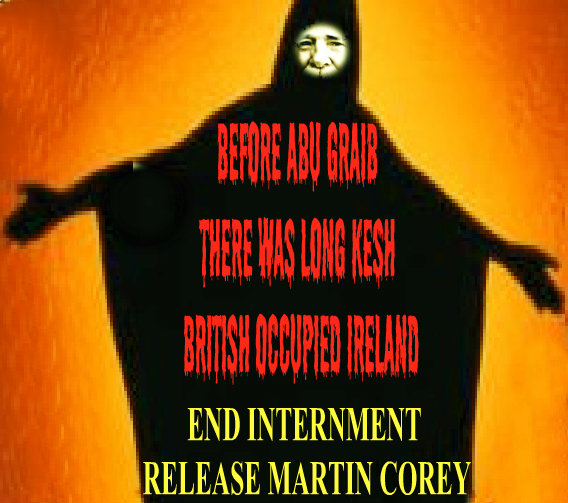 Negotiations are currently being carried out between the British government and legal representatives of Mau Mau insurgents who were tortured by colonial law enforcement officers during the Mau Mau rising.

Britain established British East Africa, as a protectorate on 1 July 1895.  Under an arrangement similar to the plantation of Ulster in Ireland in the 16th and 17th centuries, white settlers were encouraged to emigrate to Kenya.  The British seized over 7 million acres of land including an area that became known as the White Highlands, which was set aside for the exclusive use of white European settlers.

Kenyans rebelled against British rule and colonialism, climaxing with the Mau Mau Revolt of 1952.  A state of emergency was declared on 20 October 1952, during which Operation Jock Scott was launched.  Although KAU President Jomo Kenyatta and 180 other Mau leaders were interned without trial, as happened later with Operation Demetrius in British Occupied Ireland, many of the movement’s most instrumental members were able to evade capture, as news of the impending sweep had been leaked.

By 1953, the British had screening centres in their detention camps, and began mass deportations of Kikuyu from Nairobi, which was the center of the Mau Mau insurgency. Forced labor was imposed, and internment camps were established.  Within these internment camps and screening centers torture took place.  A 2011 editorial in The British Guardian compared them to Nazi concentration camps:

'There is something peculiarly chilling about the way colonial officials behaved, most notoriously but not only in Kenya, within a decade of the liberation of the concentration camps and the return of thousands of emaciated British prisoners of war from the Pacific. One courageous judge in Nairobi explicitly drew the parallel:  Kenya’s Belsen, he called one camp.'

The Kenya Human Rights Commission reported that 90,000 Kenyans were tortured or executed by British security forces during the Mau Mau Rebellion, as techniques including electric shock, cigarette burns, sodomy and rape were used to gather intelligence about insurgent operations.   Some were burned alive, while others were castrated or had other body parts cut off.  In many cases, detainees died due to such brutal treatment.

'With the tacit consent of ministers at Westminster, a British administration in colonial Kenya chose to behave as if Africans had no human rights. Rattled by a handful of murderous attacks on planters, they tried to face down the rebels using the empire's default setting of brutality. Castration, sodomy, rape and beatings were everyday weapons in its unremitting defence of the rights of the white settlers.'

In 2009, British lawyers Leigh, Day & Company filed a compensation claim on behalf of five Kenyans who suffered abuse and torture at the hands of the British authorities.  In addition to detailing acts of torture against each of the claimants, the papers alleged “widespread interference by British authorities in criminal investigations into allegations of abuse and torture of Kenyans” and that “London ignored detailed reports of widespread and systematic violence by security forces.”  According to the suit, “Far from being the acts of a few rogue soldiers, the torture and inhuman and degrading treatment of Kenyans during this period was systemic and resulted from policies which were sanctioned at the highest levels of the British government by the then-colonial secretary.”

Other colonial situations in which Britain used torture include Swaziland, Aden and British Guiana.  These stories are detailed in a book calld, Cruel Britannia. These same techniques were used in British Occupied Ireland during the Troubles, the ones that were inflicted on the Hooded Men.  In fact, both the Compton Committee and the Parker Committee found that the techniques used in British occupied Ireland in 1971 were the same as thosee approved for use in previous operations that included Kenya.

Forty two years ago internment without trial was again introduced in British Occupied Ireland after which the irish Government were forced to take the British to the European Court of Human Rights where the British were found guilty of torture. AAfter the verdict the British Government gace an undertaking to the world they would use these techniques again. What they failed to mention was that they passed the techniques on by training Americans to use them in Abu Graib. They also fulfilled their undertaking by using Americans and extraordinary rendition to do their dirty work for them.

A spokesperson for Britain’s Foreign Office said, “It is an enduring feature of our democracy that we are willing to learn from our history.”  Given Britain’s sustained use of torture against its own people, one must question the veracity of that statement indeed any statement beaing in mind the treatment of one Martin Corey. Martin Corey was incarcerated by the British in Long Kesh Concentration Camp over 40 years ago and is still interned without trial now in Maghaberry.