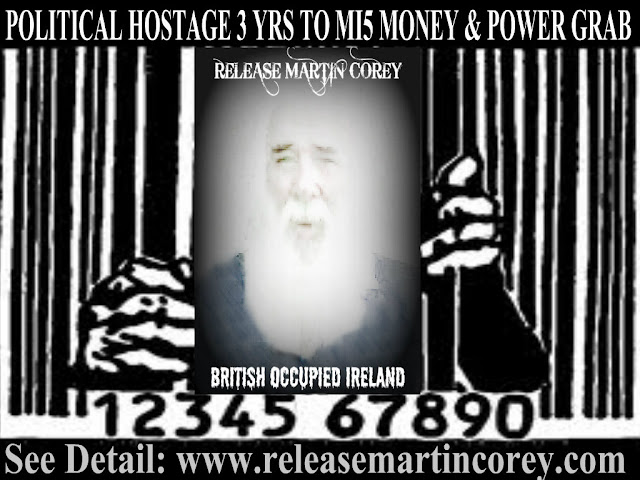 Two co-ordinated gun attacks on 4 January 1976 in British Occupied Ireland, shot dead two unarmed members of the Reavey family and three members of the O'Dowd family, with another two wounded, one of them died a month later. These murders were part of a string of sectarian attacks on Catholics and Irish nationalists by an alliance of British soldiers and British police officers. Billy McCaughey from the police Special Patrol Group, admitted taking part and accused another British police officer, of being involved.
His colleague, John Weir, said two British police officers and a British soldier were involved The O'Dowd and Reavey murders, in what became known as the murder triangle, were a major factor, in young men and women like 19 year old Martin Corey from nearby Lurgan, joining the IRA, to defend their communities from British State terrorism.
British Sinn Féin's elected MLA, John O’Dowd  from the same O'Dowd family, almost 30 years later called on the British Government, to release Lurgan man Martin Corey. Mr Corey who had already served almost twenty years, was arrested again, at his Lurgan home on Friday April 16th 2010, and brought to Maghaberry prison, on the instruction of the British Secretary of State, without any charges being brought against him.
Mr Corey has now remained politically interned more than three years, without charge.or any reasons given, related to his political internment without trial. He therefore cannot defend himself, while the British  State and its secret services, have bombed and shot, the only two local lawyers, Rosemary Nelson from Lurgan and Pat Finucane an expert on European Law, that might have been able to help Martin in the absence of any ethical, political oversight. The British secret services have also assassinated the local journalist Martin O'Hagan in Lurgan, who would have intimate local knowledge of the individuals involved, who would highlight this grave injustice.
MLA Mr O’Dowd has said:
“The detention of any citizen without charge is totally unacceptable. If evidence exists of wrong doing against anyone then the proper course of action is to present that evidence in a court of law.
“A Court hearing allows a defendant to challenge the evidence in an open court and for due process to decide the fete of the defendant, not the British Secretary of State.
“No charges have been brought against Mr Corey and he has now spent 7 months in detention on the word of the British Secetary of sate. His continued detention is totally unacceptable and I am calling for his immediate release."
Now that statement almost three years ago, despite the promises of power sharing in a supposed Peace Process, despite British Sinn Fein being firmly entrenched with the British establishment as part of thegoverning 'executive' in Stormont and Mr O’Dowd "unacceptable" declaration, along with other colleagues brief PR soundbites on the matter have not followed through by any obvious action required, as did the SDLP when internment without trial was last introduced in British Occupied Ireland, when they simply withdrew from Stormont in protest, deeming it totally unacceptable to any Nationalist never mind a professed republicans. Dead Irish republican volunteers would turn in their graves at such a spectacle. Meanwhile Adams and Co. couldn't be bothered explain the details of any agreement or couldn't be bothered other than issue a few grunts of PR Soundbites while climbing to power on the wounds of their dead volunteers and martyrs.
All of these matters related to the welfare and status of ex-combatants and volunteers, before the so called "Peace Process" were meant to be dealt with under what became known as the Weston Park agreement. However it now appears, there was no actual agreement on this matter at all, with the result that many ex-combatants and volunteers have been thrown to the British wolves and left without any protection.The British now politically intern and imprison with impunity at Her Majesty's pleasure. Right now members of British Sinn Fein, Republican Sinn Eein, Eirigi and RNU all perfectly legitimate political parties, are incarcerated indefinitely as political prisoners, prevented from pursuing their political objectives by peaceful means, hardly the fruits of an genuine Peace Process?
The leader of British Sinn Fein, has been taken to task on numerous occasions by many volunteers, including myself, about the terms and conditions of agreements, with regard to ex combatants.Gerry Adams and his colleagues have failed to clarify or be accountable to the people, who put his party in political power in the first instance. In the absence of accountability, we can only reasonably assume after the passage of so much time and the incarceration of so many former volunteers, that there is no actual agreement on this matter. This is criminally irresponsible by any standards of leadership.
Now one of the first responsibilities of any leader, in the event of the cessation of hostilities, are to acquire assurances and promises with regard to the welfare of his community and his soldiers(volunteers). Undertakings of protection for example of children and women from rape and his soldiers from revenge or vindictive treatment. To cease activity without such undertakings or promises is called an unconditional surrender and betrayal of both community and volunteers. The rape of republican children and women continues along with the vindictive treatment of senior republicans like John Downey and Martin Corey to name but a few. Whatever John O'Dowd or British Sinn Fein mean by   "unacceptable", in the instance of genuine Irish Republicans that translates into action, hopefully peaceful

The most famous early use of the phrase occurred during the 1862 Battle of Fort Donelson in the American Civil War. Brigadier GeneralUlysses S. Grant of the Union Army received a request for terms from the fort's commanding officer, Confederate Brigadier GeneralSimon Bolivar Buckner. Grant's reply was that "no terms except an unconditional and immediate surrender can be accepted. I propose to move immediately upon your works." When news of Grant's victory—one of the Union's first in the Civil War—was received inWashington, D.C., newspapers remarked (and President Abraham Lincoln endorsed) that Ulysses S. Grant's first two initials, "U.S.," stood for "Unconditional Surrender," which would later become his nickname.
However, subsequent surrenders to Grant were not unconditional. When Robert E. Lee surrendered his Army of Northern Virginia atAppomattox Court House in 1865, Grant agreed to allow the men under Lee's command to go home under parole and to keep sidearms and private horses. Generous terms were also offered to John C. Pemberton at Vicksburg and (by Grant's subordinate, William Tecumseh Sherman) to Joseph E. Johnston in North Carolina.
Grant was not the first and only officer in the Civil War to use such a term. The first instance came when Brigadier General Lloyd Tilghman asked for terms of surrender during the Battle of Fort Henry. Flag Officer Andrew H. Foote replied, "no sir, your surrender will be unconditional". Even at Fort Donelson, when a Confederate messenger first approached Brig. Gen. Charles F. Smith, Grant's subordinate, for terms of surrender, Smith stated "I'll have no terms with Rebels with guns in their hands, my terms are unconditional and immediate surrender". The messenger was passed along to Grant but there is no evidence that either Foote or Smith influenced Grant's decision later on that day. In 1863 Ambrose Burnside forced an unconditional surrender of the Cumberland Gap and 2,300 Confederate soldiers[3] and in 1864 General Gordon Granger forced an unconditional surrender of Fort Morgan.

The use of the term was revived during World War II at the Casablanca conference when American President Franklin D. Rooseveltsprang it on the other Allies and the press as the objective of the war against the Axis Powers of Germany, Italy, and Japan.[4] And, when President Roosevelt suddenly announced this surrender condition at Casablanca, he did so referencing U.S.Grant and the fact that the famous general's initials, since the Civil War, had also come to stand for "Unconditional Surrender". (In doing so, however, FDRhad erroneously referred to Grant as "Ulysses Simpson Grant", which actually was the name of the general's grandson, who had served during both World Wars.)[5]

The term was also used at the end of World War II when Japan surrendered to the Allies. Both Winston Churchill and Joseph Stalindisapproved of the demand for unconditional surrender, as did most senior U.S. officials). It has been estimated that it helped prolong the war in Europe through its usefulness to German domestic propaganda that used it to encourage further resistance against the Allied armies, and its suppressive effect on the German resistance movement since even after a coup against Adolf Hitler."

The current brutal British treatment of political prisoners such as British and Republican Sinn Fein's members John Downey and Martin Corey to name but a few senior republicans, are the fruits of an unconditional surrender by Gerry Adams and McGuinness. As the Good Books says by their fruits you will know them, thus this shameful secret unconditional surrender, was sold to the volunteers, the Irish republican Movement and Irish people as a Peace Process. Part of the attributes of honesty, is calling things by their right name. Adams and McGuinness on the basis of information released to the public are guilty at best of incompetence. I say this in the interest of Irish Republican Unity.

As a volunteer prior to the H-Block Hunger Strike, I was informed that an IRA cessation of activity was already agreed, in return for a political platform. However what we were not told, was that this was a hyped British political platform, exclusive to individuals like Adams and McGuinness, to the detriment of Republican ethics of principles before personalities. I and many others for the sake of some "bloody peace" against our better judgement, were willing to give the process a chance.

I personally believe, that political republican violence at this point in time will not help the "Cause of Ireland and its people of no property." However it is critically important that clarification, honesty and justice drive the process, not obfuscations, political internment and injustice if it is to have any substance or longevity unlike the Sticks and their numerous predecessors of generational  internment and counter insurgency, since the foundation of the two scum states.

I have no choice, as a former volunteer and former chairperson of what has now evolved into British Sinn Fein but to reluctantly, accuse both Gerry Adams and Martin McGuinness of sociopathic, irresponsible, unaccountable, leadership of what has now become definitively in every sense British Sinn Fein. I do not use the words British Sinn Fein, which are a contradiction in themselves lightly. This is not a personal attack, on the individuals concerned who have considerable political charisma and I also know from personal experience there are still some genuine but naive people in that party.

That is not however in the interests of the plain people of Ireland. It certainly is not in the interests of Martin Corey, an innocent 63 year old man, who has been interned without trial, for more than 3 years now, along with other political prisoners abandoned by British Sinn Fein's unconditional surrender. The sociopathic political, personality, that enables the rape and abuse of children, like British Sinn Fein, Fianna Fail, Fine Gael, Lackey Labour have no place in Irish politics anymore for they will enable the abuse of the Irish people as they have always done, to the bankers and the British, in the same way as the rape of their Irish babies.