Imagine if you will, being taken from your home, without a reason or charge, by paramilitary police, who regularly collude in the murder of lawyers and journalists. You are then imprisoned for three years, without being told, how long you will remain kidnapped, by these scum state thugs. 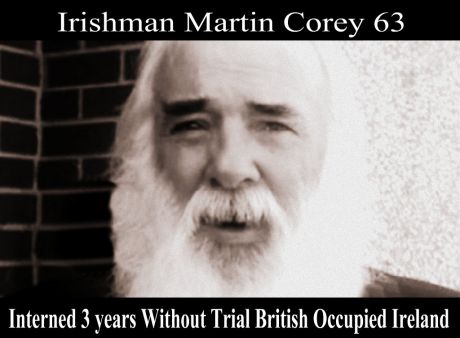 Martin Corey
When a judge is informed about the details of your kidnap, he orders your immediate release. You are taken to the front gate to be released, where you are about to embrace your loved ones, when another dictatorial order, from an unelected English Viceroyal, who inherited her appointed position, from her great, great grandfather, who disappeared millions of your people in a holocaust, orders your kidnap perhaps for the rest of your life, again.

Is this mental torture ? Is this a breach of your human rights. In the instance of Martin Corey, bearing in mind the trauma and his elderly 63 years, it may well be in fact a death sentence, with the history of considerable torture, suffered previously by Martin, at the hands, boots and batons of sectarian state kidnappers who imprison you. The last time Britain introduced internment without trial in the early 1970's, Britain was found guilty by the European Court of Human Rights of torture, when Martin Corey was also battered and tortured, at that time.

Now 40 years later, they are torturing him again, refusing dental treatment for weeks on end of agony, while his handicraft wooden work, is smashed by sectarian prison guards. How then can there be peace, with such injustice in British Occupied Ireland? How can the Peace Process work, with the British Tories systematically undermining and breaching it?

With British internment without trial last time, the Nationalist Constitutional Party of the SDLP, was forced to withdraw from a parliament, dubbed by their arrogant scum state establishment, as a Protestant Parliament for Protestant people. How then can a supposed Irish Republican Party, now stay in the very same Parliament, even when their own peace loving members, the latest being John Downey, are also being imprisoned for activity, part of the settlement, long before the Agreement.

Marian's case demonstrated the ongoing, all embracing, dictatorial power, of the English Viceroyal for British Occupied Ireland, in matters of social control and in controversial internment cases, such as Martin Corey. The reliance by the British on closed material procedures, in alleged terrorist cases, is simply internment without trial and of particular concern to human rights groups, in that the Parole Commissioners, are not members of an independent judiciary in British Occupied Ireland, but are in fact British appointed officers, who were the internment agents, determining the conditions in the first instance.

The role of the Parole Commissioners in Marian and Martin's case and their lack of accountability and authority, should have been put to the scrutiny of the Political Stormont Assembly Justice Committee of the Peace Process a long time ago. The Parole Commissioners in effect gave authority to the decision of judges made years ago, that Marian Price and Martin Corey should be released on bail pending investigations of the PSNI.

It was these decision that the the Viceroyal for British Occupied Ireland ignored, in evoking dictatorial powers, in relation to categories of individuals released or interned under cover of licence, thereby directly interfering with the independence of the judiciary of British Occupied Ireland, who ruled years ago, that both Marian and Martin Corey should be released.

The powers that could have released Marian Price on compassionate grounds, were not exercised or supported by the supposed Minister of Justice, who misled the Stormont Assembly and the public, after being bullied by MI5 and sectarian power brokers in the Assembly.

David Ford therefore exacerbated the medical and psychological conditions of both Marion Price and the elderly Martin Corey, as their internment was illegally prolonged,without charge or a time frame, which after three years in Martin Corey's instance, is mental torture and a blatant breach of his human rights, even by the tinpot dictatorial standards of Viceroyal kidnap, in British Occupied Ireland.

Martin Corey is a fragile old man, who did his bit for his country years ago, like our recently deceased Ruairí Ó Brádaigh. He is a patriot in every sense of the word, of war that had a peace Agreement which the British signed. Only someone acquainted with the extreme sectarianism around Portadown and Lurgan, would understand Martin's heroic, selfless defence of his community, threatened with extinction like the destruction of Bombay Street 40 years ago.

Martin in his old age, deserves respect, along with the peace and justice he craves for his community threatened with extinction, by the very same discredited forces of the disbanded RUC, that he guarded with his life, so zealously and paid so dearly, with 22 long years of imprisonment, torture and abuse by the British regime, found guilty at the European Court. of Human Rights in Strasbourg.

Enough is enough, the supremacist British Tories and their sectarian, fascist Orange Order prison regime, have had their pound of flesh, many times over with Martin already. Before the funeral of Ruairí Ó Brádaigh last week, Martin spent 19 years, before being interned for the last three years, lovingly, hand carving a Celtic cross, as a mark of the esteem, which he held Ruairi, during those long years of hardship.

The photo of this presentation to Ruairí, is the only possible flimsy evidence of Martin engaged in anything remotely political. I am asking all people with compassion, across the sectarian divide, who have respect for their elders, a sense of fairplay and international standards of justice, to campaign on twitter and facebook internationally for Martin Corey. Campaign to Release Martin Corey. Do it for a lasting Peace with Justice in ireland.
Related Link: http://www.releasemartincorey.com

Athenrye - Men Behind the Wire & Free the People

Nobody is safe in a scum state, where there is no rule of law, where a person can be locked up, without an open and transparent trial, on the expensive, paid, secret, evidence of the spooky, unaccountable, intelligence of a foreign, SS Secret Service such as MI5.

Bearing in mind we are constantly being told, that we are in a Peace Process, not wartime Ireland, those supremacist bigoted Tories in London or sectarian Orange Order Loyalists in Belfast, who dismiss Martin Corey’s political internment, as relevant only to traditional Irish Republicans’ or just to the scum state of British Occupied Ireland, would do well to remember the words of their great Tory leader Winston Churchill who wrote;
Habeas corpus and trial by jury are the supreme protection of ordinary people from the state. The power of the state casting a man into prison without formulating charge or deny him judgment by his peers is the odious foundation of totalitarian governments.

To be precise Winston Churchill wrote: “The power of the Executive to cast a man into prison without formulating any charge known to the law and particularly to deny him the judgement of his peers is in the highest degree odious and is the foundation of all totalitarian government whether Nazi or Communist.”

To be further precise, Winston who defeated the Nazi's, I am sure would also agree, that whatever else, neither the Tories or the Orange order can be accused of being communists, so by the very own standards, of their greatest leader, they are most definitively NAZI.

The action of the unelected British Viceroyal and the Government’s Office in overturning a decision of the Belfast High Court, to release veteran Republican Martin Corey, confirms the default position of the British, Peace Process or not, when dealing with Irish working class, as unadulterated, naked, bloody repression.

All the lofty talk of the rule of British law, upon which the British Monarchial state is supposedly based, counts for nothing, when it comes to dealing with those in British Occupied Ireland or elsewhere, whose only "crime’ is to seek self determination for their respective communities or nations.

In Martin Corey's case, the British state has dumped their 800 year old Magna Carta, their Habeas Corpus from the time of their own King John, and courts of a fair and transparent trial, in order to block the release of a traditional Irish Republican, without a shred of credible evidence for "the judgement of his peers" to quote Churchill again.

The political internment of Martin Corey has lifted the veil of secrecy, on the rotten nature, of the scum state of British Occupied Ireland by the standards of any objective, civilized, international observer.

The apologists for sectarian Stormont and the political power sharing arrangements, propagating the illusion, that everything is normal, speak of a new ‘human rights’ regime, with new policing and justice standards. On the day of the recent release, of the interned Marian Price, the President of Provisional Sinn Fein, a principal partner in the power sharing British regime, Gerry Adams himself said, “The logic of today’s release is that Martin Corey should also be freed.”

Now Mr Adams, with all due respect to the part your party played, in the release of Marian Price, after three long years of internment without public charge, reason or time frame, in the instance of 63 year old Martin Corey, there comes a time to walk the talk, to take responsibility as in even the most pretentious democracy.

You sold the Peace Process on a power sharing basis to your movement. I and others like me were willing to give you the benefit of considerable doubt, for the sake of peace. Your Nationalist predecessor the non republican SDLP, walked out of the Stormont parliament, with the introduction of internment without trial 40 years ago, while you own peace loving comrades are still being jailed, while the British are consistently breaking the terms of the peace process.

Enough is enough. You do have the power, mandated to you originally, by the hard work, hardship and commitment of FORMER political activists, like Martin Corey. You are obliged by principles of the 'Irish Republican Movement' from which you originate and derive your power originally, to use that power to dismantle what even the English Tory Churchill referred to as: “The power of the Executive to cast a man into prison without formulating any charge known to the law and particularly to deny him the judgement of his peers is in the highest degree odious and is the foundation of all totalitarian government whether Nazi or Communist.”

Mr Adam's, strip away the spin and dross of the current Tory dismantled and discredited 'peace process', the reality of what remains, is the same discredited, sectarian, undemocratic, colonial scum state, with its speclal courts of repression, special laws of repression and a still colonial police force of the RUC/PSNI, to politically police the dictat of a Monarchial tin-pot dictator. Nothing has changed in terms of the repression of the British Crown towards the native Irish people of British Occupied Ireland ask Martin's neighbours.

With a heavy and reluctant heart, I have to report nothing has changed within the British Sectarian Stormont parliament, in the cozy relationship of Britain and it's well oiled middle class career politicians, despite the odd outburst of electioneering bluster, chasing the Queen's shilling, at the expense the of the people of no property, such as the politically interned Martin Corey.

As a former chairperson of Newry Sinn Fein, I'm calling you out Comrade Adams. Be a man, take responsibility, instruct you party to exercise their political mandate, like the SDLP did all those years ago, and inform the Tories of your party's intention, to withdraw from the British parliament of Stormont, until their odious internment without trial, of ordinary Irish people is finished once and for all.