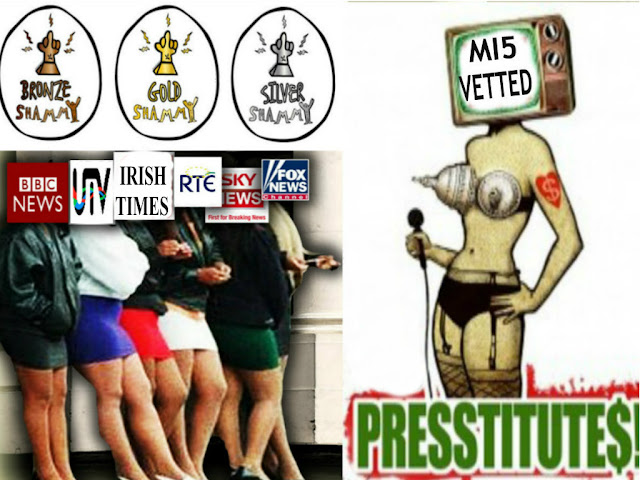 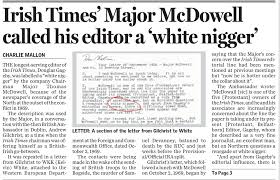 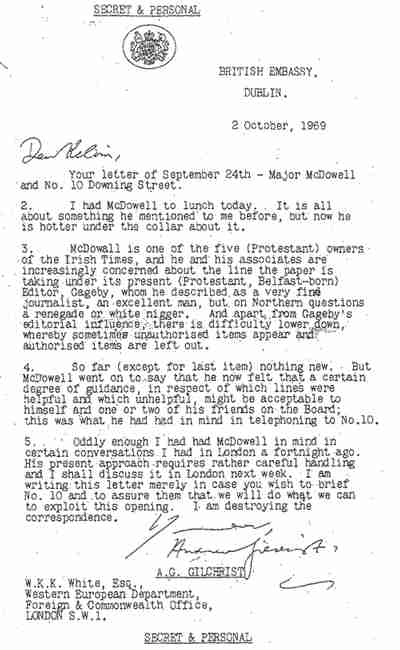 LINK TO NEWS
YOU WON'T FIND WITH IRISH TIMES PRESTITUTES

"There is Difficulty Lower Down Whereby Sometimes Unauthorised Items Appear"

“The correspondence is being destroyed”

Irish Times Chief Executive asks British Government for help in stamping out "unauthorised" material appearing in the paper. "Secret and personal" letter from the British Ambassador details contacts and refers to then Irish Times Editor Douglas Gageby, a Protestant like Major McDowell, as a "renegade white nigger".
Strange things have a habit of appearing on the IMC Ireland newswire late in the evenings and are a sometimes meagre reward for weary unpaid hacks trawling through the daily deletions. This one exceptionally is a stone-cold classic and the image copy of the letter a downright exclusive as far as we can tell. Let us know if somebody else got there first. We now hand you over to 'Captain White'.
For Captain White's full commentary on the letter, a full size cut out and keep version of the letter and a fistful of interesting and provocative letters to the Irish Times Editor on surrounding issues which have remained unpublished just hit the 'feature continues' link below
Update: Jack Lane Slams Irish Times
Update 2: Revealed: Jack Lane's 10 Jan 2003 letter to Geraldine Kennedy
The attached PDF document is a copy of a letter from A.G. Gilchrist, British Ambassador, Dublin, to a Mr W.K.K. White, Western European Department, Foreign & Commonwealth Office, London, dated 2 October 1969. It is marked "secret & personal".

The letter relates to contacts between the British Ambassador and the proprietor of the Irish Times, Major Thomas B McDowell, in which the latter is seeking stronger guidance from the British government on how to control news on Britain’s actions and role in the North of Ireland.

The then Editor of the Irish Times, Douglas Gageby, "Protestant, Belfast born", is referred to as "an excellent man but on northern questions a renegade or white nigger".

The Major asks for direct guidance from No 10 Downing Street for "himself and one or two of this friends on the Board".

It is surprising that no one demanded that the Major relinquish his title when this letter was released (probably inadvertently) with British state papers. Instead a discreet veil of silence was drawn over the affair in D’Olier Street, where the renegade Protestant white niggers have been gradually replaced by a gaggle of Roman Catholic uncle toms. Needless to say, when the details came out, the morose major was forced to deny its contents. He claimed rather feebly to be building contacts between the Irish and British governments.

However, during the 1970s the Irish Times was brought into line, especially after Gageby’s first retirement in 1974. Though Gageby was brought back in 1977, after the indifferent editorship of Fergus Pyle, a ‘Kulturkampf’ had been engineered by Conor Cruise O’Brien during the 1973-1977 labour Fine Gael Coalition. It set the political ‘culture’ of the Times and of the times along a path of general compliance with a British agenda.

The Anglo-Irish Majors and Captains had had their day and the British relied subsequently on the native parochialism and conservatism of the 26 County RC bourgeoisie to dampen down anti-British feeling. New money merged with old, as the new fat cats on the block set about preserving 26 County society from adequately confronting the instability of the sectarian Six County state. The media (especially the Section 31 censorship ridden RTE) ignored the Birmingham Six and the Maguire Family throughout the 1970s and Irish government representatives in the US mobilised against those campaigning for innocent Irish people in British jails.

The period that started with the framing of Captain James Kelly of the Irish Army by the Irish state, and that saw official government and Garda indifference (or worse!) to British complicity in the 1974 Dublin Monaghan bombings, was defined by the Garda heavy Gang beating and subsequent railroading of the IRSP Three (Nicky Kelly, Brian McNally and Osgur Breatnach) for a mail train robbery, of which they were clearly innocent.

In other words, the kak-handed methods of the Major and his MI5 friends were rendered historically redundant. The major and his editorial board team have meanwhile gutted the journalistic belly of the paper. Long-serving journalists have been let go and coverage of the North has been down graded. Long-winded pro-British and pro-war jingoism provided by Kevin Myers is the order of the day.

As if in apology for ousting their betters the pigs that now occupy the parlour have been snorting their derision at the efforts that went into putting them there in the first place: the fighting for and winning of the independence of their country (or the substantial part of it they now do so well in). Myers writes lyrically of the mass slaughter that sent millions to their deaths in the First World War in an imperialist adventure and derides as a criminal conspiracy the relatively tiny amount of violence that secured for this part of Ireland independence from the British Empire. Any lie that has the faint possibility of undermining the basis of the War of Independence is pounced upon with glee and published with the authority of Ireland’s “newspaper of record”.

It was Connolly who said “Ruling by fooling is a great British art, with great Irish fools to practice on”? Kevin Myers and the Irish Times, please take a bow.

In response to a recent advertising downturn, cost cutting measures have been applied to the journalists, while the upper tiers of management awarded themselves hefty monetary rewards. This has not gone down well on the newsroom floor.

The new editor, Geraldine Kennedy, has pursued the conservative Dublin Four agenda and has been found wanting in printing inaccurate information on the North time and again, mostly at the expense of republicans. She states: “Above all else, we commit ourselves to accuracy. If we fail the test of accuracy, we are failing the most essential test of our profession. We recognise, of course, that journalism in a daily newspaper operates in a deadline-driven environment in which mistakes can, and will, happen. When we get it wrong, we say so.”

Twice in one week an editorial writer (the ‘voice’ of the Irish Times) rushed to blame republicans for either something that unionists paramilitaries had done (nailing a Roman Catholic to a wooden fence) or that was the product of a sectarian papist-hunt (the PSNI arrest of a Roman Catholic civil servant in the offices of David Trimble and Mark Durkan for “spying”). In the case of the former a half-hearted and miserable correction was inserted, but the latter inaccuracy was left untroubled by the miniscule corrections that the Times inserts to draw as little attention as possible to errors, large and small.

The Major can rest assured; he has succeeded in his efforts to get the Irish Times to publish the “authorised” version of events.

Ironically, the British Ambassador’s letter ends “The correspondence is being destroyed”. This part of it is here provided for the edification of the masses.
Posted by Unknown at 11:18 PM


Fascist Orange militias are used by the British government in British Occupied Ireland to do their dirty work.According to Chris Ford :"The first movement of 20th century fascism emerged in 1910 to enforce the unity of the United Kingdom... "Sir Edward Carson, raised the 80,000 strong UVF (Ulster Volunteer Force) in defence of empire and against unpatriotic socialists and papist nationalists..."Field Marshall Wilson set up the Specials, a force of 48,000 drawn from the old UVF and Cromwell Clubs. "Lloyd George described them as analogous to the fascisti in Italy. "In the years 1920 to 1922 these British fascists forced 23,000 people from their homes and killed 400 in a campaign of ethnic cleansing."If you think of the Orange Order, you might think of Ulster, the Kincora Boys Home, Clockwork Orange and MI5.
Posted by Unknown at 9:22 PM