Is Vincent Browne One of Us?

Occasionally I find an article in the Irish Times that is worth reading, sometimes written by Vincent Browne, which makes me wonder is Vincent one of us ? What do you think?
"Government zealously protects the wealthy in Ireland’s Wild West tax haven
Column: There is a determination not to disturb the contentedness of the wealthy by even a modest increase in income tax 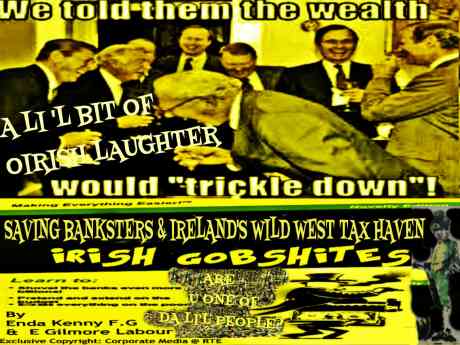 Trickle Down Republic
Occasionally I find an article in the Irish Times that is worth reading, sometimes written by Vincent Browne, which makes me wonder is Vincent one of us ? What do you think?

"Government zealously protects the wealthy in Ireland’s Wild West tax haven
Column: There is a determination not to disturb the contentedness of the wealthy by even a modest increase in income tax

The deference to financial and corporate power that impelled Brian Cowen and Brian Lenihan to give the blanket guarantee to the financial institutions on September 30th, 2008, speaks again in the obsequious secret deals done with multinational companies on tax and in the fastidious avoidance of taxing high earners.
We now know that one of the largest multinational corporations operating here, Apple, pays a derisory 2 per cent in corporation tax and, according to a US congressional report, this is done by way of a deal with the Irish Government. Whatever the truth of that – more probably it was done by way of an unspoken understanding – Ireland now features among the “wild west” tax havens of our time. So much so that an ingenious tax scheme called the “Double Irish”, based on Irish tax regulatory policy, permits the wholesale avoidance of billions in tax revenue to US, UK, Irish and other coffers.
About the only promise this Government made before the last election by which it still stands is to refuse to raise the Irish corporation tax rate of 12.5 per cent. As it happens, the promise is meaningless.
According to the US Bureau of Economic Analysis, the effective corporation profits tax rate in Ireland is 4.2 per cent. The rate in France, by comparison, is 26.8 per cent (this is quoted in Corporation Tax: How Important is the 12.5% Corporate Tax Rate in Ireland? by Jim Stewart of TCD school of business).

Complicity of State
Now new information has emerged about tax devices and Ireland, courtesy of the Economic and Social Research Institute. In an article in the current quarterly review of the economy published last Thursday, John FitzGerald shows that there has been an influx over the last few years of company headquarters from abroad, notably Britain, and the effect of this has been to boost Ireland’s gross national product by about €7.4 billion.
This has seriously distorted the GNP measurement of the Irish economy’s performance, for these companies have no presence of any kind in Ireland and are of no value to the Irish economy. However, because our contribution to the EU is measured on our GNP performance, this means, according to John FitzGerald, that we are paying €100 million more than we should be paying to the EU annually.
Nobody, as far as I know, has made any issue of this but then, given the state of the financial crisis, what is €100 million?
Enda Kenny is off to another EU summit tomorrow and in a few weeks’ time he will be representing the EU at the G8 meeting in Fermanagh. For both these meetings the issue of tax havens is on the agenda and Ireland probably will feature in the deliberations. What will Enda Kenny say about the complicity of the Irish State in these tax structures?
New information has emerged from the Revenue Commissioners on incomes and taxation here. In a written answer to a Dáil question from Labour TD Derek Nolan on April 30th last, Michael Noonan revealed the following estimates for 2013 (married couples who submit tax returns jointly are regarded as one tax unit and the data refers to tax units):
l The total gross income is estimated at €82.5 billion for a total of nearly 2.2 million income tax payers, giving an average income of €37,962 and an average income tax payment of €5,348.
l More than half (54 per cent, nearly 1.2 million) of income tax payers earning €30,000 and less have an average gross taxable income of €14,712.
l Nearly 110,000 earners getting more than €100,000 in gross taxable income have an average income of €183,750, they pay an average of €46,695 in income tax, representing 26 per cent.
l More than 22,000 earners getting more than €200,000 have gross taxable income of €389,742 on average and pay €108,666 in income tax on average – 28 per cent.
l The 141 paid more than €2 million a year have an average gross taxable income of €4.1 million. They pay an average of €1.1 million in tax – 27 per cent.
(The Revenue Commissioners’ chart is published on the Dáil record – question 151 — the above is based on analysis of it.)
The determination not to disturb the contentedness of the wealthy by even a modest increase in income tax (say an effective tax rate of 35 per for those earning more than €100,000) almost matches the zeal to protect the inviolability of the tax haven for the most powerful multinational corporations on earth. And the Labour Party goes along with this as obediently as it supports the abuse of office by Alan Shatter.
Perhaps more depressing is the conduct of the Economic and Social Research Institute. Never once has it even adverted to the social consequences of the policies it advocates in its regular economic commentaries. Never, as far as I am aware, does it address in its economic commentaries the huge discrepancies in wealth and incomes here. It now advocates more austerity and, by implication, it counsels against income tax increases, with no acknowledgment of the inevitable social consequences.
So why bother with the “social” in its title?"
Related Link: http://www.irishtimes.com/business/economy/government-z...age=2