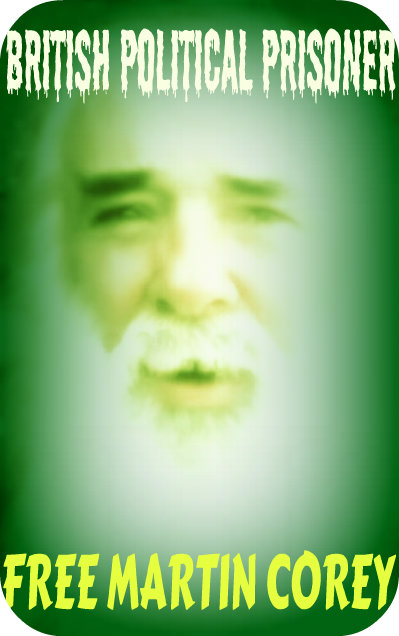 All the fine talk of a 'peace process"which the British supposedly signed up to, counts for nothing, when it comes to dealing with Martin Corey, whose only ‘crime’ is to believe in the independence of Ireland, wear green and attend an annual Bodenstown commemoration ceremony attended by Government ministers, of which the British establishment doesn't approve.

In Martin Corey's case the British state has subverted its own courts, in order to block the order of release of an Irish Republican. What the political internment, without trial, charge, explanation or length of internment of Martin Corey, a 63 old senior citizen has done, is to lift the veil of British Occupied Ireland and reveal a scum state, where there is no rule of law, where a person can be locked up on the secret evidence of a shadowy and hidden intelligence agency such as MI5, who are responsible for the murder of human rights lawyers, journalists, human rights activists and more than a thousand people in Ireland.

No one is safe in such a scum state and those in Britain who dismiss Martin Corey’s case as relevant only to traditional Irish republicans, would do well to remember that what is experimented in British Occupied Ireland today, becomes common practice against ordinary working class people in Britain tomorrow.

The treatment of Martin Corey constitutes an attack by the British Government, not just on Martin’s human and civil rights but also an attack on the human and civil rights of all people within British Occupied Ireland, which along with the political internment of Marian Price on trumped up charges, reflect the the true nature of  bigoted British involvement, in mentored sectarianism of divide and conquer in Ireland..

The Stormont regime, who propagate the lie, that everything is approaching normality, with a new ‘human rights’ agenda are discredited, with their sectarian undemocratic and colonial statelet, with secret courts, special courts, special laws and a re-packaged colonial police force, of old RUC winos, in new PSNI bottled green PSheads, trying feebly, to enforce the writ of the British Royal and her current unelected, vice prostitute. Nothing of any significance has really changed in terms of the British scum state, towards Irish people and the return of internment without trial is the proof of it.

The subverting of their own judicial process, with regard to Martin Corey, has generally been ignored by the corporate media, and when it has, it has been mentioned the emphasis has been on Martin’s previous 19 year political imprisonment in Long Kesh concentration camp. Telling the truth would shine a light on the abnormality of the British Occupied scum state in Ireland. People need to unite and organize on the internment without-trial of Martin Corey and Marian Price and to reshare or retweet articles and accurate information worldwide, to beat the rampant censorship on the political internment of both in Ireland.
Posted by Unknown at 7:56 PM 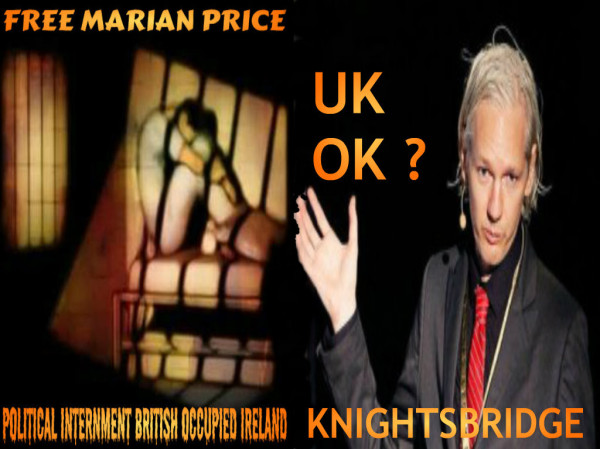 By Joe Brennan - Mar 19, 2013 9:14 PM GMT+0700
Irish bankers preparing for the biggest wave of foreclosures in the nation’s history are struggling with how to dispose of the homes as the central bank pressures them to go after owners of investment properties.
Ireland, which had the biggest real estate crash in Europe with a 50 percent plunge in residential prices since 2007, is only now contemplating significant repossessions. The focus is on the so-called buy-to-let market, or properties bought to rent, which jumped during Ireland’s decade-long real estate boom, and now account for more than a fifth of the 142 billion- euro ($184 billion) mortgage market.
Enlarge image

3:04
March 19 (Bloomberg) -- Marian Finnegan, chief economist at Sherry FitzGerald Group, talks about the Irish housing market and the investment appeal of commercial office space. She spoke Feb. 15 in London with Bloomberg's Neil Callanan. (Source: Bloomberg)
More than a quarter of the 31.1 billion euros of loans on those properties was more than three months in arrears at the end of December, the Irish Central Bank said this month. As the banks repossess and then dispose of properties, they risk killing the nascent real estate recovery, so far limited mainly to Dublin, as international buyers hunt for distressed assets and the country seeks to emerge from the international bailout program at the end of this year.
“If you dump them in the market, you create all kinds of distortions and dislocations,” David Duffy, chief executive of Dublin-based Allied Irish Banks Plc (ALBK), the nation’s biggest mortgage lender, said in an interview. It will be more “ a managed bleed” of homes on to the market, he said.
The scale of the mortgage crisis is clear from central bank figures released this month. Rents fell 25 percent between 2007 and 2010. Buy-to-let mortgages more than three months delinquent rose to 28,421 at the end of December from 27,018 three months earlier. Another 13,469 have had their terms modified. In all, 25 percent of Irish mortgages by value are in arrears or have been restructured. The government has said repossessions will focus mostly on investment properties rather than family homes.

“We see an awful lot more buy-to-let property coming under the control of banks, though not so dramatic among owner- occupiers,” said John Reynolds, KBC Bank Ireland chief executive. “We will need to bring in more expertise to manage” properties over the next two years, he said.
U.S. investors have already made forays into Irish property, as the country seeks to be the first to leave a rescue program since the euro crisis started more than three years ago.
After being forced to take a bailout in 2010 as its financial system teetered on the verge of failure following Western Europe’s worst real estate collapse, Ireland is now forecast to have the second-fastest growth rate in the euro region this year. It last week sold its first 10-year bond since the bailout, and five-year borrowing costs have dropped to the lowest in almost eight years.

More opportunities may arise as the banks ramp up repossessions. Even with arrears rising, lenders have foreclosed on few homes, holding just 454 buy-to-let homes and 903 owner occupier residences at the end of 2012, the central bank said. In part, the reluctance to repossess reflects a cultural taboo, captured in the words of labor union leader Jack O’Connoron March 8.
“The parallels between the graphic images of post-famine Ireland and the prospect our own authorities evicting people from their family homes to pay off debts to those at the top of the European banking system are striking,” O’Connor, head of SIPTU, the country’s biggest union, said. “I suspect that the recent intensification in calls for such unspeakable cruelty is about pandering to the vultures of the global banking system.”
Speaking to lawmakers on March 6, John Moran, head official at the Finance Ministry, said repossession levels are “unnaturally low” and will rise.
Before December 2009, lenders used a 1964 law as the basis to repossess homes. This was repealed and replaced in 2009, which due to a drafting oversight, applied only to loans taken out after Dec. 1 2009. The government has pledged to introduce laws to plug the loophole by the end of the first quarter.

Repossesions are “inevitable,” Central Bank Governor Patrick Honohan said last month, as he outlined the challenges linked to banks foreclosing on such properties.
“Will release of repossessed or surrendered property into the market depress prices further?” said Honohan in a speech. “Or will instead the increased number of transactions relieve uncertainty and help the market to finally find a price floor?”
The question for the banks is what to do with the properties they foreclose on. A complication is the fragile nature of a recovery in home values. Dublin prices rose in January, the second increase in three months. Mortgage lending rose last year by 7 percent to 2.6 billion euros, the first increase since 2008, according to the Irish Banking Federation. Lending peaked at 40 billion euros in 2006.
Yet prices outside the capital fell 1.6 percent in January from December. Across the country, prices fell 3.3 percent from the year-earlier period.

“Banks are going to have to recruit people with property management and asset management skills as they are going to have to accept the reality of holding repossessed buy-to-lets for some time,” said Jeremy Masding, CEO of Dublin-based Permanent TSB Group Plc (IPM), the largest mortgage lender during the boom. “One of their key skills will be offloading repossessed properties without undermining the market.”
Dublin may be able to absorb more houses coming onto the market, according to Rob Kitchin, director of the National Institute of Regional and Spatial Analysis in Maynooth, west of Dublin.
“In provincial towns, it will be much more difficult to shift such property,” Kitchin said. “So banks face the decision of selling low and cutting their losses or holding out for some time until there is stabilization in these markets.”

Bankers recognize the dangers of flooding the market and are looking at alternatives. Allied Irishhas built a database of real estate to see where shortages may emerge. The lender will “manage” properties on to the market, while hiring outsiders for the upkeep of homes, Duffy said.
“One of the big risks is that they turn fallow and that they just go to ruin,” he said. “We want to maintain a portfolio that’s well managed and kept.”
In the banks’ favor is a recovery in rents. Across the country, leases rose 2.2 percent last year, after dropping 0.3 percent in 2011 and 2.5 percent in 2010, according to Daft.ie, the real estate Web site. Dublin prices have risen 6 percent in the past two years.
Twenty-five minutes’ walk away from AIB’s headquarters, at KBC Ireland Bank, John Reynolds is mulling how to bundle portfolios of houses or apartments together to attract overseas investors, as banks prepare to ramp up repossessions. He said buy-to-let portfolios could be packaged as “a neat bundle” for sale.
“If through bad fortune, one ends up with a more spread portfolio, it wouldn’t take huge reengineering to create a pool for investors,” Reynolds said.

While 11.9 percent of loans on Irish private homes were at least three months in arrears in December, repossessions amount to 0.11 percent of all mortgages.
By contrast, while 2.89 percent of U.S. home loans are in arrears, banks’ inventory of repossessed homes was equivalent to 3.74 percent of their loan book during the same time period, according to Mortgage Bankers Association in Washington D.C.
“Arrears are likely to plateau in 2014 as the banks accelerate the resolution” in line with new targets set by the Irish central bank, Fitch Ratings said in a report today. Banks need to propose sustainable solutions for 50 percent of mortgages in long-term arrears -- over 90 days overdue -- by the end of 2013. The central bank is also considering “higher capital requirements for banks that have poor mortgage arrears resolution strategies and weak execution,” according to Fitch.
Even in Dublin, banks need to go about selling property in a controlled way, according to Philip O’Sullivan, economist at NCB Stockbrokers.
“If they were to flood the market with repossessed properties, they would just set back asset values, which isn’t in anyone’s interest -- least of all, their own,” he said.
To contact the reporter on this story: Joe Brennan in Dublin at jbrennan29@bloomberg.net
To contact the editor responsible for this story: Rob Urban at robprag@bloomberg.net
Posted by Unknown at 11:47 AM