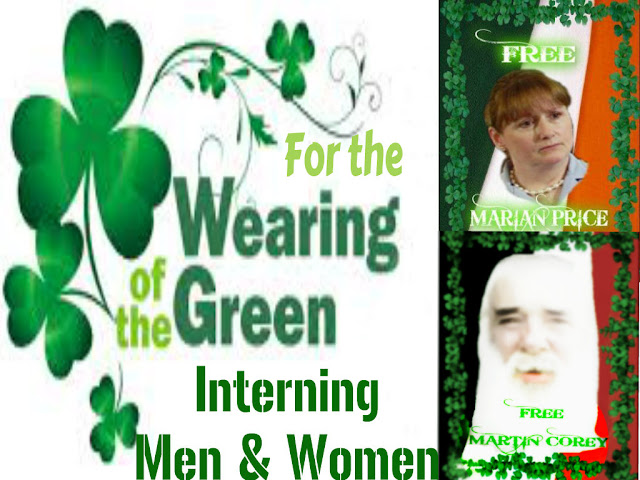 Last year the Tory Mayor of London attacked the Irish community and Saint Patrick's Day celebrations there, describing them as left wing crap.This year a whistleblower inside MI5's multi-million pound palace in Hollywood, has revealed that Martin Corey, who has been locked up for almost three years without trial, charge or explanation of length of sentence, has in fact been indefinitely interned, for wearing a green tie at an Irish parade in Bodenstown. Martin and his family, have for almost three years been totally perplexed and confused, as to why he is imprisoned.

As another Irishman was arrested yesterday in Derry, for participating in an Easter commemoration and a leading orange loyalist Willie Frazer, who organized ongoing serious rioting and possession of a prohibited weapon, was released from Maghaberry jail, sitting in the public gallery, were Stormont loyalist Minister Danny Kennedy, DUP loyalist MLA William Irwin and TUV  loyalist leader Jim Allister, Irish people today are questioning, who represents the Irish people and where is the power sharing agreed, in the apparently now defunct peace process.

Since the arrival of the Tories to power in Britain, heavily subsidized in the election by Britain's Industrial-War complex, they appear hell bent in restarting their highly profitable 40 year war on the Irish people again, despite the much touted Peace Process.Item by item, the Tories have dismantled almost every point of agreement in the process.Unlike war, there simply is no dividend or money in peace for the Tories, who in the space of a few short years in power have besides their existing invasions of Iraq and Afghanistan,  have unofficially invaded Libya, Mali and Syria, while Cameron, as the unofficial salesman for Britain's Industrial-War complex, has been touting business all over North Africa and the Middle-east.

The injustice of indefinite internment without trial for wearing green or attending St Patrick's Day like parades in British Occupied Ireland, is the type of perpetuated racist discourse and discrimination, that started a forty year war by the British Government on ordinary Irish people in their own land. What further aggravates their mentored sectarianism, is the British sowing seeds of division and perceived discrimination to enable the continuation, of their poisonous divide and rule policies, along with their British state terrorism of liquidating lawyers, journalists or peace activists who dare hold them to account. Internment was the catalyst last time that started the war and interning Marian Price, a veteran icon of Irish resistance to British repression, was surely calculated by the Tories to prosuce a reaction and another profitable war for the Tory financiers.

The whistleblower from MI5's multimillion Palace in Hollywood, like Buckingham Palace, paid for by British taxpayers, further revealed, that Viceroyal Villiers, who rules her queendom of British Occupied Ireland, for the Queen of England, plans to intern those attending St Patrick's Day parades who wear too much green.. Apparently Viceroyal Villiers, who is not elected, but overrules the six county Stormont mental masturbation chamber, inherited her position of overlordess, from her royal family ancestor the Dishonourable Edward Ernest Villiers, who presided as Viceroyal, over the Great Irish Holocaust, that disappeared over 6 and a quarter million Irish people, numbers even worse than Hitler's holocaust. The source also revealed that Her Majesty the Viceroyal, also plans to extradite 'Green Crap'as the Tories refer to Irish-Americans from both the USA and the Irish scum state, who parade and flaunt green, upsetting Anglo-Saxon gentry sensibilities or west Brit blue blood on this Patrick's Day or in the future.

While "Free Willie' has been liberated yesterday for St Patricks Day 2013, which is seen by those who wish to remain sane as black comedy in the British gulag, the serious part of the equation, is that Marian Price and Martin Corey will be interned, almost two and three years respectively, without trial, contrary to all domestic and international human rights standards. The whistleblower has also revealed, that the real reason, is that both are a "security risk" citing allegations that they might have some "dissident republican beliefs' because they often wear green.

Marian and Martin's legal teams have described this "evidence" as "closed material". The secrecy surrounding the reasons, lack detail on any evidence making it virtualluy impossible to defend their clients.. They are in essence as former political prisoners, prior to the peace process, being held up as an example, in the same sense as those formerly wearing green, were hung up from very high scaffolds by the British Government, who are guilty of blatant racism and what is in effect illegal. kidnap.

There are three primary celebrations every year that genuine Irish people participate in, which includes Government ministers of Ireland, since the foundation of the southern free state. They are traditional St Patrick's Day parades, Easter parades  and Bodenstown. Apparently Martin Corey and Marian Price were photographed by the British, at one of these ceremonies. Marian spontaneously held up a piece of paper, because of a gust of wind, while she was unaware of the contents at an Easter Commemoration. Martin Corey apparently wore a green tie at one commemoration in Bodenstown. These are hardly offences where two elderly people should die interned indefinitely by the British government.

Marian Price and Martin Corey are simply being held up as as an example to anyone Irish, who dares wear green or challenge British occupation or brutal repression in Ireland. With the end of the 800 year old Magna Carta and elimination of Habeas Corpus by Britain, the Hollywood whislteblower revealed, that Her Viceroyalness is now looking at re-introducing the Penal Laws in Ireland with some sort of an understanding with the new Pope Frankie, who plans to go to Hollywood. .

Wearing of the Green – Symbol of Irish nationalism

The Wearing of the Green song recounts the ridiculous lengths the British are prepared to go to in a desperate attempt to suppress Irish nationalism in the 18th and 19th centuries.This was largely because it was the colour of the shamrock, which carried huge significance as it was supposedly used by St Patrick to explain the mystery of the Trinity.The colour green had already had a symbolic significance in Ireland by that time.


It was only a small step to imbue the colour green with the same associations.The shamrock emerged as more than a religious emblem in the early 18th century. It came to be seen as symbol of Ireland and by extension, a symbol of Irish nationalism and independence.In the early 18th century, Irish patriots started wearing green ribbons to show their support for Irish nationalism.Towards the end of the 18th century, the rebel organisation, the United Irishmen adopted green as their official colour.

The British authorities are keen to stamp out any displays of Irish identity and independence. They see the colour green as a dangerous symbol that could rally Irish nationalist fervour. They banned people from wearing green as an open symbol of their Irish identity. Irish newspapers published notices stating that wearing such items as green ribbons or handkerchiefs as “an emblem of affection to Ireland” were forbidden. To wear such items would and still do, “subject a man or woman to imprisonment, transportation, the rope or the bayonet, and expose women to the brutal insults of the common soldiery”.

On St Patricks Day 2013, Marian Price and Martin Corey are currently interned almost two and three years respectively, without trial contrary to all domestic and international human rights standards. The only reason so far given that is that both are a "security risk" citing allegations that they are dissident republicans. Their legal team have described this "evidence" as "closed material". The secrecy surrounding the reasons, lack detail on any evidence. They are in essence as former political prisoners, prior peace process being made an example of.

There 3 principal celebrations every year that real Irish people participate which includes Government ministers of Ireland since foundation of the southern free state. They are traditional St Patrick's Day parades, Easter parades  and Bodenstown. Apparently Martin Corey and Marian Price were photographed by the British at one of these ceremonies. Marian spontaneously held up a piece of paper, because of a gust of wind, while she was unaware of the contents. Martin Corey apparently wore a green tie at one commemoration in Bodenstown. These are hardly offences where two elderly people should die interned, if the British government have their way. Without your help they will die simply being made an example of to anyone who dares wear green or challenge British occupation or brutal repression in Ireland.

Ban on Green like Internment today, seen as Outrageous and Ridiculous

The move was seen by the Irish as both outrageous and ridiculous in equal measure. The song The Wearing of the Green captures both those emotions perfectly. The opening verse conjures up the sense of absurdity with the line “the shamrock is forbid by law to grow on Irish ground”. The song mocks the British for thinking they could pass a law that would stop shamrock growing or green appearing. Though ridiculous, the ban is dangerous because the British  are still prepared to be brutal to enforce it.

Hanging men and women for Wearing of the Green

As the song’s refrain says: “They’re hanging men and women for the Wearing of the Green”.Napper Tandy who is referred to in the song, was an Irish rebel leader at the time of the 1798 Rebellion. He was exiled following the failure of the rebellion and died in France in 1803.

When laws can stop the grass from growing

The Irish saw attempts to ban the wearing of the green as being completely futile. Obviously, they will never be able to do that and by the same token they will never be able to suppress Irish nationalism and the wearing of the green.That’s why the singer asserts that he will continue to wear green in his caibin (pronounced cawbeen) until such time as the British can show that their law can prevent the grass from growing.

Despite the best efforts of the British, they never could and never did prevent Irish people from expressing their identity by wearing green.If anything, they make the wearing of the green more popular than ever. Even today, it is still closely associated with Ireland, as can be seen by the way millions of people who wear green hats, t shirts and emblems every year to celebrate St Patrick’s Day.