The American suffragists more than a hundred years ago were led by activist Alice Paul along with Lucy Burns and others. She led a campaign for women's liberation, when she was
arrested seven times, imprisoned three times, protesting the treatment of fellow  political prisoners with hunger strikes, marches and demonstrations They were successful with in the passage of the Nineteenth Amendment in the U.S. Constitution in 1920. Women worldwide owe these freedom fighters a great debt.

Today in British Occupied Ireland, Marian Price lies dying in an isolated hospital unit, after previously being tortured in solitary confinement for more than a year, in an all male prison. She was also on a hunger strike previously with her sister Dolours, who died a fortnight ago, as a result of a hunger strike, that lasted over 200 days, being force fed for 167 of them. Marian is also currently in both mental and physical agony, as a result of her treatment at the hands of the British. She too will probably die soon at the hands of her British torturers.

Marian Price who was also force fed 400 times like Alice Paul, as depicted in the video above, described her ordeal at the hands of her British male tortures as follows;
"Four male prison officers tie you so tightly can't struggle. You clench your teeth to try to keep your mouth closed but they push a metal spring device around your jaw to prise it open. They force a wooden clamp with a hole in the middle into your mouth. Then, they insert a big rubber tube down that. They hold your head back. You can't move. They throw whatever they like into the food mixer – orange juice, soup, or cartons of cream if they want to beef up the calories. They take jugs of this gruel from the food mixer and pour it into a funnel attached to the tube. The force-feeding takes 15 minutes but it feels like forever. You're in control of nothing. You're terrified the food will go down the wrong way and you won't be able to let them know because you can't speak or move. You're frightened you'll choke to death."

In a recent exchange in the Irish Parliament Deputy Clare Daly said: "We were among a cross-party delegation that went to Maghaberry Prison where we visited both Martin Corey and Marian Price in recent weeks. The health of Marian Price in particular is a cause of grave concern. We all have a role in putting pressure, not just on the British authorities but also on the Northern Ireland Administration. Deputy O’Sullivan is correct; the Minister, Mr. Ford, could release the two individuals on compassionate grounds at the stroke of a pen...I am shocked that the media have not taken it up to a greater extent. The cases involve two people who have been in prison for almost two and three years, respectively. They do not know the charges against them. Their solicitors are not entitled to the evidence against them.

In the case of Marian Price’s parole commission hearing, a representative is being appointed on her behalf to represent her. This is a person she cannot meet, who cannot discuss matters with her or talk to her. This person will attend her hearing, which will be held behind closed doors, which she herself is not allowed to attend. If that was taking place in a tin-pot African dictatorship, we would be banging our drums demanding justice. It is happening on this island and it is absolutely unlawful and disgraceful. I echo the point made previously on whether we can get an official from the southern Government to be a public voice at the hearing. Could we demand that the case is held in public and that Marian Price and her solicitor could attend? Could we begin to address the issues in the broader European Union community because it is a serious erosion of human rights?

Deputy Ms. Daly added: "People who have done something wrong and have broken the law, should of course be brought to justice and to trial. This is the opposite case where people are imprisoned for a period of years whose cases have been heard in open court. They have been found to have no case to answer and then secret evidence has been introduced behind closed doors. That is a fundamental attack on human rights and civil rights for everyone in Irish society and beyond.
We do not know that the royal pardon did not cover the sentences because the official excuse is that the pardon has gone missing. Therefore, how do we know what was specified in it?
.
Why does Martin Corey have to go to the Supreme Court? An open court has already said he has no case to answer. These are serious matters. It is 41 years since Bloody Sunday when people marched against internment. Now there is a new Administration and a new power structure but people are in prison who do not know the reason they are there. The Northern Ireland Minister for Justice could release those two people at the stroke of a pen. I hope that when we have next month’s ministerial Question Time, we do not have to raise the two cases in question because if Marian Price is not released soon on compassionate grounds, given her ill health, it will lead to a seriously destabilising situation in the North for the foreseeable future."

All who are genuinely interested in peace in Ireland, need to do more before Marian dies, which will create the end of the 'peace process' in Occupied Ireland. The Tory British Government and their sponsors of the industrial war complex are hell bent on this, simply because there is no money in peace.The internment without trial, torture and murder by default of Marian Price, an icon of Irish resistance to British oppression in Ireland, will re-create the war theatre of the last 40 years in Ireland, to market British counter insurgency equipment and techniques, in a shop window of the BBC world service, with daily News bulletins to their 'tin-pot dictators' clients of compliant Commonwealth neo-colonies worldwide, with their manufactured reactionary violence, coupled with BBC propaganda based on their version of the 9/11- 7/7 narrative. The BBC propaganda narrative on British Occupied Ireland is about as reliable, as their report of the fall of the third tower block on 9/11, as it clearly still stood in the background of the report.

Deputy Seán Crowe in the parliamentary debate said: "There has been some discussion of this but I want to add a few points. The nature of these cases involves unseen and unknown evidence, so it is difficult for people to defend themselves when they do not know what evidence has been presented against them. The common denominator is the involvement of shadowy figures in the background from MI5 and MI6 who are not friends of the Irish peace process. The Minister said he would get the report of the delegation that visited Marian Price. That delegation has stated that her health is getting worse and we know she is only allowed to exercise in a corridor late at night, with no access to the fresh air or the environment. She is also concerned that there is talk of closing the wing she is on and returning her to what she described as the dungeon. She said that part of the problem with the dungeon was that she was refused access to medication. The Red Cross has been refused access to Hydebank where she is being held. Will the Minister raise that with the British Government?"

Deputy Clare Daly: I appreciate that the Tánaiste has raised those matters but all of us need to do more. We were among a cross-party delegation that went to Maghaberry Prison, where we visited both Martin Corey and Marian Price in recent weeks. The health of Marian Price in particular is a cause of grave concern. We all have a role in putting pressure, not just on the British authorities but also on the Northern Ireland Administration. Deputy O’Sullivan is correct; the Minister, Mr. Ford, could release the two individuals on compassionate grounds at the stroke of a pen.

Bernadette Devlin McAliskey, however stated that the British minister Ford, tried his utmost to prevent Marian seeing her sister Dolours, before she was buried, two weeks ago. In fact Ford attempted to block all media from reporting the facts around this case to the extent, that the judge stated in court, that this Minister for British injustice had no understanding of law whatsoever, while rebuking him in the most derogatory of terms, describing him as the Minster for Lilliput. Others see him as just another sock-puppet of the British executive, created by MI5's secret services, who perverted the course of justice, by destroying the Royal Prerogative, that along with two recent court orders, demanded the release of Marian Price.The courts also ordered the release of another political internee but again the British secret services of MI5 with their sock-puppets Viceroyal Villiers and Ford overruled them.

A Rally in solidarity with Marian Price in Coalisland on International Women’s Day, the 8th March, will be held at the Civil Rights Monument, Main Street at 7.30pm. 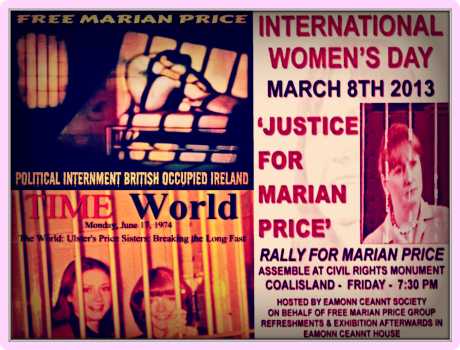 Sisters International Women's Day
There has been considerable British disinformation to confuse and divide supporters of Marian, who has been politically interned without trial (as far as her lawyers are aware) for almost two years. She will be spending her second International Women’s Day in an isolated hospital unit, after previously being tortured in solitary confinement.She was also on a hunger strike previously, that lasted over 200 days, being force fed for 167 of them.

Forget the party politics, whether you are a woman, child or man, show your solidarity with Marian Price, with one United Irish voice on International Women's Day, FREE MARIAN PRICE !. The rally organized by the non-aligned Free Marian Group in Coalisland, will also hold an exhibition to pay tribute to all women who suffered injustice, degradation and denigration as Irish republican prisoners.

For people travelling to Coalisland from Belfast a bus will leave Conway Mill at 6 pm.