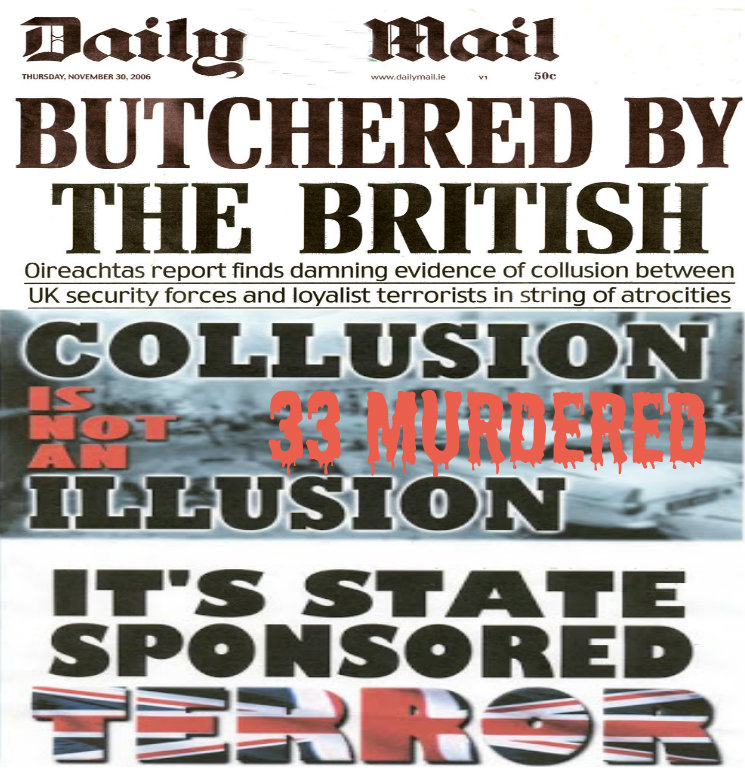 Fears are growing in Dublin, that the British will again bomb the city, under the cover of loyalism, as Belfast loyalists are threatening to come south, after a third night of loyalist rioting in Belfast, with gunshots being fired in east Belfast yesterday. Three nights of rioting by the paramilitary UVF, escalated yesterday, with the help of British fascist from England. Tonight again saw attacks against both the PSNI police and residents of the nationalist Short Strand enclave been augmented by fascists and Nazis from England.

A loyalist gunman opened fire tonight in east Belfast as three nights of rioting by the paramilitary UVF escalated. Tonight again saw attacksagainst both the PSNI police and residents of the nationalist Short Strand enclave. Concern that the British will again bomb Dublin were already growing in 2012 after large primed bombs were found within mile of Garda HQ in Dublin, Áras an Uachtaráin and the US ambassador’s residence.

Police then said bombs that size could blow up a double-decker bus or destroy a building and would “almost certainly” result in fatalities in Dublin.Sources say the bomb found were “way too big” and sophisticated to be used by just organised crime gangs. The bombs were made of home-made explosives with booster commercial explosives. The wiring, detonating mechanisms and batteries needed were present. Commenting on one of the bombs found in Dublin last year, one source said, “It was a full bomb and it was ready for use.”


An Irish Republican Newsflash states that there was a third night of loyalist riots,with shots fired yesterday in east Belfast.


A loyalist gunman opened fire tonight in east Belfast as three nights
of rioting by the paramilitary UVF escalated. Tonight again saw attacks
against both the PSNI police and residents of the nationalist Short
Strand enclave.

The PSNI said they had come under fire and arrested a loyalist on
suspicion of attempted murder.

While examples of British state forces in the North coming under fire
from unionist paramilitaries are extremely rare, the incident marks a
potentially significant development in the UVF's campaign of terror.

There have been paramilitary-orchestrated protests in Belfast since
early December when Alliance members on Belfast City Council voted with
Sinn Fein and the SDLP to restrict the number of days on which the
British union flag flies over City Hall to 15 from 365.

The violence, which stopped over Christmas, began again on Thursday.

Today's disorder began this afternoon when hundreds of loyalists
returning east from a protest at City Hall again attacked nationalist
homes in the Short Strand enclave, before turning their firepower on
the PSNI. The PSNI turned water cannon against more than 100 loyalists
hurling fireworks, smoke bombs and bricks, before gunshots rang out.

Last night saw open street violence on the Lower Newtownards Road, the
Beersbridge area and in Newtownabbey areas of Belfast. Missiles
including petrol bombs, fireworks, bricks and ball bearings were again
thrown at nationalists and the PSNI.

Local Sinn Fein Councillor Niall O Donnghaile called on the PSNI to
ensure that attacks on isolated catholic communities like the Short
Strand "masked under the guise of flag protests" are brought to an
immediate end.

"There has been some good work done by the PSNI in keeping unionist
rioters away from this community but significant mistakes have been
made in facilitating illegal protests and marches in East Belfast," the
former Sinn Fein Lord Mayor added.

East Belfast MP Naomi Long described reports that shots had been fired
in the vicinity as "deeply disturbing." The Alliance politician said it
was further proof the ongoing protests were becoming inextricably
linked with violence.

"This latest rioting, and chilling reports of shots being fired, mark a
new low and must be unequivocally condemned.  The context for policing
them has changed as the protests and violence have become more
orchestrated," she said.

"This is the third successive day of unrest in Belfast," he said.
"These attacks over the past three days are not the mark of legitimate
protest but are the actions of a small group who want to bring Northern
Ireland back to a darker past".

The death toll in the British bombing of Dublin last time was 34 people, which included the Monaghan bombings at the same time, sanctioned by the British Government.The 34 people were all innocent Irish victims, from the two no warning explosions by the British, which included a pregnant woman and a stillborn child. The loyalist Ulster Volunteer Force who were shooting in Belfast yesterday claimed they carried out the bombings in 1994 under orders from the British Government. The Tory Government i Britain has broken the terms of the peace process by refusing to open their files on the matter as agreed.

Busloads of loyalists from where most of the foot soldiers of the Dublin bombers came from, plan to leave Belfast, Co Armagh and from Co Derry/Tyrone to make another journey to Leinster House and demand that Irish flags be removed over Dublin. Bullets have also  been sent to five Irish politicians. Speaking from East Belfast MP Naomi Long, whose constituency office was bombed in Loyalist attacks, likened it to previous Loyalist pogroms in Belfast, saying the loyalist campaign of violence was akin to fascism. She said “It is absolutely appalling that anyone would attempt to murder two police officers." “This is not what democracy looks like....It is what fascism looks like and we need to stand firm in the face of fascism – united across these islands to say that this is not acceptable.”

Loyalists have now attempted the murder of the PSNI or British paramilitary police on several occasions now in the last couple of weeks alone. However British policy still remains the same in Ireland, with the internment without trial of Irish nationalists and Irish republicans, many without any public evidence of wrongdoing, while still adopting a softly, softly approach to the British Government's sponsored loyalists, fascist bombers and gunmen.
Posted by Unknown at 10:28 AM