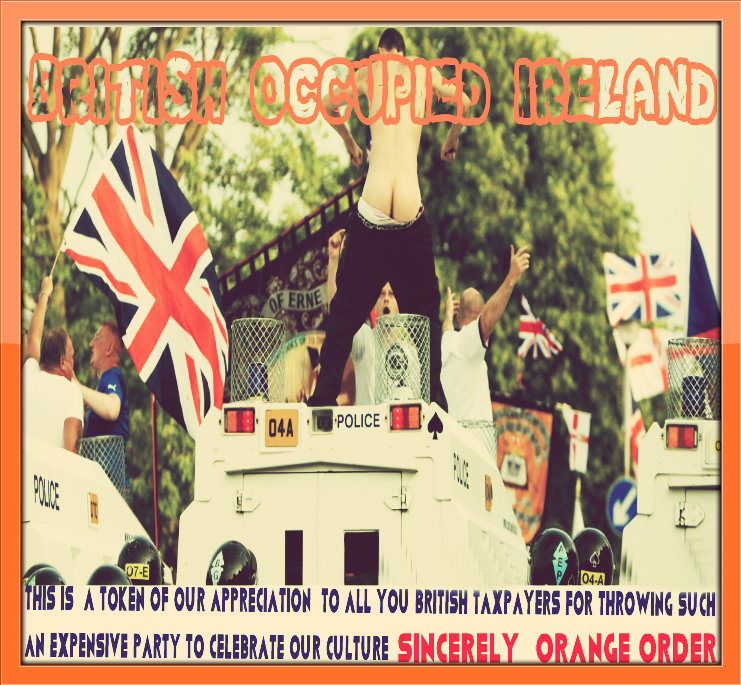 The Orange Order has a very large number of convicted terrorists in its ranks, who murdered Catholics indiscriminately, marching in its parades, through the Greater Ardoyne area, along with banners, that commemorate the sectarian murderers of the Orange Order terrorists, who Murdered innocent Catholics, from within the Ardoyne Community, many of them at the shops, that the Orange Order insist on parading past.


Rumours this year, that the police would push the march through, did not help. Republicans hold parades too but they voluntarily re-route them away from Orange areas and remain within Nationalist areas, which respect diversity but Orange Order controlled politicians, now want these areas to be declared out of bounds, to Irish people as in the old days of Orange Order sectarian times, when the Orange Order had total control. So its an Orange Order Supremacist thing really.


So despite a nominal Peace Process, there was no agreement, no compromise, just the usual stand-off with stalemate and the British paramilitary police supplemented with great cost with English police getting riot training for the furure, stood blocking the Orange Order warpath. So after almost 20 years of a ceasefire of sorts, Orange Order marches remain at the heart of many issues in British Occupied Ireland. So the scene was set as opposing forces came together, a reminder of a failing Peace Process and even more divided communities.


Helicopters circling above, water cannon, barking mad, police dogs with the gunshots of plastic bullets fired holding the line against the Orange order onslaught as they re=enacted the Battle of the Boyne, selectively battering the the English police. The Orange Order were ultimately defeated on the Woodvale Road wit the riot police holding the line. Now the word leaking form Orange Order ranks is that units of three are being organized, to shoot Catholic police and civilians in new sectarian bloodletting. Leadership within Unionism has once again delegated to the paramilitaries of the Orange Order under the cover of names like the uVF


Margaret Thatcher once said they are a British as Finchley, its doubtful however that the behavior of the Orange Order mobs, would be tolerated in Britain. It is all nevertheless subsidized by the British taxpayer to the tune of billions, as the neanderthal Orange Order do incredible damage to the image of Ireland around the world. Britain's secret services are happy though, as it is undeniable justification for their ever expanding power and budgets, borne by the British taxpayer. The Peace Process is systematically being dismantled by MI5 manipulation of violence on the Orange side, who are left to roam the streets, while they provoke nationalists with internment without trial, of perfectly innocent old Fenians like Martin Corey, John Downey and numerous remands of Republican activists, on spurious nonsense, that keeps people interned for years on end, who's only crime is being born Irish, in the scum sectarian Orange state of British Occupied Ireland.