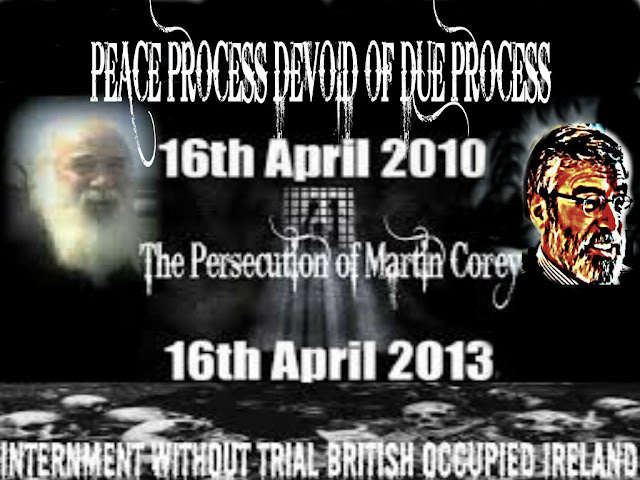 The reason SF and FF split in the first place was the Constitutional issue. PSF surrendered on that matter, so there are now no actual ideological differences.While Martin McGuinness has called De Valera a traitor, for murdering IRA men, he also said Ireland could not be freed without armed struggle. We now have proof that McGuinness is a waffler like Gerry Adams, who says he was never in the IRA and with FF and PSF having 40% of the vote its highly likely that Britain's MI5 will have a major say after the next election and that a United Ireland will rejoin the British Commonwealth. Michael Martin is correct but like Adams he fogets to mention, it is first and foremost devoid of Justice, as in the instance of internment without trial. The Northern Ireland peace process is devoid of urgency and ambition and run by people who pander to their own constituencies and partisan concerns, Micheál Martin has said.
Opening the Merriman Summer School in Lisdoonvarna, Co Clare, last night, the Fianna Fáil leader said problems in Northern Ireland were being merely “managed” rather than “developed”.
“In some areas we are seeing a slow but undeniable retreat from a policy of deeper co-operation,” he said.
A majority in Northern Ireland felt the Stormont Assembly had achieved little, he said. In the Republic, people paid attention to Northern Ireland only when problems arose.
“There are only a handful of journalists who pay any attention to the wider cultural, social and economic dimensions of relations within Northern Ireland and between North and South,” he said.
“It is as if issues relating to the North have been put away in a file marked ‘history’ only to be dusted off when communal tensions flare up again.”
His address focused on the need for the opportunities provided by the Belfast Agreement to be pursued fully.
“The failure to take all of these opportunities, to build deep understanding of other communities, to aggressively target development, to work to being the concerns of marginalised groups and areas on to a shared agenda – each of these poses a long-term threat to what has been achieved,” he said.
The British-Irish element of the agreement was the most developed, he said, but North- South opportunities were being overlooked.Calling for a “reinvigorated north-south dimension”, he said work was needed to promote development which would show practical results for communities.
His singled out the failure to secure funding for the Narrow Water bridge spanning counties Louth and Down, and called for a range of all-Ireland economic initiatives including a Border Economic Zone.

UNITY: CLOSER THAN ANYONE THINKS

Moya St Leger argues that Irish citizens remain unprepared for unity. It is a slightly modified version of a piece   featured in the Irish Democrat on 17 May 2007  Moya St Leger. Connolly Association president  2002-2008.


IRELAND COULD unite within ten years. All the indicators suggest as much. These include the steady demographic shift in the North; the assurance of Her Majesty's Government that Britain has "no selfish strategic or economic interest" in Northern Ireland; the pledge of both the Irish and British governments to support legislation to bring about a united Ireland if both parts of Ireland vote in favour of it, and the fact that political obstacles have been removed to this end.

Yet in the Irish Republic, at home, in the office, on the street, in bars and restaurants, in cabs and buses, not a word is said. Ninety years after the Easter rising - republicans excepted - a nation remains resolutely silent on the one historical imperative for which their forebears fought and died.

There is some talk of a united Ireland in the North but virtually none in the Republic. This has been noted by the Connolly Association. Since an end to partition is closer than it has ever been, in London we have been swapping our own theories on why so few in Ireland wish to comment.

In Dublin recently, a brilliant young film-maker was unequivocal in her view: "United Ireland? You can keep the north. We don't want those troublemakers," she said.

Understandable. Twenty-five years of bombing and shooting in the north caused people in the Republic to draw back in fright and distance themselves from their northern neighbours. Nationalism became associated with violence, so republicans were banned from radio and TV, and military parades at Easter abandoned.

Hostile media coverage of the IRA campaign mimicked the biased reporting in the British media. The representation of the IRA as a bunch of depraved criminals, whose thuggery bore no historical resemblance to the armed struggle of the 'old IRA', suited certain political elements in the Republic who were nervous of Sinn Fein's all-Ireland focus.

The unremitting anti-republicanism of the mainstream Irish media left no room for dispassionate political analysis and debate. The respectful stance of successive Irish governments vis-à-vis Britain persuaded the Irish that any talk of a united Ireland was tantamount to siding with terrorists.

People were led to believe there was a moral gulf between the 'old IRA' who fought in the war of independence and the Provos, as if a fundamentally different moral standard could be applied to the Soloheadbeg ambush of the RIC in 1919 and the mortar attack on the Newry RUC police station in 1979.

This schizophrenic attitude became the default mindset of the majority. It led to reluctance in the south to acknowledge the north as part of a country with shared ancient Irish roots present before the colonial period. A casualty of this disconnection is the younger generation, who grew up with no strong feelings about the border.

Another young Dubliner, an IT consultant, summed it up. "The north isn't our concern. Let the politicians get on with whatever they're doing, we've got better things to do with our time". He admitted to having little interest in Irish history. The tales of a handful of over-nineties reminiscing about the 1920s in country snugs never reached the ears of the Celtic Tiger generation hanging out in their trendy bars in the cities.

Now the Celtic Tiger is dead and the Irish of the Republic have seen their dreams shattered by having blindly nailed the Irish tricolour to the EU mast, Sinn Fein is increasing its TDs in the Dail, and Gerry Adams TD gaining influence in the Republic with his relentless unification campaign. Adams has clearly seen that relying on the Good Friday Agreement to produce constitutional change is not enough.

The under-forties in the Republic cannot empathize with the powerful emotions and zeal which fuelled the war of independence and the civil war. Never having experienced British hegemony, they see no point in challenging the status of the north, even less in discussing it.

Undeterred by the nation's waning interest, Albert Reynolds an astute businessman turned politician, who had never let the border impede his commercial activities, decided the conflict had to end.

By entering into talks with British Prime Minister John Major, the Taoiseach risked his political career in an effort "to overcome the legacy of history and to heal the divisions".

The seismic movement of the political ground triggered by the Reynolds-Major talks resulted in the Downing Street Declaration of 1993. Five years later, the multi-party Good Friday agreement received the consent of 94.39 per cent in the Republic.

Some Protestants in Northern Ireland's business community already locked into the global economy are wondering whether unification would be such a bad thing after all - provided they can keep their British passports!

The grindingly slow process agreed by the British and Irish governments of creating a stable Northern Ireland should not impede a nationwide debate in the whole of Ireland about the country's future. Adams is right to encourage that debate. He of all people knows the British will not discourage it because a national debate within the whole of Ireland accords with the unstated British long view that ultimately sovereignty of the north will have to be surrendered for chiefly economic reasons.

The state visit of the Queen to Ireland in 2011 was no courtesy visit. It signified the Crown's formal acknowledgement of the Irish Republic.  One day a British monarch will be signing an Act of Parliament ceding the six remaining northern counties to the Republic.  The royal visit of 2011 laid the necessary foundation for that Act of Parliament.

Preparing the ground for a united Ireland is laborious and takes time. The constitutional issues are relatively straightforward, but it is not premature for the Irish people north and south to start talking about the daunting practicalities of unification and, crucially, who will fund it.

Accommodating six extra counties will pose a huge challenge for the Republic's institutions and the British civil servants eventually tasked with cooperation in the process. Public discussion is needed in Ireland on how to tackle uniting the administration, the judiciary, education and local government.

The merging of health care facilities and transport infrastructure, not to mention the replacement of sterling with the Euro (if it still exists) and all that entails, require meticulous forward planning. A national debate requires the input of ideas from professionals in all fields. Germany is still working on overcoming the epic obstacles of its unification 24 years later. It is an ongoing process.

A divided Ireland has not been written in stone and acting as if devolution is the end of the road, while being a diplomatic stance to adopt vis-a-vis. unionists, will not stem the inexorable tide of history.

Posted in: Feature from Elsewhere
Posted by Unknown at 6:01 PM