The European Court of Human Rights, ruled on the notorious murder by the British SAS of three IRA members involved in preparing a bomb near the Governor’s Residence in Gibraltar on 6th March 1988. The three IRA Active Service Unit's (ASU) members, Danny McCann, Seán Savage and Mairéad Farrell, were unarmed, with their bomb in a car, more than thirty miles away in Marbella, in a Spanish jurisdiction, confirmed that the SAS personnel involved in the Gibraltar murders (Operation Flavius) were following a British Government official “shoot-to-kill” policy. Claims of British State Terrorism were confirmed in the aftermath of the shootings by a BAFTA Award winning Thames Television documentary Death on the Rock.
The existence of a British Government shoot-to-kill policy, within and outside British Occupied Ireland, was also reluctantly acknowledged by the British establishment, in Mark Urban’s British Gung Ho Big Boys’ Rules where he concluded that there was official British Government involvement in a series of extra-judicial killings:
‘The 1980s saw the emergence of a pattern of aggressive special forces operations with the acquiescence of politicians and senior officers, who knew little of the operational detail … This did not involve the killing of any and every IRA volunteer who could be found, as republican propagandists try to imply. Rather, it meant that those in possession of unusually specific intelligence about a forthcoming terrorist attack provided that knowledge … to the SAS. … it was understood that these soldiers would then take the opportunity to play big boys’ games by big boys’ rules.’
A new militarized Zionist-Christian approach to counter-terrorism, which traditionally had dubious legality, at home as opposed to overseas, however came under growing influence from Israelis within the Britain's SS, along with specific Israeli  intelligence input, into the Gibraltar Operation, without Spanish knowledge, contributed greatly to the Murders on the Rock. The origins of the Zionist-Christian movement can be traced to the early 19th century, when a group of eccentric British Christian leaders, began to lobby for Jewish restoration to Palestine, as a necessary precondition for the return of Christ. They gained traction mid-19th century, when Palestine became strategic to British colonial interests in the Middle East. Christian Zionism preceded Jewish Zionism by over 50 years. Theodore Herzl’s strongest advocates were British Christian clergy.

With a blind eye from prosecution authorities, the use of lethal force continued throughout the second half of 1970s and 1980s, during Roy Mason’s tenure as Viceroyal for British occupied Ireland. The British Government’s standard text on counter-insurgency since this time being Frank Kitson, Low Intensity Operations: Subversion, Insurgency, Peacekeeping using the ‘law and the legal system, simply as weapons in the armoury of the British government, within the legal system, its Court officials and lawyers being used in an extremely manipulative, blackmailed way. This also involves the use of British, extra-judicial murders of human rights lawyers in Occupied Ireland ( see‘ Notre Dame Lawyer  49, 76).
In the mid-1980s the corruption of the British criminal justice process was dramatically evidenced, by the refusal of the authorities to prosecute members of the British police, implicated by Colin Sampson’s the Chief Constable of West Yorkshire investigation, into a series of murders by British State Terrorism in Armagh, in late 1982 and In re McKerr  12, [9]). Incidentally this is the same corruption of the Justice system which is destroying the Peace Process in Ireland currently with internment without trial.
The European Court of Human Right’s ruled, that the United Kingdom had indeed violated Article 2, marking a pivotal shift in relations between the courts and the executive, in the context of British State Terrorism in British Occupied Ireland.
The European Court’s decision, criticized the intelligence information provided to SAS soldiers prior to their British Government order to murder  the IRA Active Service Unit with suggestions that the British fooled the Spanish authorities, who could have intervened in the plot at an earlier stage if the British were not involved in State Terrorism within the Spanish jurisdiction. However the European Court decision was largely censored by the British in the media, with the only matter to receive extensive British media coverage in terms of its impact upon British SS being Spycatcher, see The Observer and The Guardian v United Kingdom (1991) 14 EHRR 153).
The British Government's murder of Danny McCann had more influence upon policy. The Court’s decision in McCann one of the Gibraltar three, forced the United Kingdom, to fundamentally reconsider the courts’ ability to restrain the response of armed police or military personnel, returning the focus to their need, to act in accordance within the bounds permitted, under the concept of self-defence in criminal law (see s.3(1) Criminal Law Act 1967 and s.76Criminal Justice and Immigration Act 2008). These provisions allow an individual to use such force as is a proportionate response, to the threat she honestly believes to be posed by another.
The hyped SS fear of July 2005 which tragically led up to the murder of Jean Charles de Menezes, an innocent South American, at Stockwell Underground Station is agood example of this. The Inquest into the execution emphasized self defence standards, with the coroner, instructing the jury:
‘You should return a verdict of lawful killing if you are satisfied of two matters on the balance of probabilities: (a) that at the time they fired, honestly believed that Mr de Menezes represented an imminent mortal danger to them and/or others around them; and (b) that they used no more force than was reasonably necessary in the circumstances as they honestly believed them to be.’ But the jury however returned an open verdict, indicating that they were not satisfied that these conditions of self defence were met. This shooting demonstrated the latitude extended to British state personnel under Article 2(2) ECHR, despite the successful prosecution of the Metropolitan Police for violating the Health and Safety at Work etc. Act 1974.
After McCann the European Court has continued to impose requirements of strict proportionality, upon the use of force in counter-terrorism operations. More significantly the influence of McCann over decisions such as the Israeli Supreme Court’s limitation of Israel’s targeted assassination policy in The Public Committee against Torture in Israel (2006) HCJ 769/02, which approved the European Court’s proposition that:
‘The use of lethal force would be rendered disproportionate if the authorities failed, whether deliberately or through lack of proper care, to take steps which would have avoided the deprivation of life of the suspects without putting the lives of others at risk’. The British as a result of these restraints are the only country in Europe , who as result of these civilized restraints, want to withdraw from the European Court of Human Rights.
Should policy makers in states under the European Convention disregard these considerations, and seek to either openly approve or tacitly condone extra-judicial killings by state agents of state terrorism, as does the British Government , Article 2 stands as the surest safeguard that military action will not supersede the criminal law as the state’s primary means of responding to terrorism. Britain currently, not alone ignores natural law, Irish law, European but also Spanish Law, with their Criminal murder on the Rock of Gibraltar.

INTERNATIONAL BOYCOTT OF ALL BRITISH GOODS AND BUSINESS 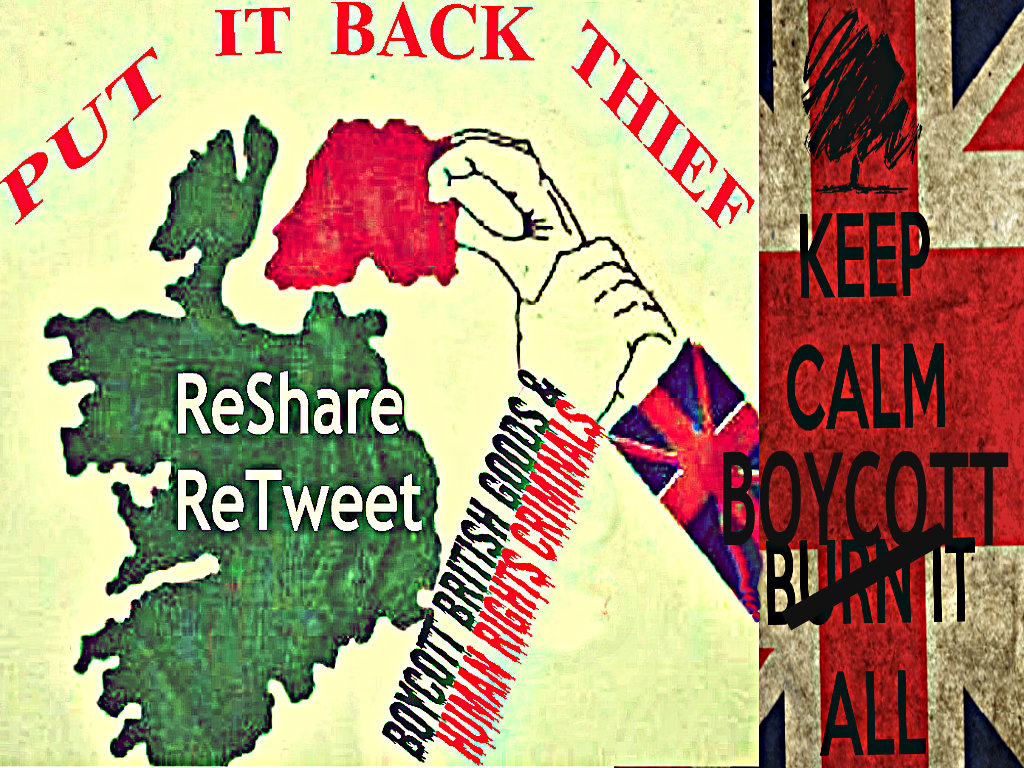 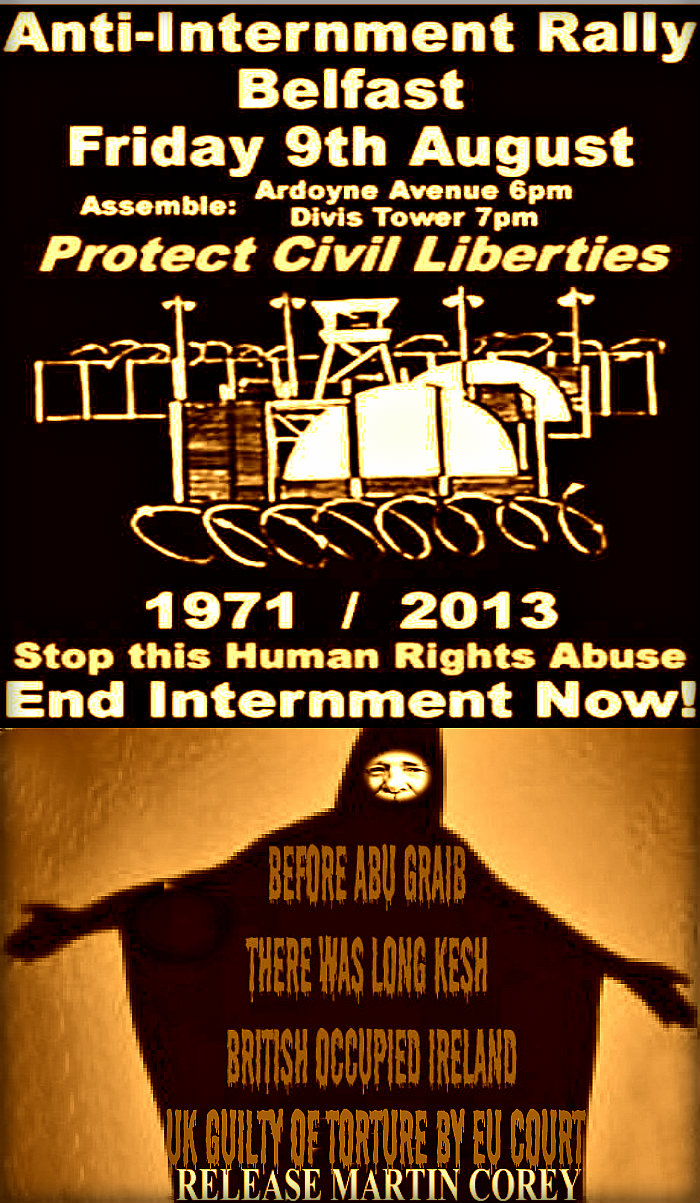