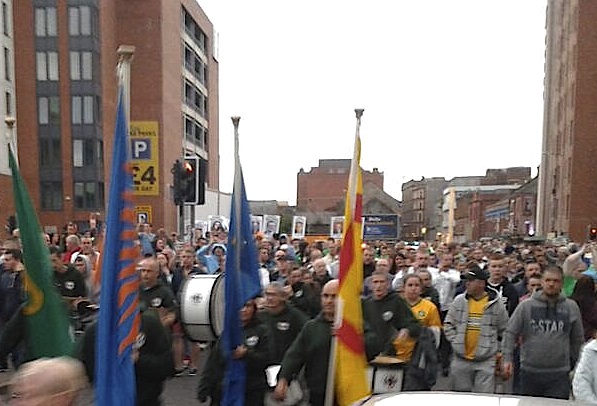 More than ten thousand republicans, socialists and concerned citizens took part in a civil rights march against internment through Belfast this evening despite heavy rioting by loyalists and a political campaign to demonise those taking part.

The planned march along a neutral city centre route from nationalist areas in north Belfast to west Belfast was not considered contentious. But tensions had increased during the week after it was revealed that almost a thousand loyalists had been given permission to hold ‘protests’ along the parade route.
The Parades Commission appeared to have been hoodwinked into believing legal protests were planned when it permitted a number of previously unknown groups to mass along the parade route.

Two so-called ‘residents groups’ were granted permission to stage a protest involving an estimated 300 people at Royal Avenue, where the worst of the violence broke out. A further four protests were held by other Protestant organisations including the Orange Order, adding a further six hundred loyalists into the mix.

Long before the parade made its way into Belfast city centre, hooded flag-waving loyalists blocked the road and rioting erupted along Royal Avenue.
Shocked tourists looked on as bricks, bottles, stones and fireworks showered a showpiece city centre boulevard known for its shops, restaurants and bars. The police responded with water cannon and a small number of plastic bullets, while dogs were used to attempt to control the loyalists.

Business premises were attacked and bins were set alight amid the disturbances. However, the riots only served to draw attention to a hugely successful parade and the incoherent rage of loyalism.While the original, neutral city centre route through Royal Avenue was blocked off, marchers were ironically directed by the PSNI through the intersection of Peter’s Hill and Carrick Hill, passing an interface with the loyalist Shankil Road.

The parade was briefly attacked at the intersection where a burning barricade had been erected. However, it ultimately made it down Millfield to a rendezvous with thousands more cheering supporters in the Divis area of west Belfast.

Organisers successfully appealed for calm from marchers. Amid a lull in the trouble, civil rights activist Dee Fennell said the media had wrongly portrayed the parade.
“This is a parade over a human rights issue, not a republican parade and certainly not a dissident republican parade.”

He said the march had been organised by the Anti-Internment League, and that he is not aligned to any republican group. He said political activists are being held for up to two years on remand before having charges dropped or beating them in court.

“It’s a way to get activists off the streets for two years,” Mr Fennell said. “People think internment is a thing of the past, but only the way it is used has changed. It is now more selective.”