GET OFF UP YOUR KNEES, YOU FEKIN EEJIT ! 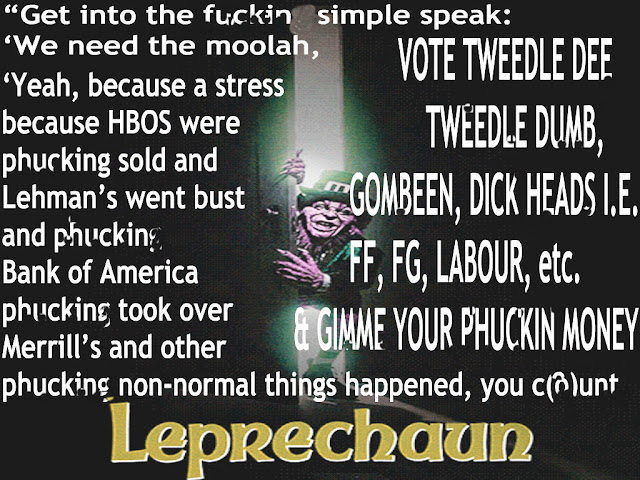 By Vincent Browne
If in 10 years’ time, 1,000 or more bankers, lawyers, accountants, liquidators and others implicated in the bank crisis are in jail and if the same deference to wealth, big business and financial power persists, then we will have learned nothing of consequence. All the hand-wringing will have been in vain.
Almost certainly the reason Brian Cowen and Brian Lenihan capitulated to pressure from the banking world on September 30th, 2008, was not because they were corrupt, nor because of any golden crony circle, but because they were in awe of the power of high finance and feared that if high finance were challenged it would be catastrophic for the nation.
Garret FitzGerald, Alan Dukes and John Bruton did the same back in 1985 when the then overpaid chiefs of AIB came to them demanding a bailout because of their incompetence in allowing an insurance company, ICI, get into massive trouble. They caved in. Within a few months, AIB recorded enormous profits and paid out a huge dividend to their shareholders, lest they, the shareholders, be in any way discomforted. As usual, the Irish people paid for this, that time via a bank levy.

Ordinary Irish citizens
It was that same deference that was at play again in September 2008 – a deference that reflexively deferred to bond holders and huge depositors who took risks, at the possible expense of ordinary Irish citizens (in reality, at enormous expense to generations of ordinary Irish citizens).
How was it, in any case, that we allowed a few financial institutions to attain such enormous power to the extent that we, the Irish people, already exploited by these banks, had to rush to their rescue when their recklessness put them in peril?
The deference is there on the tax haven business – we allow our jurisdiction to be used as a bolthole by multinational corporations to avoid paying tax anywhere and so deep is that deference that we deny that reality.
It is evident again in our deference to the pharmaceutical industry in allowing them to use prices fixed for Ireland as a base level to maintain exorbitant prices for generic drugs here and through the rest of Europe. Evident in stubborn resistance to any suggestion that people earning high incomes be taxed more, in the dismissal of a social model with much greater equality. Evident in the proposals that income tax be reduced for vastly overpaid executives and professionals, even at a time of financial stringency.
It is as though there were a law of nature whereby the wealthy elite must be mollycoddled, while the rest of society struggles. That our primary concern must be the contentedness of the privileged and wealthy, lest they cease to lend us the finance to fund our deficits, lest they cease to create wealth or delay doing so and lest the trickle-down of their wealth to the masses be shut off.
The language of Anglo executives, as revealed by the tapes, has shocked many because of the indifference to the public welfare that this represents. But isn’t our culture founded on an indifference to the public welfare, except as an afterthought or incidental?
What else has informed the Coalition’s action on their election promise to ensure “burden-sharing” on the bank debt? Once it was perceived that pursuit of that promise would alienate the masters of the EU universe, the promise was dishonoured. They promised to “protect the vulnerable” and did the opposite. Would it be surprising if a similar crudity of attitude and language, as exemplified by the Anglo executives in the tapes of their private conversations, were replicated in the private conversations of government ministers and senior public servants?
The proposed inquiry into the banking crisis will not address that culture, for there is no challenge to the pervasiveness of that culture, a culture that the market prevails. It is not Deutschland über alles, but markets über alles. So any inquiry will miss the main point.
A focus on Fianna Fáil will fail to acknowledge the complicity of Fine Gael and Labour in almost every single iota of the policy agenda that caused and drove the crisis.
The partisanship evident in the lead-up to an inquiry will compromise whatever credibility it might have had. The expectation that any such public inquiry will be inexpensive and swift is certain to prove illusory. There will be as many teams of expensive lawyers on hand and frequent excursions to the High Court and Supreme Court to challenge procedures.

Criminal trails
And crucially, the inevitability that any such public inquiry will be derailed again and again by the criminal trials that are due in the Circuit Criminal Courts over the coming years.
Seán Fitzpatrick alone faces two criminal trials and, almost certainly, a third; these extend well into 2014.
There is another option: a commission of inquiry, to be held in camera, out of the public gaze for now, but not derailed by the criminal trials or other diversions. This conducted by a judge, a banking expert and someone who would have knowledge of and interest in the culture thing – the mindset or common sense or hegemony that brought about the crisis and continues to corrupt our society.
But of course that will not happen.
Posted by Unknown at 2:27 AM