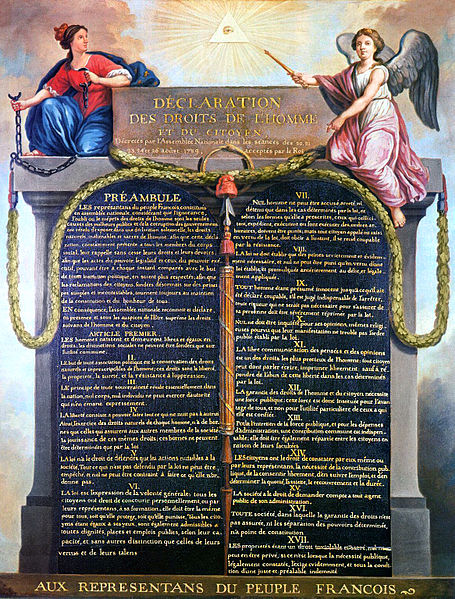 When the leadership of Gerry Adams and Martin McGuinness, accepted the British terms of  an unconditional surrender and handed over their people, arms and volunteers, without any undertakings of protection from their British enemy, they also unconditionally surrendered, republican principles, as defined in the Rights of Man, published in the articles below by Thomas Paine, and generally accepted by republicans worldwide, as the basic tenets of republicanism.

British Sinn Fein, along with their pPresident Gerry Adams, by being part of a British Administration in British Occupied Ireland, administering British Imperial Law, including the political internment of their own volunteers, are definitively not a republican party, even by the standards of the Bush family and the American Republican Party ! The Declaration of the Rights of Man preamble, describes the fundamental characteristics of these rights, which are qualified as being "natural, unalienable and sacred" and consisting of "simple and incontestable principles" on which citizens could base their demands.

In the second article, "the natural and imprescriptible rights of man" are defined as "liberty, property, security and resistance to oppression". It called for the destruction of aristocratic privileges, proclaiming an end to exemption from tax, freedom and equal rights for all human beings and access to public office based on talent. The monarchy was restricted with all citizens having the right to take part in the legislative process. Freedom of speech and press were declared, and arbitrary arrest outlawed

The Declaration also asserts the principles of popular sovereignty, in contrast to the divine right of kings, that characterized the French monarchy, and social equality among citizens, "All the citizens, being equal in the eyes of the law, are equally admissible to all public dignities, places, and employments, according to their capacity and without distinction other than that of their virtues and of their talents," eliminating any special rights for nobility or clergy

.With the introduction of political internment without trial, almost 40 years ago, the principal Nationalist party, at that time, the SDLP, who are not even republican, withdrew in principle from Stormont, recognizing that political internment and democracy were incompatible. Clearly then if  Gerry Adams, Martin McGuinness and British Sinn Fein have any republican principles left or indeed any principles whatsoever,  they will withdraw immediately from Stormont and policing boards, refuse the Queens shilling, until at the minimum, this practice, once described by Winston Churchill as being, "in the highest degree odious."

They will also cease to fraudulently sell the repressive process, of their unconditional surrender to the British , as a peace process. Failing all of this, they will at the minimum, cease to describe themselves as a republican party and disassociate themselves immediately from the honourable name of all Irish republican martyrs. The might also actually encourage some of the their "thinking republican" members, along with Martin McGuinness, (even if someone has to read it for him), to actually read the principles, by which republicans worldwide are defined.

The Articles: of the Rights of Man are below:

Articles:
Men are born and remain free and equal in rights. Social distinctions may be founded only upon the general good.
The aim of all political association is the preservation of the natural and imprescriptible rights of man. These rights are liberty, property, security, and resistance to oppression.

The principle of all sovereignty resides essentially in the nation. No body nor individual may exercise any authority which does not proceed directly from the nation.

Liberty consists in the freedom to do everything which injures no one else; hence the exercise of the natural rights of each man has no limits except those which assure to the other members of the society the enjoyment of the same rights. These limits can only be determined by law.

Law can only prohibit such actions as are hurtful to society. Nothing may be prevented which is not forbidden by law, and no one may be forced to do anything not provided for by law.

Law is the expression of the general will. Every citizen has a right to participate personally, or through his representative, in its foundation. It must be the same for all, whether it protects or punishes. All citizens, being equal in the eyes of the law, are equally eligible to all dignities and to all public positions and occupations, according to their abilities, and without distinction except that of their virtues and talents.

No person shall be accused, arrested, or imprisoned except in the cases and according to the forms prescribed by law. Any one soliciting, transmitting, executing, or causing to be executed, any arbitrary order, shall be punished. But any citizen summoned or arrested in virtue of the law shall submit without delay, as resistance constitutes an offense.
The law shall provide for such punishments only as are strictly and obviously necessary, and no one shall suffer punishment except it be legally inflicted in virtue of a law passed and promulgated before the commission of the offense.

As all persons are held innocent until they shall have been declared guilty, if arrest shall be deemed indispensable, all harshness not essential to the securing of the prisoner's person shall be severely repressed by law.

No one shall be disquieted on account of his opinions, including his religious views, provided their manifestation does not disturb the public order established by law.

The free communication of ideas and opinions is one of the most precious of the rights of man. Every citizen may, accordingly, speak, write, and print with freedom, but shall be responsible for such abuses of this freedom as shall be defined by law.

The security of the rights of man and of the citizen requires public military forces. These forces are, therefore, established for the good of all and not for the personal advantage of those to whom they shall be entrusted.
A general tax is indispensable for the maintenance of the public force and for the expenses of administration; it ought to be equally apportioned among all citizens according to their means.

All the citizens have a right to decide, either personally or by their representatives, as to the necessity of the public contribution; to grant this freely; to know to what uses it is put; and to fix the proportion, the mode of assessment and of collection and the duration of the taxes.
Society has the right to require of every public agent an account of his administration.

A society in which the observance of the law is not assured, nor the separation of powers defined, has no constitution at all.
Property being an inviolable and sacred right, no one can be deprived of it, unless demanded by public necessity, legally constituted, explicitly demands it, and under the condition of a just and prior indemnity.

THIS ARTICLE IS PART OF THE MARTIN COREY DEBATE AT INDYMEDIA IRELAND
Posted by Unknown at 8:45 AM