I lived in Newry for many years and engaged in the same activity as Stephen Murney. For many years previous to that, I was active in many place which included London. The most committed hard working people I have ever personally witnessed, working for the liberation of the Irish working class, were ordinary decent Londoners many of them comrades of Ken Livingstone and the United Troops Out Movement.

Newry is an Irish town close to the border that suffers immensely as result of the partition of Ireland with third and fourth generation unemployment of up to 80% as a result of sectarian economic policies.. The motorway built by the Stormont administration was built purposely short of Newry by several miles, so that no major international employer,would set up factory there and would instead go to a loyalist town. Despite all the promises of the Peace Process about building motorways it has all turned out  to be the hot air of politcal gombeens..

Reading through the article below, reminded me of my own experience with British harassment and internment which was considerable. However I can see from this excellent article from GreenLeft,  that the Peace Process has made no difference to the treatment of activists, who try their best. Indeed paying close attention  to Stevens experiences, I can see it is actually getting worse not better since the so called Peace Process. Thisi type of PSNI/RUC thuggery is not going to drive people who care about community, down the road to peace. I can tell you from my own experience as an Irishman in Newry, that it will either drive you down the road of armed struggle or drink or both which I can tell you from bitter experience does not mix.

That is close to 30 year ago now and it simply was heartbreaking, I was lucky to come away with my life out of it. There are several people I have never had an opportunity to apologize to, or thank, one of them being Fr Murray a man of absolute integrity whom you can trust. If someone can please let him know of my deepgratitude, before either of us kick the bucket,  I would appreciate it very much..There has been a persistent challenge around, since the start of the troubles, since I was a young man, that all options must be explored, before we contemplate armed struggle. I believe with the internet despite considerable censorship by West Brits including britsih Sinn Fein, that there is currently a possible opportunity to check if the pen is really mightier than the sword. I believe we have a moral responsibility to try our best.

I do know from personal experience, that the old adage, the truth will set me free, to be very true, this has been my experience, rather than simply being an opinion. It was possible with help from other people, of no property like myself. I am not sure about this Tharir Square moment but revolution is an ongoing process and it certainly is worth an honest try, within the Irish context and as peaceful way for REAL change but we must organize.

I do hope Leinster House can be Occupied peacefully by sheer numbers alone and that it is organized in a professional manner, that its is not undermined by the traitorius Union leadership, that has essentially sold out, so that it has logistical support, like food, liquid, mobile toilets, volunteered entertainment, defence capabilities, sleeping arrangements, something like hurling gear, with helmets etc., perhaps some hurling clubs can volunteer their support, to help protect older people and people with disabilities. Anyway let's get to GreenLeft's Stephen Murney's internment article...beir bua,  brionOcleirigh

Stephen Murney is a political and community activist who lives in Newry in the north of Ireland. He is also a member of Eirigi (“Arise”), a legal, registered Irish socialist republican political party.

Murney has frequently documented, photographed and recorded incidents of harsh Police Service of Northern Ireland (PSNI) stop and searches of people, house raids and other rough treatment in the Newry area. Murney regularly highlighted these issues in local newspapers and on the internet.

In November, Murney wrote a letter to a local newspaper expressing his strong condemnation of several early morning raids by the PSNI on homes in the Derrybeg Estate, Newry. He said these incursions were causing deep distress to the targeted families and maintained the raids were excessive, unnecessary and avoidable.

On November 28, about 24 hours after Murney’s letter was published, in scenes similar to those he had described, police smashed in his front door and stormed into his home in a dawn raid.

The first charge concerns Murney openly taking photographs of people, including PSNI officers, at a protest rally in Newry in June last year. The PSNI did not question or arrest Murney, or confiscate or examine his camera/phone or ask for certain images to be deleted at that time. The police asked him to stop taking photographs and he promptly did so.

The second charge relates to Murney later posting the photographs on Facebook, as well as having other political images on this computer. The third charge is in regards to the items of clothing (flute band uniform), two ball-bearing air guns (belonging to his son and entirely legal) and political literature seized from his home.

At a hearing on December 21, Murney’s lawyer said the photographs had been taken openly, that Murney had stopped when instructed and that the posting of photographs was for a perfectly legitimate purpose.

Some of the posted photos were taken by Murney at political protests, commemorations and other events. But most of the photos were downloaded from the internet, many were old, dating back to the civil rights Movement in north of Ireland in the late 1960s.

Many supportive references from community groups in Newry in support of Murney were also presented to the court.

It is common practice for political activists around the world to take photographs of protests, including of police at protests. In fact, legal and human rights groups regularly advise political activists to record such protests and any instances of police harassment or mistreatment that occur.

After querying the vague nature of the charges, the judge granted Murney bail. But at the request of the PSNI, the judge imposed several draconian bail conditions, including: banning Murney from living at home with his wife and family; banning him from entering his home town of Newry, where almost all his family and friends live; and banning him from attending any political events or meetings.

The judge also ordered Murney to reside at least five miles from Newry, report daily to the PSNI barracks (a further 12 miles away), accept a daily curfew from 7pm to 10am and wear an electric tagging device at all times.

Murney rejected these humiliating bail conditions, declaring his total innocence of the charges. Several efforts by Murney’s lawyers to change the harsh bail conditions were refused and he remains jailed in Maghaberry Gaol.

“There has been an accelerated erosion of legal rights since 1998,” said Pat McNamee, a member of the Northern Ireland Assembly and friend of Murney.

At a protest for Murney, McNamee said: “Stephen Murney is charged with having a band uniform that he wore whilst a member of a local republican flute band. In ‘newspeak’, that is having a paramilitary uniform and being equipped for terrorism.”

“Stephen Murney is charged with having photographs of protests he had taken part in, which inevitably included images of members of the PSNI, who were also present at these demonstrations. In ‘newspeak’, that is having information useful to terrorists.

“Stephen Murney is charged with having his son’s toy guns in his home. In ‘newspeak’, that is having an imitation firearm.

“In 'real speak', however, Murney has been held in jail for more than six months solely because he is an effective republican and community activist.”

Highlighting that Murney was only one victim of an increasingly oppressive British state apparatus, McNamee said that after two decades of the “peace process”, civil liberties were under attack ― rather than protected through a Bill of Rights was was promised by the 1998 Good Friday Agreement (GFA).

“McNamee said: “Through extended periods of detention, increased stop and search powers, the reduction of the right to a trial by jury and ‘closed evidence hearings’, where judges are presented with secret ‘evidence’ which can neither be disclosed to nor challenged by the accused or their legal representatives … instead of moving forward with human rights, it is they who are dragging us back.”

Murney is a victim of British injustice in the north of Ireland, but he is one of many of those suffering from an increasingly oppressive British state system. The terms of the Good Friday Agreement (GFA) offered better times, a period of peace and healing, yet human rights and civil liberties are still violated.

Since the arrest and imprisonment of Murney, several Irish republican and other groups have campaigned for his freedom, including Eirigi, Republican Network for Unity, Irish Republican Socialist Party, Republican Sinn Fein, 32 County Sovereignty Movement, as well as local Councillors and other individuals.

Independent councillor Davy Hyland from the Newry and Mourne Council said: “Murney has been held ... on the most spurious charges...he tried to get bail, but was given the most atrocious conditions that he couldn’t possibly meet.”

Human rights groups are starting to take up his case. On June 14, Justice Watch Ireland wrote to the British secretary of state for Northern Ireland Theresa Villiers and justice minister David Ford, calling for the immediate release of Murney Murney.

A JWI statement said: “Justice Watch Ireland are more than concerned that Mr Murney may be a victim of the most blatant abuse of the Justice system seen in the last decade.

“We are equally concerned that should this practice of Judicial Abuse be allowed to continue unabated, it could well threaten the democratic rights of all citizens in the future. We call on all politicians and those opposed to losing their democratic and human rights, to voice their disapproval of such abuses continuing.

“Justice Watch Ireland calls for Stephen Murney to be released on unconditional bail as a matter of urgency. We believe his detention is nothing short of ‘Interment’ by definition.

“‘Internment by remand’ is being claimed by many, in which we are currently investigating, but in this case our conclusion is that Mr Murney truly is interned by definition with the use of the remand process currently being implemented.”

Murney is in jail, not because he has done or planned to do anything unlawful, but due to his political views and role as an active, outspoken and effective Republican and community activist.

In a normal, civil society, there would have to be substantial evidence against Murney to warrant the serious charges he now faces. But Ireland's north is not a normal, ordinary place. So, rather than these charges being recognised as ridiculous, in the six Irish counties still claimed by Britain, they are depicted by the PSNI as a very grave matter. If Murney is convicted, he faces a lengthy prison sentence.

The British authorities have used a policy of selective internment against Murney in an bid to silence him and other opposition. A political activist is now in effect interned without trial on the basis of the most ridiculous “evidence”.

Murney is innocent and his jailing utterly unjust. The flimsy charges against him should be dropped and Murney should be immediately and unconditionally released.

Murney said: “Internment was wrong and unjust in previous years and it remains as equally wrong and unjust today. I would encourage all those that disagree with its continued use to organise and publicly oppose internment in its current form.” 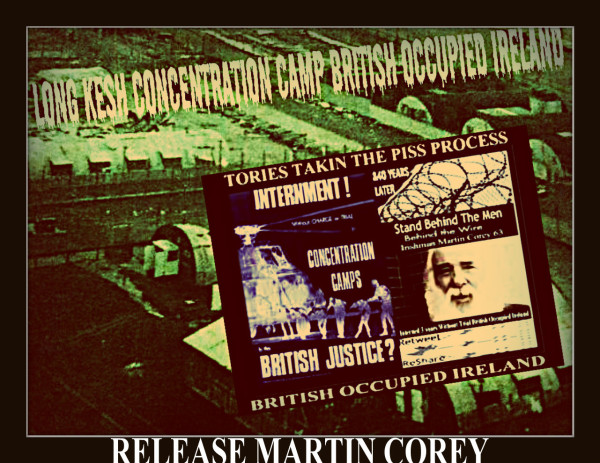 http://www.releasemartincorey.com
Posted by Unknown at 7:46 PM