KEEP CALM PADDY GIVE US YOUR PHUCKIN MONEY 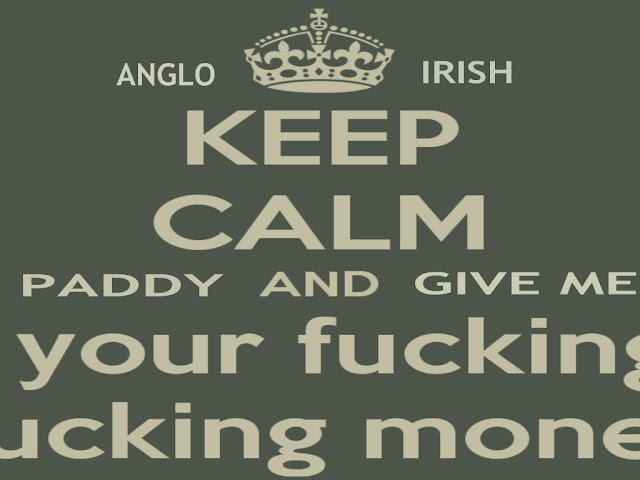 John Bowe, told the other, Peter Fitzgerald, about Anglo’s approach to the Central Bank seeking €7 billion in emergency funding, adding that “the reality is that actually we need more than that”. He said the strategy with the Central Bank was “you pull them in, you get them to write a big cheque, and they have to keep, they have to support their money, you know.

Mr Bowe and another senior executive at the bank, Peter Fitzgerald, are heard laughing about the prospects of nationalisation. They see it as “fantastic” and are delighted at the prospect of becoming civil servants.

Meanwhile according to the Belfast Telegraph, Gerry Adams accuses the Irish Governement of protecting the fat cat bankers as they rob the Irish people but the Irish corporate media have censored it.

"The Government has been accused of protecting fat cat bankers after it emerged ministers were unaware of recorded conversations between formerAnglo Irish Bank executives.

Gerry Adams, Sinn Fein president, said he was astounded to discover that Finance Minister Michael Noonan had no idea the tapes existed. "If he didn't know, then why didn't he know?" Mr Adams said.
The party leader said the Government had failed to chase people guilty of defrauding the state and accused the Government of operating one law for the rich and one for the poor.
A number of Government members, including Taoiseach Enda Kenny and Mr Noonan, have said they were not told about recorded phone calls documenting the first hand account of bankers' attitudes at the height of the economic crisis.
The Central Bank of Ireland revealed that it does not force banks to record internal calls. However, bankers who work on the dealing desks within their institutions have their phone conversations recorded as a matter of procedure.
During his time in Anglo, John Bowe served as director of treasury and head of capacity markets, when he had responsibility for sourcing investment for the bank from the bond markets and laterally, on the deposits front.
According to the Central Bank of Ireland, as is custom and practice in Irish banks and financial houses, bankers working on these dealing desks have their conversations recorded. A spokeswoman, however, said this process is not overseen by the Central Bank, it is done for the bank's own records.
Mr Adams said the fact the Government was unaware of this practice questions how much confidence the public should place in it.
"There's a law for ordinary citizens. If I go into a Dunnes Stores and steal to feed my family, I end up before the courts," Mr Adams said. "But if bankers deliberately defraud the state, boast about it, laugh about it, and boast about their meetings with ministers, it would be okay."
Mr Adams added that Justice Minister Alan Shatter should have had access to the tapes and been able to compile a report of ongoing Gardainvestigations for the public domain. He said had the tapes not emerged through the media, the bankers in question would not have been exposed." 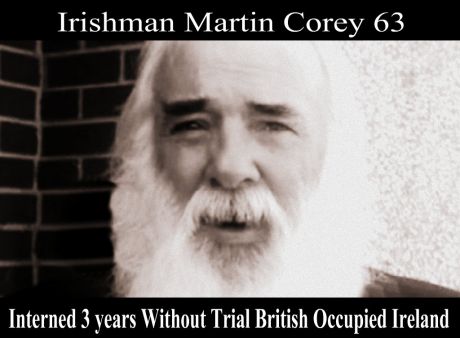