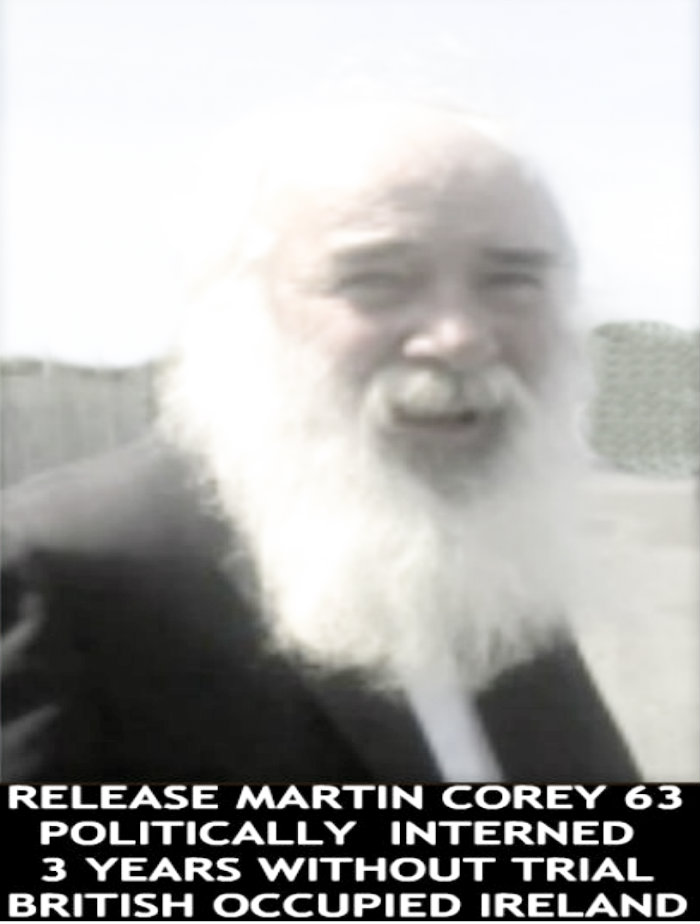 The 'Disappearance' of Martin Corey
Martin Corey is a 62 year old man who has now been incarcerated at the behest of the British Secretary of State in Ireland for over three years. Martin has no charge against him and the only justification for his detention by his captors is that there is a dossier of Secret evidence against him.
So what is this secret evidence and who gathered it? It leads me to my next assumption, that there must be Secret Police working in the Occupied Six Counties. Here is a definition of Secret Police:
"Secret police (sometimes political police) are intelligence agencies and or police agency, law enforcement office which operates in secrecy and also quite often beyond the law to protect the political power of an individual dictator or an authoritarian political regime.
”Instead of transparently enforcing the rule of law and being subject to public scrutiny as ordinary police agencies do, secret police organisations are specifically intended to operate beyond and above the law in order to suppress political dissent through clandestine acts of terror and intimidation targeted against political enemies of the ruling authority.
”Secret police are notorious for raiding homes between midnight and dawn, to apprehend people suspected of dissent.
”People apprehended by the secret police are often arbitrarily arrested and detained without due process."
This description sounds very familiar in the context of the Occupied Six Counties currently under British Occupation in Ireland. Familiar today and not 30 or 40 years ago.
The internment of Martin Corey strikes at the very heart of democracy and the right to a fair trial. Martin cannot expect a charge never mind a trial. The British government have removed a man from his home and family, without giving him the right to know why. Because they have given no evidence against him, Martin has no chance to challenge his internment. Martin has simply disappeared and it would seem the general public and media are content to allow this to happen.
Although We know where Martin is, he has for all intents and purposes simply disappeared , Disappeared from his home with no charge, locked in a prison cell and told he is there due to Secret Evidence. Of course in the western world he is entitled to object to this through the courts, when he did just that a Judge ruled that he should be released as his continued internment was a breach of his human rights.
The Secret Police and those who control them stepped in and ordered that he remain in jail, overstepping the rule of the Courts and removing any illusion of due process. What more evidence therefore do we need that the British Government is running a Secret Police force in Ireland to quell political dissent?
The use of secret evidence, a secret police and shady dealings going on between the British Government and the judiciary should be enough for any citizen to publicly question what is going on.
It is now time that the media investigated what IS going on, that those concerned with human rights issues and all citizens demand an explanation as to why a 62-year old man was taken from his home and incarcerated due to secret evidence that we cannot see. I question the secret evidence, is there evidence at all? Or is this a well rehearsed ploy to stifle political dissent?
Demand the release of Martin Corey, do not allow this inhumanity to continue. "First they came for the socialists,and I didn't speak out because I wasn't a socialist.Then they came for the trade unionists,and I didn't speak out because I wasn't a trade unionist.Then they came for the Jews,and I didn't speak out because I wasn't a Jew.Then they came for me,and there was no one left to speak for me."
Cáit TrainorRelease Martin Corey CommitteeMay 21, 2013
Posted by Unknown at 9:46 PM