He was re-arrested in July 1973 and interned at Long Kesh internment camp along with Martin Corey who served almost 20 years at that time. Martin Corey has, after serving almost 20 years as a political prisoner, since his unconditional release in 1992, been interned again over three years ago without any reason, charge or sentence given to him.

Gerry Adams after taking part in an IRA organised escape attempt, was sentenced to a period of further imprisonment. During this time, he wrote articles in the paper An Phoblacht under the pseudoynm "Brownie", where he often criticized strategy and policies of Ruairí Ó Brádaigh and Billy McKee. He was extremely critical of McKee who decided to assassinate members of the Official IRA from whom they split and were on ceasefire since 1972.

Many still believe that Gerry Adams denials of membership of the provisional IRA, are based on the fact that he was in fact always a member of the Official IRA only, never formally joining the Provisionals. After his release in 1976, he was again arrested in 1978 for alleged IRA membership, the charges were subsequently dismissed.

A long standing Irish Republican principle claims that the only legitimate Irish state, is the Irish Republic, declared in the Proclamation of the Republic of 1916, which they consider to be still in existence The legitimate government of Ireland was vested in the IRA Army Council, with the authority of that Republic in 1938 by the last remaining anti-Treaty deputies of the Second Dáil, while others see the death of O'Bradaigh as the last in that link.

Gerry Adams continued with this claim of republican political legitimacy, until his 2005 speech to the Ard Fheis, when he rejected it in his typical duplicitous manner, by saying : "But we refuse to criminalise those who break the law in pursuit of legitimate political objectives. .. Sinn Féin is accused of recognising the Army Council of the IRA as the legitimate government of this island. That is not the case. .... we do not believe that the Army Council is the government of Ireland. Such a government will only exist when all the people of this island elect it. Does Sinn Féin accept the institutions of this state as the legitimate institutions of this state? Of course we do."

Bearing all of this in mind and the politically sensitive issue of policing and justice in British Occupied Ireland, where the Provos surrendered their arms without, any supposed promised real power sharing in the devolved Assembly, makes their participation look hollow indeed, bearing in mind Mr Adams promises of power sharing to IRA members, as the basis for the Peace Process.

During the internment of Marian Price the nominal bi-party agreed, Justice Minister lied to an Assembly debate about her internment. All the powers of policing, internment without trial, MI5, lie with the English Viceroyal who is heavily compromised to the Secret Services or the Hidden British State. Indeed many believe, that almost all of the elected politicians in British Occupied Ireland have over time, been compromised to creepy Secret Service blackmail.(See; Britain's Spy Agency Taps Fibre-optic Cables for Secret Access to World's Communications)

Meanwhile interned traditional Irish Republican Martin Corey still maintains he still has absolutely “no idea,” why he is being interned without trial more than three years.Speaking from a hellhole in Maghaberry gaol, the Lurgan man says he believes he has been interned strictly because of his political belief in a United Ireland. In other words 'an Irish prisoner of political conscience' in Gerry Adam's negotiated British Occupied Ireland????

Martin says “I have been interned for three years now and I still haven’t been given a reason. They have put forward a number of allegations against me, and for three years, I’m not able to defend myself against any of them.They say I have been seen speaking to known republicans, and that I visited a number of houses in Lurgan Tarry but almost every house in my Town is Irish republican. What does that matter? It doesn’t mean I’ve done anything wrong. They have absolutely nothing on me, and that’s why they haven’t charged me. When I went to court, I end up being ordered to be released by the Judge, but without a a shred of evidence against me the English Viceroyal again overruled the judge and interned me again.”

Martin Corey continued: “When I was arrested, I was taken to Lurgan police station. None of the police officers in the station knew why I had been arrested. I was then taken to Maghaberry. When I got here, even the prison officers were surprised to see me. One of them asked me, what I was doing here, and I replied, ‘You know as much as I do’. I was thrown into a cell and I have been here ever since.The fact that I’m in here and haven’t been given a reason, makes the whole thing even worse. If they have anything on me, they should charge me and send me to a proper trial. If not, I should be released.”

Martin a 63-year-old man, losing his power with age and the mental torture of indefinite internment, worked as a grave digger in the town for twelve years before he was interned, further stated: “When I was released from Long Kesh internment camp originally, after serving almost 20 years, I did not get involved in anything. I would have attended the odd white-line protest picket, things like that. But that is definitely the most I would have been involved with. I have held down a steady job for more than a decade, and even got a character reference from Monsignor Hamill. To accuse me of posing a threat is just ridiculous.”

Mr Corey has previously said: “A hunger strike is looking like a very real possibility. The agreement is not being implemented. Omniously he added: “There are plenty of volunteers for a hunger strike. That’s one thing there’s no shortage of.” The unelected English Viceroyal was
un-available for comment, a spot of fox hunting like her previous ancestral Viceroyal, perhaps?

Neither was Gerry Adams available, who has done nothing of substance, other than stating publicly, after the recent release of the interned Marian Price: “The logic of today’s release is that Martin Corey should also be freed.” However many Irish Republicans including his own supporters believe this is no longer good enough or acceptable, bearing in mind his position as President of his party, his undertakings of power sharing, when selling the Peace Process to IRA volunteers, the surrender of arms without direct input in matters like core policing, internment without trial, the reluctance to hold the 'Justice' ministry at the Assembly to account and his own history of non-accountability, on critical issues of public importance.

What is causing further scrutiny of Gerry Adams, in the instance of Martin Corey, is that not alone were they both comrades in defending their own community from ethnic cleansing and from the collusion of the British State, with sponsored British sectarian death squads, which included up to a hundred British soldiers and their own British paramilitary police. They were also comrades, when both were interned without trial, in what became known as Long Kesh Concentration Camp. They were tortured together in the British invented Concentration Camps which Hitler used with such infamy. Will the British succeed in dividing them, as they did previously with De Valera and Irish republicans?

Of course "intelligent Irish republicans" as Gerry's colleague Martin McGuinness often says, know that Gerry Adams has not put all his political cards on the table, with regard to this issue or indeed any of the issues mentioned above. However bearing in mind Martin Corey's 63 years and the current fragile state of the 'peace process' the last thing people need or want is another Hunger Strike by a Long Kesh, H-Block internee, bearing in mind the history of Bobby Sands and the total of the 10 hunger strikers, who already died by this last resort of non-violent protest.

Irish republican loyalty in the interest of unity, which has extended over so many years of giving Gerry Adams the benefit over considerable doubt, will hardly extend to letting a fellow volunteer and elderly internee die interned in a British hellhole. Statements as Gerry the pragmatist would himself know, at this stage are hardly enough. .As President of Ireland's largest political party and partner in a negotiated peace agreement and recent event around taking responsibility, he would now know that both his political and moral responsibility are to cease with the use of an elderly Irish internee being used as stick, to wave at the many Spartans, who survived Martins current ordeal, who have serious misgivings about the implementation of promises made. Martin has considerable support in his native Lurgan and indeed most of the British created, sectarian 'murder triangle.'

One of the last recording, made of the previous late President of 'Sinn Fein', who was criticized so much By Mr Adams, Ruairi O Bradaigh quoted, "The woods are lovely, dark, and deep, But I have promises to keep, And miles to go before I sleep, And miles to go before I sleep." Ruairi kept his promises, Will Gerry Adams keep his promises to the people who have learned from bitter experience, is that they rely on people like Martin Corey to defend them and simply cannot trust British Paramilitary police or a disarmed IRA that let them down so badly last time. This is the harsh reality that many new political careerists ignore but which Gerry Adams dare not forget. 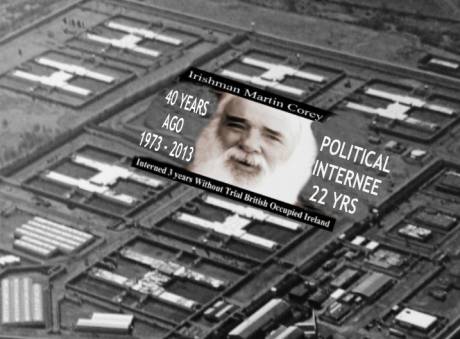