CAMPAIGN Martin Corey | DO IT FOR | Ruairí Ó Brádaigh 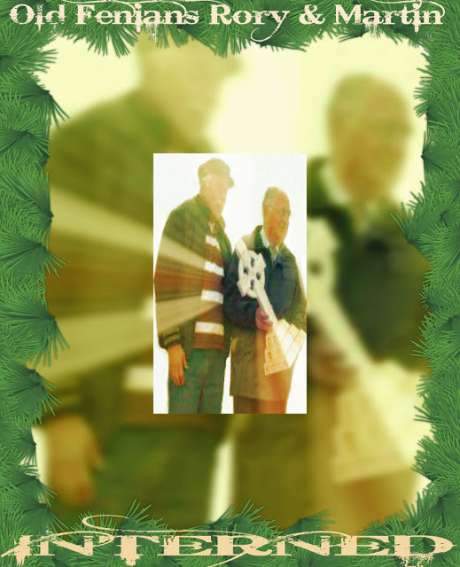 Imagine if you will, being taken from your home, without a reason or charge, by paramilitary police, who regularly collude in murder of lawyers and journalists. You are then imprisoned for three years without being told how long you will remain kidnapped, by these scum state thugs.When a judge is informed about the details of your kidnap, he orders your immediate release. You are taken to the front gate to be released, where you are about to embrace your loved ones, when another dictatorial order, from an unelected English Viceroyal, who inherited her appointed position, from her great, great grandfather, who disappeared millions of your people in a holocaust, orders your kidnap perhaps for the rest of your life, again.Is this mental torture ? Is this a breach of your human rights. In the instance of Martin Corey, bearing in mind the trauma and his elderly 63 years, it may well be in fact a death sentence, with the history of considerable torture, suffered previously by Martin, at the hands, boots and batons of sectarian state kidnappers who imprison you. The last time Britain introduced internment without trial in the early 1970's, Britain was found guilty by the European Court of Human Rights of torture, when Martin Corey was also battered and tortured at that time. Now 40 years later, they are torturing him again. How can there be peace with such injustice in British Occupied Ireland? How can the Peace Process work, with the British Tories systematically undermining and breaching it? With British internment without trial last time, the Nationalist Constitutional Party of the SDLP, was forced to withdraw from a parliament, dubbed by their arrogant scum state establishment, as a Protestant Parliament for Protestant people. How then can a supposed Irish Republican Party, now stay in the very same Parliament, even when their own peace loving members, the latest being John Downey, are also being imprisoned for the death of horses, long before the Agreement.The internment of Marian Price, like the internment of Martin Corey, demonstrated further divisions in the criminal justice system in British Occupied Ireland, following the devolution of policing and criminal justice, after the Hillsborough Agreement of 2010, which was part of the Peace Process. Marian's case demonstrated the ongoing, all embracing dictatorial power, of the English Viceroyal for British Occupied Ireland, in matters of social control and in controversial internment cases, such as Martin Corey. The reliance by the British on closed material procedures, in alleged terrorist cases, is simply internment without trial and of particular concern to human rights groups, in that the Parole Commissioners, are not members of an independent judiciary in British Occupied Ireland, but are in fact British appointed officers, who were the internment agents, determining the conditions in the first instance.The role of the Parole Commissioners in Marian and Martin's case and their lack of accountability and authority, should have been put to the scrutiny of the Political Stormont Assembly Justice Committee of the Peace Process a long time ago. The Parole Commissioners in effect gave authority to the decision of judges made years ago, that Marian Price and Martin Corey should be released on bail pending investigations of the PSNI.It was these decision that the the Viceroyal for British Occupied Ireland ignored, in evoking dictatorial powers, in relation to categories of individuals released or interned under cover of licence, thereby directly interfering with the independence of the judiciary of British Occupied Ireland who ruled years ago, that both Marian and Martin Corey should be released.The powers that could have released Marian Price on compassionate grounds, were not exercised or supported by the supposed Minister of Justice, who misled the Assembly and the public, after being bullied by MI5 and sectarian power brokers in the Assembly. David Ford therefore exacerbated the medical and psychological conditions of both Marion Price and the elderly Martin Corey, as their internment was illegally prolonged.without charge or time frame, which after three years in Martin Corey's instance, is torture and a blatant breach of his human rights, even by the tinpot dictator's standards of Viceroyal kidnap, in British Occupied Ireland. Martin Corey is a fragile old man, who did his bit for his country years ago, like our recently deceased Ruairí Ó Brádaigh. He is a patriot in every sense of the word, of war that had a peace Agreement which the British signed. Martin in his old age, deserves respect, along with the peace and justice he craves for the community threatened with extinction, that he guarded zealously with his life and paid so dearly, with 22 long years of imprisonment, torture and abuse by the British regime found guilty at the European Court. of Human Rights in Strasbourg.Enough is enough, the supremacist British and their sectarian, fascist orange prison regime, have had their pound of flesh, many times over with Martin already. Before the funeral of Ruairí Ó Brádaigh last week, Martin spent 19 years, before being interned for the last three years, lovingly, hand carving the Celtic cross in the photo above, as a mark of the esteem, which he held Ruairi, during those long years of hardship. I am asking all people with compassion, across the sectarian divide, who have respect for their elders and international standards of justice, to campaign on twitter and facebook internationally for Martin Corey. Campaign to Release Martin Corey. Do it for peace with justice. Do it for Ruairí Ó Brádaigh.


Do it for Ruairí Ó Brádaigh.