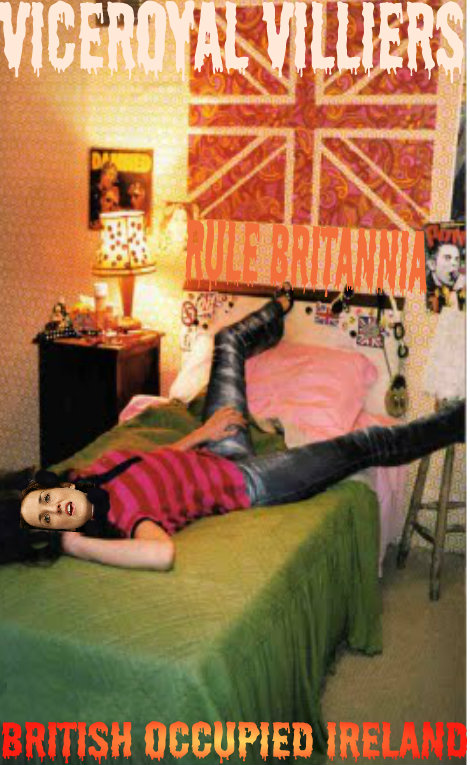 By Finian CunninghamMay 12, 2013 "Information Clearing House" - It’s an anthem that is usually sung with chest-thumping pride and misty eyes by British imperialists. “Rule Britannia, Britannia rules the waves”. This jingoistic celebration of Britain’s former global conquest may yet degenerate into “Rue Britannia, Britannia rues the waves”.
This is because, as The Guardian newspaper reports this week, the London government has at long last been forced into recognizing compensation payments for as many as 50,000 Kenyan nationals who were victims of torture and other crimes against humanity during that country’s independence struggle in the 1950s. The eventual bill for compensation could run up to tens of millions of pounds.

But the bad news for financially bankrupt Britain does not end there. With this precedent established of compensation for past British imperialist crimes, that now leaves the way open for a global flood of similar claims.

Jingoistic British imperialists may therefore soon rue their often-made reference to Britain ruling the waves and so many countries the world over - at the height of the British Empire some 20 percent of the globe’s land mass was under colonial domination. That’s a lot of people who can claim recompense for past British horrors and deprivation.

If the bill for Britain’s crimes against humanity in Kenya alone runs into tens of millions of pounds, then we can easily multiply that sum manifold if the millions of other victims from across the world who suffered under the British jackboot come forward to claim justice.

The Guardian listed just a handful of additional class-action cases for compensation against the British government. They included the former colonies of Cyprus, Yemen, Swaziland and British Guiana. But that’s just the tip of the iceberg when measuring Britain’s global legacy of crimes and human suffering. Many others would include Britain’s dirty wars and repressive colonial regimes in Bahrain, British Somaliland, Burma, Ghana, Nigeria, Northern Ireland, Oman and Zimbabwe. Even that list is far from complete.

Iran presents a challenging case too. After the British-assisted coup in 1953 that led to the 26-year reign of terror under Shah Pahlavi, tens of thousands of Iranians were subjected to torture by the Western-trained and armed Savak secret police. Iranians therefore have a case for compensation against the British government.

Previously, the British House of Lords decreed arbitrarily that no cases for compensation stemming from before 1954 can be brought to an English court. Fortunately for the British establishment, that ruling excludes millions of more potential litigants from former British India, which gained independence in 1947.

Given the appalling suffering inflicted by the British overlords in India - from starvation, massacres, mass imprisonment and destruction of farming and textile livelihoods to give British exporters a competitive advantage - the resulting claims if filed to the Exchequer would definitely spell good night for Britain’s sputtering economy. Far from ruling the waves, Britannia would sink to a watery grave.

But the real point perhaps is more about principle than money - important though material redress is to victims of injustice. What the case of the Kenyans against the British government is really achieving is to strip bare the truth about Britain’s imperial legacy. British national conceit and history books are replete with double standards and moral relativism. It is too widely and fatuously assumed that Britain’s Empire represented somehow a benevolent contribution to history. British people, and unfortunately English-language academia and media across the world, tend to perceive Britain’s “decolonization” - its retreat from imperial territories - as a magnanimous gesture of granting independence. This delusional notion is best summed up in the Orwellian term “the British Commonwealth of nations”.

With conceited moral duplicity, Britain insists that Imperial Japan and Nazi Germany must pay out compensation to victims of their conquests. But no such obligation pertains to Britain, according to the British rulers. Why not? Only imperial arrogance and a certain sense of victor’s justice stemming from the Second World War are invoked to subjectively justify that contradiction. In the world of objective facts and evidence, Britain is equally liable for redress to its global victims of crimes against humanity.

When Britain set out to destroy the Mau Mau struggle for Kenya’s political independence during the 1950s, the British were not interested in benign, passive “decolonization”. For the British rulers, it was a life-or-death challenge to the entire global system of British Empire and its exploitative excrescence on the world. The same British “siege mentality” manifested ruthlessly against the independence movements in all its colonies.

Up to 300,000 Kenyans were incarcerated in concentration camps during what the British euphemistically called “The Emergency”. That same quaint word - “Emergency” - was used by the British to dissemble their barbarism and brutality in Burma against pro-independence communist guerrilla. During Bahrain and Northern Ireland’s struggle for freedom from Britain’s unlawful dominance, the preferred euphemism for repression was “The Troubles”.

But these semantics aside, the nature of repression meted out by British rulers and their officers was systematically criminal and brutal and comparable to the worst genocidal regimes the world has known.

The Kenyan Mau Mau may have suffered the most, probably owing to a twist of racist depravity among the white British counterinsurgency practitioners. Kenyan prisoners were castrated and roasted over fires by British officers using methods of torture that even classified British records explicitly sanctioned as “Gestapo techniques”.

During the British suppression of the Cypriot insurgency during the 1950s, inmates were routinely tortured by water-boarding sessions in which Kerosene was added to the drowning water. Later, during the 1970s in Northern Ireland’s conflict, Irish prisoners were incarcerated without charge and tortured by hooding, prolonged wall-standing, sleep deprivation, white noise and intimidation with guard dogs, not to mention routine physical beatings.

If such torture and generally repressive regimens sound similar to what has since been uncovered in Afghanistan, Iraq and Guantanamo Bay it is because they are wholly consistent. These are the standard operating practices of British military doctrine and that of its close American ally.

The reason why such barbarity continues to be practiced is because of the moral duplicity and propagandized version of history that the Western media and academia instill. Barbarity is something that others perpetrate, not us.

The glacial pace of justice - as shown by the more than six decades’ delay for the Mau Mau victims of British crimes - is reflective of the massive public deception instilled by Western media on behalf of their criminal governments.

However, thanks to the courageous pursuit of justice by many people across the world, this edifice of deception will eventually be broken down. This is imperative as a matter of justice for the millions of victims of British crimes against humanity.

But, in addition, the exposure of British criminality is crucial to deleting the duplicity that serves to give contemporary British and other Western governments a veneer of legitimacy. Britain has no right to pontificate and brow beat Syria, Iran or any other nation about “international obligations”. With the full record of British criminality on display, this is a country that, far from lecturing others, should be made to hang its head in shame and remain silent.
Finian Cunningham, is a prominent expert in international affairs. The author and media commentator was expelled from Bahrain in June 2011 for his critical journalism in which he highlighted human rights violations by the Western-backed regime. He is a Master’s graduate in Agricultural Chemistry and worked as a scientific editor for the Royal Society of Chemistry, Cambridge, England, before pursuing a career in journalism. He is now based in East Africa where he is writing a book on Bahrain and the Arab Spring. He co-hosts a weekly current affairs programme, Sunday at 3pm GMT on Bandung Radio