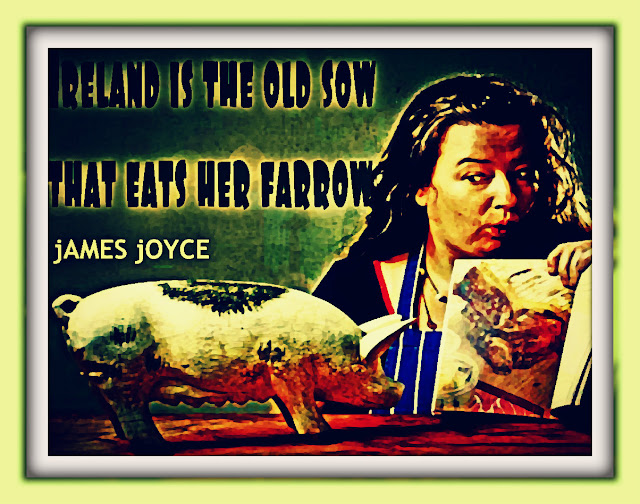 Ireland is the old sow that eats her farrow......  James Joyce

Have you heard of Celtic Tiger Penis Soup, it tastes like oil they say ? Will it  put some fire in your Irish balls or are there any left anymore on the island or have they all emigrated?.The Celtic Tiger apparently lies emasculated, humiliated its Irish slaves, forced-fed gobbledegook, gombeenery, corruption, bankruptcy and poverty. Everyone left in  Ireland is left sucking on the sows sagging, dry, teats.
The vitriol and ignorance from the media pundits and the ordinary brainwashed people,  is shockingly offensive to the real Irish people now overseas.. Now, there is a shame on both Irish scum.states  James Joyce was right  thousands of young people are forced away from both scum states in Ireland. Who in their right mind would want to live in this God forsaken place? No country for old men.
Let the Irish sow with Lipstick Gobble, they deserve their heartless fate !

UPDATED; Pro-Life while Thousands of Babies are Raped

As someone who grew up in the culture of child abuse in east Galway, which now seems to be leading the country's policy on abortion or more accurately the lack thereof, I have always wanted to ask two principal questions, primarily to the enablers of systemic child abuse in Ireland.

Currently despite all the publicity about the culture of child rape in Ireland, the priority is the protection of the unborn to the detriment of the already born. I ask any decent person, if there still exists such a specimen on our island, with an ounce of nature left in them, to think about what I have written and have the courage to make a reply, that makes sense without getting personal. 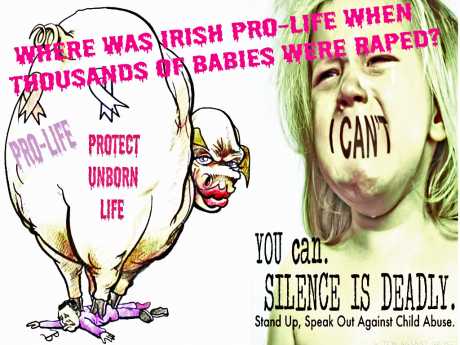 These enablers of the rape of tens of thousands Irish babies, who for decades, thought they might be keeping the family together, or keeping the money coming in but are reality, are still causing more damage to the already abused victims and still causing long-term harm to the child..

Quite often they aren't thinking of the child victims at all but simply choose to stay in a state of denial, to protect their own self interests to prevent themselves from taking responsibility. Its time for these people to move out of the dark ages and into the light.
Which leads me to two questions I have always wanted to get an intelligent reply, from Pro-Life Ireland but have never succeeded. They seem to either censor or are in denial, like all the unprincipled, political parties of Ireland who will not take responsibility or show leadership in this matter.

1.) Can pro-life Ireland accept that Irish born children, should take priority protection over the unborn?

2.) Where was Pro-life Ireland, when tens of thousands of Irish babies were being raped systemically?
Related Link: http://bit.ly/12RZJRy

despite being "pro life", there's no sign of their organisation at anti war protests either.

I don't see them ever demonstrating at Shannon airport.

The fact is, they are only pro life when that life is inside a womans body. They couldn't give a shit what happens to that life once it gets here.

Slave labour, homelessness, no hospital care, cannon fodder, austerity, nope "pro lifers" have no issues with "life" having to endure any of that.

No sign of them petitioning for a better society based on what's good for that life once it gets there. rapacious dog eat dog capitalism / feudalism is just peachy.

It's just reactionary catholicism. Built into the religion itself (and others) is the idea that the catholic population should grow. Any attempts at birth control go against this fundamental principle. That's probably all that's behind this. The outdated notion that If catholics keep having more children without restraint then there will be even more catholics , and hence the religion will grow bigger. It's pretty stupid. But these religious lunatics will happily let women die in childbirth for this.
Catholicism, Fascism and Feminism

Agree and they couldn't even be bothered defend their position..The nightmare is that none of the political parties in Ireland are currently showing any leadership on the matter and will just follow rather than lead. You are correct on the Catholic stuff Fred and it's not by chance that Fascism keeps rearing its head in Catholic societies, as it may very well do in Ireland shortly, as things get worse. I am astounded that Irish women, seem to have such little empathy with their sisters, on so many of these issues. I don't wish to generalize or be sexist but their silence is deafening on, so many issues that directly affect them in Ireland presently, which ultimately affects everyone.
Ire Land of Pigs and Gobbledygook Lipstick

The Land of Pigs and Gobbledygook Lipstick 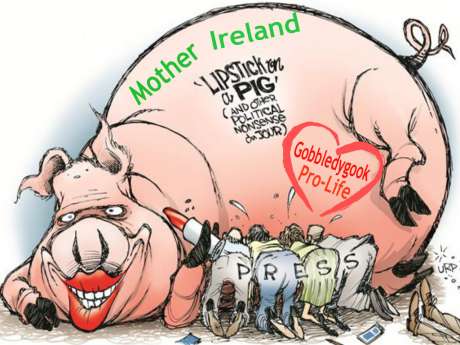 Pro-Choice Gobbledeegook
Related Link: http://bit.ly/RdE2Hk
"They couldn't give a shit ..."

"They couldn't give a shit what happens to that life once it gets here."

NONE OF THEM, in my particular case: apart from my brother who provides me with loans of 500 Euros per month to compensate for the fact that our corruption and criminal ridden Government (Executive, Legislative, and Judicial) STILL refuses to pay me my old age pension, and STILL refuses to provide me with any GOOD REASON for refusing to pay it: because NONE of them HAS ANY GOOD REASON to provide me, or anybody else, with.

But they don't have to have a good reason, because they can all commit crime with impunity, and none more so than the membership of our legal and medical professions: especially of course if the crimes in question are supportive of the banksters: as in my own case, due to my efforts during the past 15 years or to expose the banksters for the outrageous criminals they are. Criminals supporting criminals, that's how I see it: but many of them BIG "pro-life" activists nevertheless.

Consequently, I would agree with you 100% on the point you make in the above piece of text of yours.