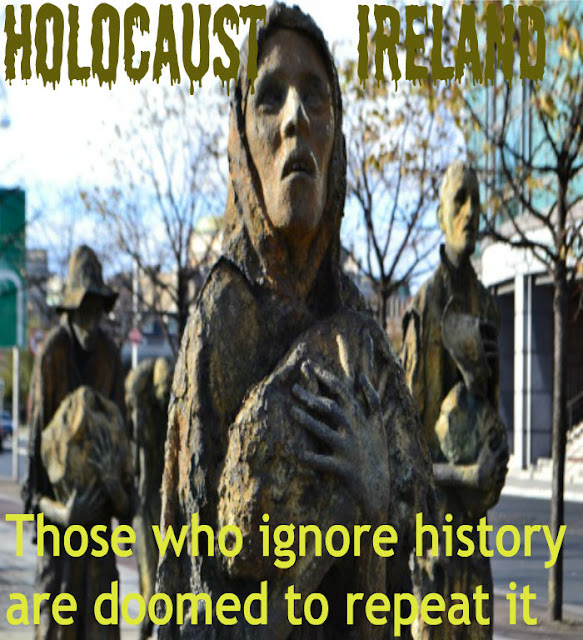 Read this site and weep.

Weep for the agonies and deaths of your people at the hands of genocidists. The authorities who imposed the curriculum, the teachers and professors who funneled it into you, have carefully kept you uninformed as to which British regiment, or that any regiment, murdered your people. Until now, that information was kept from you. You had no access to it.
You do now - you read it on your computer screen! Commit the regiment's name to memory.
Never, ever, forget it!  Learn its British HQ town. As no Jewish person would ever refer to the "Jewish Oxygen Famine of 1939 - 1945", so no Irish person ought ever refer to the Irish Holocaust as a famine.
Is Britain's cover-up of its 1845-1850 holocaust in Ireland the most successful Big Lie in all of history?
The cover-up is accomplished by the same British terrorism and bribery that perpetrated the genocide.  Consider: why does Irish President Mary Robinson call it "Ireland's greatest natural disaster" while she conceals the British army's role?  Potato blight, "phytophthora infestans", did spread from America to Europe in 1844, to England and then Ireland in 1845 but it didn't cause famine anywhere.  Ireland did not starve for potatoes; it starved for food.
Ireland starved because its food, from 40 to 70 shiploads per day, was removed at gunpoint by 12,000 British constables reinforced by the British militia, battleships, excise vessels, Coast Guard and by 200,000 British soldiers (100,000 at any given moment)  The attached map shows the never-before-published names and locations in Ireland of the food removal regiments (Disposition of the Army; Public Record Office, London; et al, of which we possess photocopies).  Thus, Britain seized from Ireland's producers tens of millions of head of livestock; tens of millions of tons of flour, grains, meat, poultry & dairy products; enough to sustain 18 million persons.
The Public Record Office recently informed us that their British regiments' Daily Activity Reports of 1845-1850 have "gone missing."  Those records include each regiment's cattle drives and grain-cart convoys it escorted at gun-point from the Irish districts assigned to it.  Also "missing" are the receipts issued by the British army commissariat officers in every Irish port tallying the cattle and tonnage of foodstuff removed; likewise the export lading manifests. Other records provide all-revealing glimpses of the "missing" data; such as: ...
Posted by Unknown at 2:59 AM