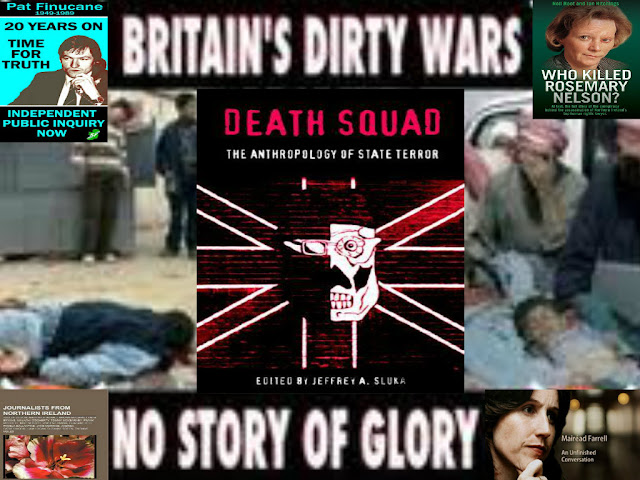 In 2006, it became public knowledge, that Britain's SS(secret services) helped the IRA organize 'human bomb' attacks, in a tactic involving, forcing civilians, to drive car bombs into British army checkpoints with devastating consequence. This was just one of a series, in an evolution of guerrilla warfare techniques, that left many keen observers scratching their heads wondering, who was friend or foe and whose side, several senior British intelligence operatives were on. It came then as no surprise then to many in 1994, when almost all of the UK's senior intelligence experts were wiped out, when a helicopter carrying them crashed at the Mull of Kintyre. These were the elite who had overseen the the dirty war in British Occupied Ireland. For a proper understanding of this, please see a full report below by Finian Cunningham formerly based in Belfast who is Global Research Correspondent on Middle-east and east-Africa affairs.


One of Britain's agents, has spoken about MI5 arranging a weapons buying trips to America, where he received critical equipment, used later by the IRA to kill soldiers and British paramilitary police. He also spoke of UK SS co-operating with the FBI, to make sure everything about his visit to the USA went smoothly and that his cover would not be blown. The technology he obtained in the USA was then used in British Occupied Ireland and has since been copied for use in Iraq and Syria today in roadside bombs which have killed numerous British and American soldiers troops.


Several IRA leaders at the highest level, were trained as members of Britain's SAS special forces, this training of other groups continues to this day. In 1998, a former US Ambassador to the UK claimed that the Administration of a US President leaked critical British intelligence on British occupied Ireland to the Irish Republican Army. The FRU or Force Research Unit was the name used by a covert military intelligence unit of the Defence in the Intelligence Corps of the British Army whose headquarters were at Templer Barracks, at Ashford in Kent. The FRU was formed in 1980 with its Intelligence Corps centre at Thiepval Barracks, British Occupied Ireland, from where it recruited and handled its agents.

The FRU engaged in collusion with paramilitaries and contributed to the assassinations of numerous civilians, human rights lawyers, journalists, British soldiers and police in British Occupied Ireland despite a Peace Process. In 2007 the FRU changed its name to the Joint Support Group (JSG) and has been active in Iraq and Syria. JSG agents are trained to turn civilians into coalition spies and state terrorists using methods developed in British Occupied Ireland.

Since the election of the Tory Government, the Irish Peace Process is being systematically dismantled,  to enable a return to using British Occupied Ireland for further research, using Kitsonian counterinsurgency theories, equipment and the development of further State terrorism techniques. Techniques around internment, torture experiments, water boarding with the famous "14 hooded men" were all passed on to the Americans by the British and used in places like Abu Graib and Bagram. The British seek out "society's psychos" and train them in using these activities.


After the invasion of Iraq in 2003, subsequently in Libya and recently in Syria, the British have been responsible for running hundreds of double agents throughout the Middle-east and in 2003, the former head of the FRU in Ireland throughout the Troubles, Brigadier Gordon Kerr, was sent to the Gulf to head up British activities in the Middle East becoming head of the JSG there.
Today Britain are continues to use the same techniques in Syria, as they did in Libya and Iraq, which they developed during the troubles in Ireland. By re-activating internment without trial, the spark that started forty years of war last time in Ireland, and interning old, iconic, respected Irish republicans in a flagrantly illegal way, without trial, charge or sentence, despite directives from several judges for their release, the British are banking on continuing with their experiments of countering the insurgency they are provoking.