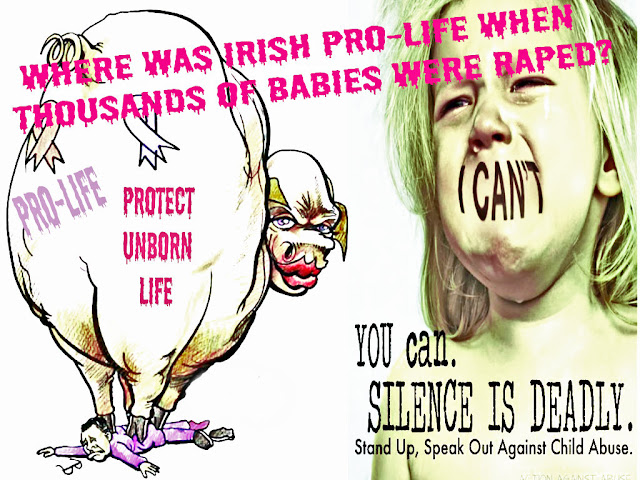 As someone who grew up in the culture of child abuse in east Galway, which now seems to be leading the country's policy on abortion or more accurately the lack thereof, I have always wanted to ask two principal questions, primarily to the enablers of systemic child abuse in Ireland.

Currently despite all the publicity about the culture of child rape in Ireland, the priority is the protection of the  unborn to the detriment of the already born. I ask any decent person, if there still exists such a specimen on our island, with an ounce of nature left in them, to think about what I have written and have the courage to make a reply, that makes sense without getting personal.

These enablers of the rape of tens of thousands Irish babies, who for decades, thought they might be keeping the family together, or keeping the money coming in but are reality, are still causing more damage to the already abused victims and still causing long-term harm to the child..

Quite often they aren't thinking of the child  victims at all but simply choose to stay in a state of denial, to protect their own self interests to prevent themselves from taking  responsibility. Its time for these people to move out of the dark ages and into the light.
Which leads me to two questions I have always wanted to get an intelligent reply, from Pro-Life Ireland but have never succeeded. They seem to either censor or are in denial, like all the unprincipled, political parties of Ireland who will not take responsibility or show leadership in this matter.

1.)  Can pro-life Ireland accept that  Irish born children, should take priority protection over the unborn?

2.)  Where was Pro-life Ireland, when tens of thousands of Irish babies were being raped systemically?