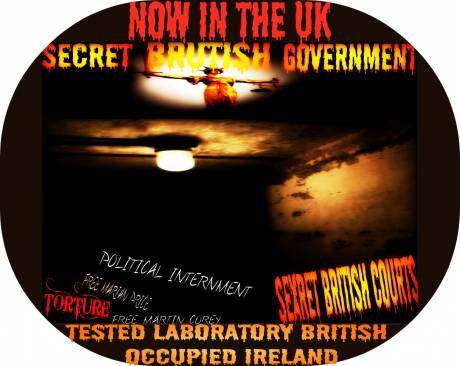 Secret Courts
"This is a terrible day for British justice. After fierce lobbying by the government, peers have failed to restore even minimal amendments previously included to this deeply damaging bill,”
The cherished and vitally important principle that justice must be done and seen to be done has been dealt a serious blow this evening,” said Tim Hancock, Amnesty International's UK campaigns director.

Legal Agency Reprieve executive director Clare Algar said the secret courts will “do irreparable damage. It is deeply shameful that the government has been allowed to push these plans through parliament, despite the total lack of evidence that they are needed. Secret courts will ….. do irreparable damage to our reputation as a country which respects fair play and the rule of law,” she said.

British secret service officials, claim the Bill is designed to protect national security by preventing informers from being exposed.

Amnesty International said earlier, that the plan gives the British government the power to "simply play the 'national security' card whenever it wants to keep things secret". The British government only needs the Queen’s Royal stamp of approval, to start the secret courts as new law in Britain.

Some of the public's reaction in Britain is as follows.

All those lives lost in WW2 just to be ruled by Nazi-s again. Those that died in WW2 must be somersaulting in their graves.- Vincent

When those who oppose some British Government policies like the welfare cutbacks, bank bailouts and banker bonuses, privatisation and illegal foreign wars (like me) or those who complain about injustice start disappearing, losing their citizenship, being renditioned and killed by armed unmanned aerial vehicles (UAV drones) then no one in any central or local government roles including ALL employees, councillors, MP's, and other politicians can be trusted. The number of people who criticise the British Government will rapidly reduce when the secret courts starts. It will not affect organisations like the SWP, EDL, BNP as they are funded by the Zionists, Bankers and operated by the security services MI5 and MI6 in order to control and suppress dissent among the sheople.- Student

The silence from the British legal fraternity in academia and in legal practice is shocking and a shameful indictment on the" profit without ethics" system that has pervaded every aspect of British life today. Justice must not only be done but be SEEN to be done. Having secret courts is an attempt to avoid scrutiny of checks and balances, to ignore rules of evidence and deny an accused person the right to defend themself agianst the mighty apparatus of state.
- jam

That's why UK raceist authorities have been busay to make fake-secret documents against people they have targeted. They abuse people in UK and claiming that they have secret information about them, the information they have fabricated. UK has returned back to the medieval time. - Pam Cox

UK abused people for years and now want to kill them through their secret court so that nobody will realise what happened to them. UK is just trying to destroy the evidence of their abuse and mistreatment for the past decade so that created a legal support for themselves. I'm sure that the lives of thousands innocent people in the UK are at risk. - A Solicitor

My God, my ancestors will be turning in their graves. The Tories are finally realising what they have long dreamed of - throughout the years of the post-war settlement, they moodily incubated a determination to reverse the social and economic gains fought for and won by people of unparalleled toughness and determination, people who took on the might of privilege and wealth and defeated it. This is the New Tory moment; this when they come out from behind their cosmetic masks of reasonableness and fairness and social concern and display their true dark hearts before the world.

But I reserve my greatest contempt for those of us on the left; this is all happening on our watch. We betray those people I mentioned above, who vanquished the landowners and the factory and coal owners. And what are WE up against? a couple of Bullingdon hooray-henries and a leadership reject with the political acumen of petrified bird droppings . But the neoliberal apologists and careerist politicians that have infested the Labour Movement see only the votes of bigoted Middle Englanders and the ignorant Sun reading dross that posts here waiting to be harvested. The latter busy calling for their own enslavement, too ignorant or misinformed to notice the turkey staring back at them in the mirror of a Christmas Morning. And in the new Dark Age heralded in by IDS, every morning will be Christmas Morning for the beneficiaries, the businesses who will exploit this measure to access free labour, the talk of charities being a transparent smoke screen to hide the fundamental dismantling of the human right for a fair day's pay for a fair day's work.

Make no mistake, this is just the beginning. Anyone who thinks that once the principle of unpaid labour has breached the social repugnance it generates that it will stop at a month's work for 'idlers' is the kind of fool the Tories are relying on get this through. These are the descendants of people who built vast fortunes and empires on the sweat and death of their factories and workhouses; they are past masters at dressing up inequality and evil in Protestant work ethics and biblical rhetoric denouncing the peril of idleness - except where it's practised in its purest forms of course, by digital fortune shufflers and land owning parasites drawing their subsidies while they indulge Mediterranean waves with their oversized cock-yachts.

Shame, shame on us all. Tolstoy said everyone was innocent. I say everyone is guilty. And our children will never forgive us for allowing this to happen. The Tories talk of not saddling future generations with our debt; I think only of future generations facing the return of evils greater than any debt, that we had long thought banished from the lexicon of social intercourse and post war economics, all presented as some kind of economic panacea. Who is really 'taking the piss' here?

No doublethink, no prevarication, no quarter.

The Wikileaks Documentary
Posted by Unknown at 11:01 AM