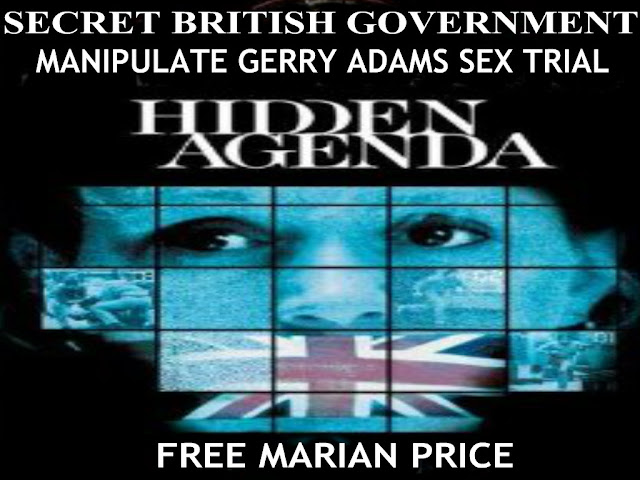 Dolours Price beofre her recent death, claimed that Gerry Adams her "Officer Commanding" in the IRA ordered her 18 year old sister Marian Price to go to London and carry out a military operation, that according to the British, is responsible for the current internment of Marian Price 40 years later. Adams, who has never admitted to being an IRA member, denies the allegation.

If what the British say is true, then clearly Gerry Adams has major responsibilities in the matter, that he is ignoring, in the same way as he ignored his responsibilities around the rape of his niece Aine Adams.

By refusing to take responsibility in both matters he has contributed to considerable agony in the lives of both these young women at the time. As a critical part of a Peace Process without Due Process in Ireland and apparently a very devout Christian, these are critical immeidate matters of leadership to restore basic credibility to his legacy. Make no mistake about it, Gerry Adams and provisional Sinn Fein, do have the political leverage, to end all political internment without trial in Ireland.


Critics of Gerry Adams and provisional Sinn Fein claim they have played a political game with Marian Price, and the Irish people, that if she wasn't so high profile "they wouldn't give a flying f*ck about her". They say provisional Sinn Fein know she has a great deal of sympathy and respect, particularly in her native west Belfast.

They maintain that provisional Sinn Fein have called for republicans who don' follow their strategy to be locked up, labelled principled, traditional Irish republicans criminals, traitors and conflict junkies. Critics say that Gerry Adams and provisional Sinn Fein used their political clout to relase Sean Kelly, the McCartney suspect and countless other political ex-prisoners and most certainly have the political leverage to have Marian Price released. Others have cut Adams alot of slack giving him the benefit of the doubt but he is clearly and rapidly running out of time and with him, all credibility around an Irish Peace Process without Due Process.


There is however one current event, clouding the political leverage Gerry Adams, as President of Ireland's largest political party actually has and that is the current trial of his brother for his daughter's rape. Aine Adams, daughter of Gerry Adam's brother, has waived her right to anonymity, saying she had gone to the British paramilitary police RUC/psni (Royal Ulster Constabulary/psni) in 1986  at the height of the Troubles but found British police officers preoccupied with her uncle, the Gerry Adams the provisional Sinn Fein president.

"The police were more interested in Gerry Adams. They were trying to get information about where he was and who he was with. Back then you did not really trust or talk to the British police. We had to leave it. We felt it was safer for me and mummy. I had to go up to the barracks and say I wanted to retract my evidence. I did not say I was telling lies, I just said I wanted to retract it."

Liam Adams, 57  is on trial accused of 10 counts of sex abuse including rape, gross indecency with a child, indecent assault between 1977 and 1983. He has denies all of the charges.

A jury of six men and six women at Belfast Crown Court were shown a recorded interview in which Ms Adams,  alleged her father exploited every opportunity to sneak into her bedroom and abuse her from when she was aged between four and nine-years-old.

"It was as often as he could manage. If he could sneak in. That just seemed to be the way it was. Every opportunity there was he would have done it. Even if he didn't I would have expected him to do it," she said.

The abuse was carried on regularly at four different addresses across Belfast, she claimed.

Ms Adams, said she can vividly recall a number of specific incidents that happened between the ages of four and five-years-old.

"I remember him coming in, I think I had wet myself, touching me and getting me to touch him, him saying that I could not tell anyone and that we were going to run away to Kerry together," she said.

It was like I was being suffocated by him. I couldn't breathe. I was roasting, I could smell the drink off him. I felt that he has had the power over me."I remember feeling bad. I knew he should not have been doing it. I would have felt guilty as well. I knew I was part of something wrong," she further said that she had felt unable to stop the abuse because she did not want to upset family members and she had come to accept it as part of her life.


After the death of her grandmother, Ms Adams felt compelled to speak out because she realized her father had another two-year-old daughter, whom he was living with in Donegal.

"I just snapped one day and wrote my mummy a letter and told her everything that happened because I did not want it to happen to his wee daughter.It is not about hate or revenge or pity. It is just to hear him saying 'no you weren't lying, I did it',"

She said she wanted to protect this 2 year old baby and that at the age of 13 Ms Adams, her mother and uncle Gerry had also confronted her fatherLiam at a house in Buncrana.

"He denied it to my face. I told him to his face that he did it. At that time that's all we could have done," she said.

The British are trying to censor the trial and matters relating to the political internment of Marian Price claiming that because this case is sub-judice, it is in-opertune to opinionate because it could prejudice its outcome. There is considerable scrutiny in Ireland of the trial, along with considerable speculation about the extent of Gerry Adams and provisional Sinn Fein being politcally compromised by the matter.

Many disagree, pointing out that it is largely irrelevant whose brother an accused actually is, however such caution was not exercised by the British before the trial of the Guilford Four or Birmingham Six. It certainly has not been exercised in the case of Marian Price who has been interned without trial for almost two years and been demonized by the British press.

While Gerry Adams and provisional Sinn Fein have expressed faint protest at Marian's internment with public statements. The normally mild SDLP, have been much more active on the issue and indeed brought down the Stormont adminsitration the last time internment without trial was inroduced in British Occupied Ireland. Provisional Sinn Fein on the other hand who claim to be a republican party, seem to have no such principles of  republican democracy.

MI5 and the British SS in general are known to use blackmail to control both loyalist and provisional politicians, the judiciary, the PSNI, the media and social services. Some claim the British secret services, control almost all elected politicians in British Occupied Ireland, with blackmail on matters related to child rape, satanic rings of orangemen, with sacrificial baby murdering ceremonies across all of Ireland. One thing is certain the Adams family trial is but the tip of the iceberg.