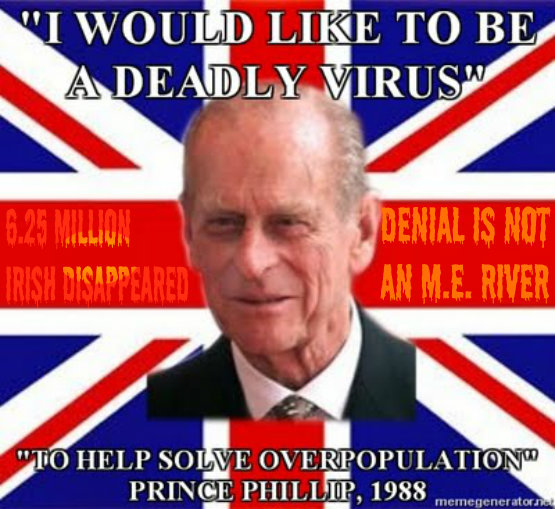 As a result of British sponsored revisionist history, many people are unaware, that while Irish farms were producing plenty of other foods, including corn, wheat, barley and beef, food was taken  away by the British Government, under the noses of the starving six million children, women and men. It was taken to wealthy England by the armed guard of the British Army, who were under orders to ethnically cleanse the native Irish from Ireland.

The six and a quarter million disappeared Irish surpasses even the numbers in the Holocaust visited on the Jewish people later, by the Nazis. For confirmation see the the present Viceroyal in British Occupied Ireland Theresa Villiers family tree a direct descendant of the then Vice royal in Ireland,  George Fredrick Villiers (1800 - 1870).

While you are at it, you might ask Ms Villiers, about the current political internment without trial in British Occupied Ireland of Marian Price and Martin Corey as happened in Hitler's concentration camps. The Irish Holocaust unlike the Jewish one has been airbrushed history by mentored, historical, revisionists.

A good contribution to truth and reconciliation in Ireland, can be kicked started by the British Government, making amends on a relative scale, to what the German Government made in war reparations and amends, for their holocaust visited on the Jews.

Holocaust denial is a criminal offence in Europe. The criminal Tory Regime in Britain should be changed, imprisoning these criminals for another trial in Nuremburg or Strasburg in a very public way unlike the secret ones of the British Nazi regime, the inventors of the original Concentration Camp to exterminate children, women and men.

The Duty to Avoid a War in Korea

April 05, 2013 "Information Clearing House" -  A few days ago I mentioned the great challenges humanity is currently facing. Intelligent life emerged on our planet approximately 200,000 years ago, although new discoveries demonstrate something else.
This is not to confuse intelligent life with the existence of life which, from its elemental forms in our solar system, emerged millions of years ago.
A virtually infinite number of life forms exist. In the sophisticated work of the world’s most eminent scientists the idea has already been conceived of reproducing the sounds which followed the Big Bang, the great explosion which took place more than 13.7 billion years ago.
This introduction would be too extensive if it was not to explain the gravity of an event as unbelievable and absurd as the situation created in the Korean Peninsula, within a geographic area containing close to five billion of the seven billion persons currently inhabiting the planet.
This is about one of the most serious dangers of nuclear war since the October Crisis around Cuba in 1962, 50 years ago.
In 1950, a war was unleashed there [the Korean Peninsula] which cost millions of lives. It came barely five years after two atomic bombs were exploded over the defenseless cities of Hiroshima and Nagasaki which, in a matter of seconds, killed and irradiated hundreds of thousands of people.
General Douglas MacArthur wanted to utilize atomic weapons against the Democratic People’s Republic of Korea. Not even Harry Truman allowed that.
It has been affirmed that the People’s Republic of China lost one million valiant soldiers in order to prevent the installation of an enemy army on that country’s border with its homeland. For its part, the Soviet army provided weapons, air support, technological and economic aid.
I had the honor of meeting Kim Il Sung, a historic figure, notably courageous and revolutionary.
If war breaks out there, the peoples of both parts of the Peninsula will be terribly sacrificed, without benefit to all or either of them. The Democratic People’s Republic of Korea was always friendly with Cuba, as Cuba has always been and will continue to be with her.
Now that the country has demonstrated its technical and scientific achievements, we remind her of her duties to the countries which have been her great friends, and it would be unjust to forget that such a war would particularly affect more than 70% of the population of the planet.
If a conflict of that nature should break out there, the government of Barack Obama in his second mandate would be buried in a deluge of images which would present him as the most sinister character in the history of the United States. The duty of avoiding war is also his and that of the people of the United States.

Right On.
Thank you for your efforts to prevent a calamity. I did not realize 5 out of 7 Billion lived in this area. It is unfortunate that I know that now. Seems that this information would offer that gang of 7 an opportunity to reduce the worlds population quickly as at the least expense.  We are all victims of their greed and arrogance.

@Peter J DeLuca this is no solution... it would traumatize the survivors for aeons...