PADDY'S DAY INTERNIN MEN & WOMEN FOR THE WEARIN OF THE GREEN 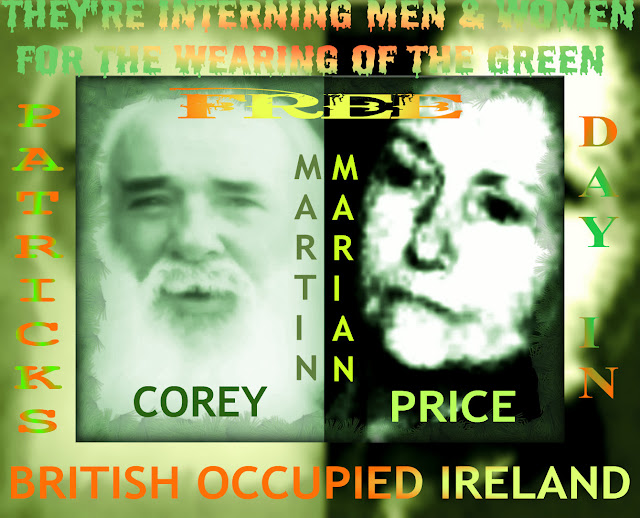 11 January 2012
The PFC is arguing for the release of Belfast woman Marian Price and Lurgan man Martin Corey from Maghaberry jail on the basis that both are effectively interned without trial — contrary to all domestic and international human rights standards.
Ms. Price was sent to jail last May by an order of the Northern Secretary, Owen Paterson, after holding a script for a masked representative of the "Real IRA" to read at a 32 County Sovereignty Movement Easter commemoration.
Paterson has revoked the licence releasing her almost 30 years earlier from a life sentence for the 1973 IRA bombing of the Old Bailey. Her lawyers say she was freed from that sentence on the basis of a royal pardon which supersedes Paterson’s powers and which, anyhow, appears to have been shredded.
Ms. Price, aged 57, who is seriously unwell and in constant pain, has now spent eight months in Maghaberry, in solitary confinement, not having been convicted of any crime. We are currently awaiting news from the Independent Parole Commissioners about her possible release.
Similarly, the PFC is concerned at the continued detention of Lurgan man, Martin Corey, aged 61, who also remains behind bars — also without being tried or convicted of any crime.
Convicted of a double murder in December 1973, he was sentenced to life imprisonment at the age of 19, spending the next 19 years in jail before his release, on licence, in June 1992.
On 16 April 2010 he was taken back into custody, the only reason so far given that he is a "security risk" citing allegations that he is a dissident republican. His legal team have described this "evidence" as "closed material".
Corey has begun a judicial review against the Independent Parole Commissioners on the basis of the alleged secrecy surrounding the reasons, citing a lack of detail on the evidence used which makes it impossible for him to appeal.
His solicitor says the European Court of Human Rights and the House of Lords have both made it clear that details must be given in such circumstances. A full hearing is due in March.
The PFC’s view is that the politics of both prisoners are irrelevant, that their rights are being ignored and both should be released forthwith. Anyone who shares this view is encouraged to write to Owen Paterson at Stormont.
ends