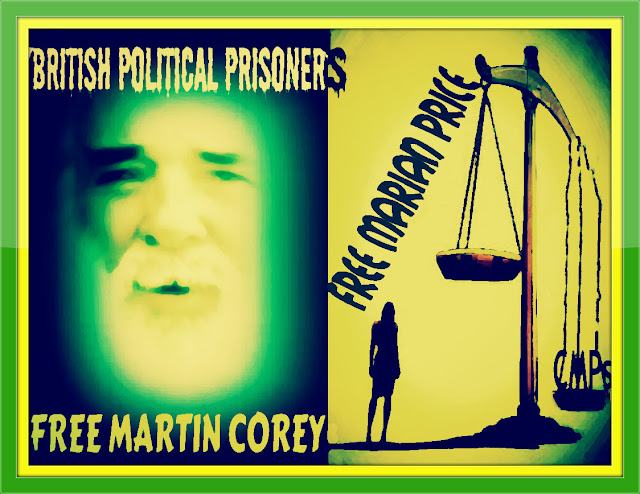 Tory Minister Ken Clarke is this week accused of lying to parliament, with disinformation to confuse legislators, a few days ahead of the Tory government's plan, to introduce secret courts before a backdoor critical vote in the House of Lords, to rubber stamp internment, without a proper trial. Currently with the internment of veteran Irish republicans, Marian Price and Martin Corey, the British have like many aspects of what they term 'security,' being experimenting with Irish guinea pigs and resulting public reaction once again, in the backwater police state laboratory, that British Occupied Ireland.


Human Rights Campaigners in London claimed yesterday, that the Tory Minister gave false information, about whether the ancient writ of habeas corpus, will be destroyed by the justice and security bill. Yesterday's accusations against the Tory Minister come on top of accusations, that the Tory Government since coming to power, have been thrashing the Irish peace process. The reintroduction of Internment without trial In British Occupied Ireland, has confirmed for many Irish proponents of the peace process, the 800 year old pedigree of the invading beast that is 'Perfidious Albion' in Ireland.


Gerry Adams recently claimed that Tory British Prime Cameron has stepped away from the peace process since coming into power. (Diplomatic speak for reneging on the Agreement.) He said “Since the election of the Tory/Lib Dem coalition the British prime minister, has detached himself, from the continuing promotion and development of the peace and political processes,” Adams also said for anyone paying attention, that the UK government had refused to honour commitments in the Good Friday, Weston Park and St Andrew’s Agreements: that are part of Irish Peace Process. Adams further mentioned the British reneging on calls for inquiries into several incidents, including the murder of lawyer Pat Finucane, the Dublin and Monaghan bombings, and the 1971 Ballymurphy Massacre, in which 11 people were killed by British security forces in Belfast.


He said Cameron had stepped away from commitments given in the peace process since coming to power and added the British need to bring forward a timetable for the implementation of all outstanding aspects of the Peace Process, which included the need for a Bill of Rights and an Irish Language Act in the North. He tactfully did not mention the obvious alternatives if the Tories continue to trash the Irish "Peace Process.'


Habeas corpus used in Britain since 1305, is regarded as one of the fundamentals of human rights and is used by lawyers to demand a prisoner be released immediately from unlawful detention used as a basic safeguard of liberty in democracies worldwide. Were secret courts, known as "closed material procedures" (CMPs),  be allowed to the feudal Tories, human rights campaigners believe, many perfectly innocent people, particularly political prisoners like Marian Price and Martin Corey will spend the rest of their lives interned without a proper trial, without knowing why, because of secret evidence, charges and sentences being used against them, deemed too sensitive to allow challenge.


Just days before a bill sanctions changes, expanding the use of secret hearings into the mainstream judicial system, human rights lawyers say the Tories are using disinformation on CMPs and habeas corpus claims, to confuse legislators and the public. With the new legislation and the privatization of the prison business, Tories and their friends, plan to create a highly lucrative billion pound business and intern indefinitely, cheap labour and any form of dissent.


Tory Minister Clarke betrayed himself as a liar, by contradicting himself, when he stated earlier this month, that it would not impact habeas corpus, while later in the same session, he changed his reply, to reading out a note from a Government lawyer, which said the Tory government "can't envisage" a situation where habeas corpus would conflict with secret courts. However the Tory Cabinet Office itself, has now confirmed, secret courts could be used in habeas corpus claims, in instances where a "judge has found, that their use, would be in the interests of the fair and effective administration of justice." Lord Wallace, advocate general for Scotland, has confirmed to parliament that this was a possibility and that a Home Office minister, had confirmed this just last month.


Clarke was obviously on a mission to confuse when he further told MPs that the issue of habeas corpus and closed material procedures had "bowled me middle-stump" and that the government "ought to be allowed to go away and consider the matter." Essentially disinformation with a nod and a wink to legislators, compromised by the 'secret services'. Human rights campaigners say, that the Commons has still to be updated, even though the bill reaches its final stage within days.


Clare Algar, director of Reprieve, said: "Ken Clarke has misled parliament over the impact of the secret courts bill. He told the Commons secret courts could not be used in cases where someone's liberty is at stake, yet now his own department has been forced to admit that this claim was wrong. Under the government's plans, it will be possible to use secret courts in habeas corpus claims – the ancient right we all have to demand that we are either given a trial or released from custody.


This bill strikes at the heart of the principle that everyone has the right to a fair trial and that no one, not even the government, is above the law. Given the significance of these changes, it is disgraceful that we are seeing obfuscation and misinformation from ministers, even at this late stage.It is hard to see how anyone can now believe any of the reassurances given by the government on the secret courts bill. MPs and peers must do everything they can to stop these dangerous proposals from wrecking our justice system."


While spokesperson for the Tory Cabinet Office says: "Habeas corpus cases involving national security evidence are extremely rare. Under the bill, a CMP could only be used in such a case where a judge has found that their use would be in the interests of the fair and effective administration of justice. Even then they could only be used to hear those pieces of evidence which that same judge has found are national security sensitive."


Gareth Pierce who successfully liberated the Guilford Four and Birmingham Six, overturning previous political verdicts, said,  "In Britain, Blair bulldozed through parliament a new brand of internment claiming that Britain faced a similar emergency. This resulted in the arrest on 17 December 2001 of 12 foreign nationals living in Britain who were all sent to Belmarsh prison. These men have been locked up indefinitely without trial, never told the accusations against them, never questioned, never spoken to by the police, the detainee's lawyer not permitted to see the evidence against him. Nothing this bad happened during the Irish conflict." Gareth hasn't obviously heard of Long Kesh Concentration Camp, Marian Price or Marian Corey but then she is a busy woman and British censorship is pretty effective.


Gareth Pierce argues from the perspective of her considerable experience, that miscarriages of justice, which internment without a proper trial clearly is, in the context of the forty years of war in British Occupied Ireland. "Central to the anger and despair that fuelled the conflict, was the realization, that the British courts would offer neither protection nor justice.This should be always in our minds as we analyse the experiences of our new suspect community. A constant theme with Gareth Pierce is that justice dies, when the law is co-opted for political purposes.While she says "Justice has been subverted many times in this country for political ends that seem hard to credit." The Tories in trashing the Irish Peace Process obviously have no qualms about subverting the course justice if the the political internment of Marian Price and Martin Corey are anything to go by.