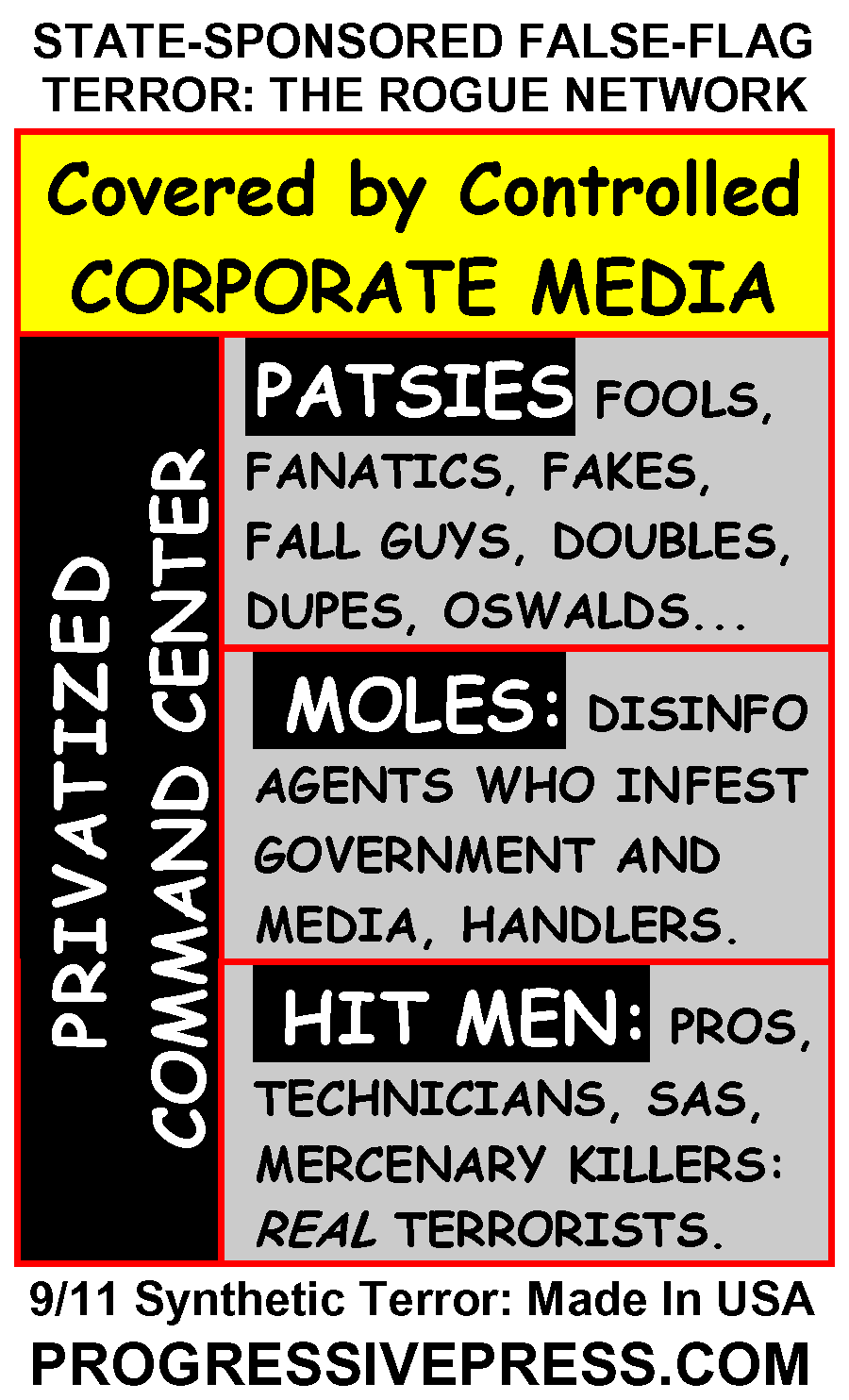 Highest Decorated Gen. Smedley Butler wrote a book titled "WAR IS A RACKET" in which he stated, "I thought I was﻿ defending Freedom & Justice for all but I was just serving banking interests". The interview in this video with a high ranking US Major General, who was in charge of the entire US military Intelligence network worldwide, shows a genuine sincere man, exposing the 9/11 narrative, to even more serious questions by the international body politic and scientific academics worldwide.

The interview demonstrates the frustration of a man that can be absolutely trusted, realizing that after a lifetime of service to his country, it turns out the real enemy is within.With more and more disclosures, informed opinion around the world, is starting to face the shocking realization, their governments are the puppets of deception, with the implementation of brutal legislation, based heavily on events like the Dublin Monaghan Bombings, London 7/7 and the 9/11 narrative.

As these truths settle in our psyche, of obscenely rich powerful elites ruining our world for ultimate personal power and money, using legalized state terrorism, based on the 9/11 type narratives, in places like British Occupied Ireland, one of the British Prime Minister David Cameron's closest advisers has recently described the murder of a Belfast lawyer Pat Finucane, perceived to be “a thorn in the side” of the British Government and it's secret services, as far worse than anything alleged in Iraq or Afghanistan, as it's High Court in London witnessed recently.

A significant statement, bearing in mind that a public inquiry currently in London, released graphic evidence of murdered, mutilated and tortured Iraqi detainees on a scale even greater than Abu Graib. The inquiry was shown gruesome photographs of bloodied corpses on Monday of last week. The allegations are, that soldiers captured a number of Iraqis during fighting near the Danny Boy checkpoint, about three miles from the town of Majar al-Kabir and took them to the Camp Abu Naji base, where they were murdered and others tortured.

The first morning of hearings produced a summary of the death certificates of more than 20 prisoners, whose bodies were handed over to local people, near the gates of Camp Abu Naji. According to the certificates, three of the bodies bore signs of torture including missing eyes, a missing penis and crushed bones.The inquiry was then shown graphic photographs of dead bodies with bloody wounds. One of them a prisoner with a metal watch around his wrist and his hand cut off. Several prisoner's bodies were completely disfigured.


Stressing the gravity of state terrorism in British Occupied Ireland, in correspondence with the Prime Minister, on Britain's murder of lawyers in Ireland, he was asked: “Does the PM seriously think that it's right to renege on a previous Government's clear commitment to hold a full judicial inquiry? Cameron replied, “This was a dark moment in the country's history — far worse than anything that was alleged in Iraq/Afghanistan.


To the retort, “I can’t really think of any argument to defend not having a public inquiry. What am I missing?” A reply email stated that the Prime Minister “shares the view this is an awful case, and far worse than any post 9/11 allegation”, the court heard. The British Prime Minister then confided personally to the family of the lawyer, that there were people in the corridors of power in London, who would not allow any inquiry, confirming that the secret services are now calling the shots in both the UK and the US post 9/11, Dublin/Monaghan, 7/7.


The significance of all of this, is that British extrajudicial killings are now legally unaccountable, while ordinary people remain uninformed with a compromised fourth estate. The single most extraordinary power as a result of 9/11, Dublin/Monaghan, 7/7,  is that it puts the secret services firmly beyond any democratic checks and balances. Lawless secret courts are the new norm, with covert operations including overthrowing or manipulating democratically elected governments, assassinating heads of state and key officials, snatching individuals for political internment, permitting torture and using all instruments of state terror imaginable.

All of this incompatible with democracy while no one is safe anywhere. Targeted assassinations by Britain will continue to expand worldwide.Rule of law principles in secret British courts don't matter. Kitsonian counter terrorism takes no prisoners. State-sponsored terrorism has authorized extrajudicial murder, not just in British Occupied Ireland post 9/11 but also in Britain itself. Hype about Peace Process without Due Process or justice is just that, hype.

So where do the future generations of Irish children who watched their beloved mothers and  fathers murdered in front of their eyes go for justice? What does a Peace Process mean to them? How sincere are all those politicians, media editors and peace activists who call for peace without serious efforts for justice ? What do we tell the families and loved ones who might consider, in the absence of law or justice, taking it into their own hands? These are important serious questions for anyone who considers themselves a citizen rather than a commoner.

SIR JEREMY HEYWOOD, NOW THE CABINET SECRETARY, ALSO QUESTIONED WHETHER THE PRIME MINISTER BELIEVED IT WAS ETHICAL TO “RENEGE” ON A PREVIOUS BRITISH GOVERNMENT'S COMMITMENT, TO HOLD A PUBLIC INQUIRY INTO A KILLING, HE REFERRED TO AS “A DARK MOMENT IN THE COUNTRY'S HISTORY”, A JUDGE WAS TOLD.DETAILS OF EMAILED CORRESPONDENCE BETWEEN THE TOP CIVIL SERVANT AND ANOTHER SENIOR DOWNING STREET OFFICIAL WERE REVEALED AS LAWYERS FOR THE BRITISH STATE MURDERED LAWYER FINUCANE'S FAMILY, PRESSED FOR COMPLETE DISCLOSURE OF NOTES OR RECORDINGS FROM A SERIES OF MINISTERIAL MEETINGS.

The phrase implies that with knowledge or education one's potential or abilities in life will certainly increase. Having and sharing knowledge is widely recognised as the basis for improving one's reputation and influence, thus power. This phrase may also be used as a justification for a reluctance to share information when a person believes that withholding knowledge can deliver to that person some form of advantage. Another interpretation is that the only true power is knowledge, as everything (including any achievement) is derived from it.

From Wikipedia, the free encyclopedia:

In adult discourse the phrase "connect the dots" can be used as ametaphor to illustrate an ability (or inability) to associate one idea with another, to find the "big picture", or salient feature, in a mass of data.
Reuven Feuerstein features the connection of dots as the first tool in his cognitive development program.

The anthrax attacks in the form of anthrax letters in the days following 9/11 delivered the second punch and kept the climate of fear going thereby paving the way for the Patroit Act to go through.

The Dublin and Monaghan bombings of 17 May 1974 were a series of car bombings inDublin and Monaghan in the Republic of Ireland. The attacks killed 33 civilians and wounded almost 300 – the highest number of casualties in any one day during the conflict known as The Troubles.
A loyalist paramilitary group, the Ulster Volunteer Force (UVF), claimed responsibility for the bombings in 1993. The month before the bombings, its status as a proscribed organisation in the United Kingdom was lifted by Merlyn Rees, Secretary of State for Northern Ireland. There are various credible allegations that elements of the British security forces colluded with the UVF in the bombings. The Irish parliament's Joint Committee on Justice called the attacks an act of international terrorism involving British security forces.[1] These allegations are contested by both the British Government and the UVF.
The attacks happened during the Ulster Workers' Council Strike, which was a general strike called by hardline loyalists and unionists in Northern Ireland, who were opposed to the moderates' Sunningdale Agreement and the Northern Ireland Assembly. Specifically, the strikers opposed the sharing of political power with Irish nationalists, and the proposed greater role for the Republic of Ireland in the governance of Northern Ireland. The strike led to the downfall of the Assembly on 28 May.
No warnings were given before the bombs exploded. Three exploded in Dublin during rush hour (killing 26 people and an unborn child) and one exploded in Monaghan ninety minutes later (killing 7 people). Most of the victims were young women, although the ages of the dead ranged from five months to 80 years. No-one has ever been charged with the attacks
On 7 July 1993 the British television station Yorkshire Television broadcast, as part of First Tuesday series, the documentary Hidden Hand: The Forgotten Massacre,[21] a programme on the bombings in co-operation with a number of retired officers in An Garda Síochána, the police force of the Republic of Ireland. The programme claimed that the bombings were the work of the UVF. It named a number of UVF members whom it said had taken part in the bombings, and who had since been killed during the Troubles. These included Billy Hanna, Robert McConnell, Harris Boyle, and a key loyalist, whom the producers referred to as "the Jackal". The latter was later identified as Robin Jackson, who was still living at the time of the broadcasting, and the programme's producers had feared an accusation of libel. William "Frenchie" Marchant was named as the leader of the Belfast UVF gang known as "Freddie and the Dreamers", which had hijacked the cars used in the bombings.[22][23] Hidden Hand also claimed, however, that loyalist paramilitaries were aided by British security force members.

Forensic examination seemed to suggest that the Dublin bombs had been built with some sophistication.[24] Garda officers claimed that the UVF had been assisted by elements in the British security forces. Subsequently, a number of questions were asked in the Dáil, the parliament of the Republic of Ireland, about responsibility for the massacre. The government ordered the Gardaí to assess the information in the television programme.
There was a precedent for bombing Dublin at politically strategic times. The first car bombing of Dublin occurred on 1st December 1972 when the Amendment to the Offences against the State Act was due to be voted on in Dail Eireann. The Amendment looked set for defeat but, in the immediate aftermath of the bombings, the Fine Gael party changed their mind and the legislation was rushed through both Houses of the Oireachtas during the following day. The legislation was designed to give the Gardai more powers against the IRA.
The attack itself was cold-blooded and premeditated murder, aimed at the civilian population, designed to claim the maximum number of lives. These were no-warning car bombs set to explode at the busiest hour of the busiest day of the week - 5.30pm on a Friday evening. This was not a case of failed or inaccurate warnings and it is likely that many more would have died but for the fact that a bus strike prevented many shoppers from getting into the city.
In the immediate aftermath of the bombings, the Irish government appeared to adopt a fatalistic attitude. The Taoiseach, Liam Cosgrave, made an extraordinary speech to the nation on the evening of the bombings in which he suggested that "any person who ever practised violence or preached violence or condoned violence must bear a share of responsibility for today's outrage".
Speeches by the minister for justice, Paddy Cooney, the minister for posts and telegraphs, Conor Cruise O'Brien and the attorney general, Declan Costello, endorsed this view that the victims, that is, the citizens of the Republic of Ireland, were to blame.
The attorney general went so far as to state that any Irish citizen who had even entertained the thought of supporting the IRA's campaign, was every bit as guilty of the slaughter of the victims of Dublin and Monaghan as those who had planned and carried out the atrocity. "