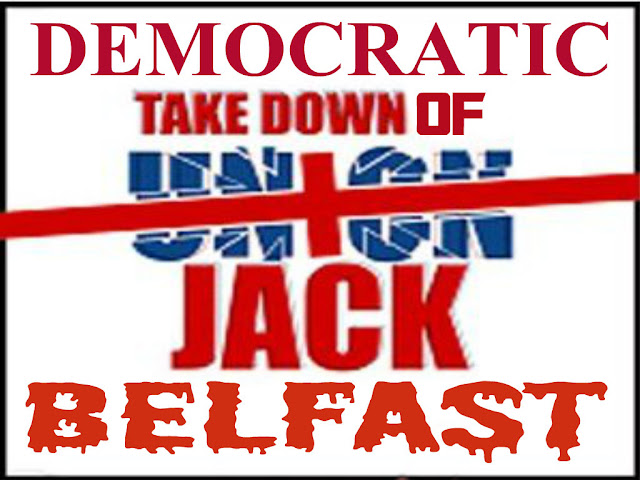 The cost of policing the continuing union flag protests has soared to over #15 million (?17.5 million
Crowd of 100 loyalists in Newtonabbey last night.
The trouble broke out just after 8.30pm, according to a police spokesman. A building containing the constituency office of Justice Minister David Forde was targeted  by the rioters and a number of windows were smashed. A car was also set alight in the violence.
An office belonging to another Alliance Party politician, Stewart Dickson in Carrickfergus, was destroyed by arsonists in December. The party’s only MP, Naomi Long, and a number of local councillors have also received death threats.
Last week, Mr Ford said unionist parties 'drove' the flag protests. Mr Ford the Alliance party's annual conference that the DUP and the Ulster Unionist Party had cynically targeted his party and in particular the Alliance MP for East Belfast Naomi Long for crude electoral purposes.
“It seems to suit unionism better to have people worried about flags and identity, protesting at the City Hall, than have them focus on the fact that their children are leaving school without the essential skills they need to make it in today’s world, and lobbying about that at Stormont,” he added.
It emerged last month that the cost of policing the continuing union flag protests has cost more than £15 million (€17.5 million). PSNI chief constable Matt Baggott outlined the financial implications of the disturbances during a briefing to members of his oversight body, the Policing Board.
Comments (2) a)This thuggery occurs not just in the context of the initial opportunism of the DUP but is further componded by the more recent disgraceful and irresponsible commments by Peter Robinson in relation to the PSNI and Sammy Wilson in respect of the judiciary. The First Minister and his cohorts clearly still have a long way to go when it comes to respect for democracy.
The silence from the political and media establishment in the 26 counties is deafening. We were first treated to the initial symapathetic noises from the usual quarters towards the flag protests but since the "protestors" haveshown their true colours these commentators have gone silent.
Unionists / unionism should be no more beyond criticism from southern quarters than republicans when it is justified. A more direct and honest approach over the years may have helped to avoid prolonging the conflict.
The unionsit leadership has once again displayed their complete inability to self-analyse and develop. They still practise the philosophy to be "first to offend and first to take offence".

B)Time to remind loyalists who are the majority in Ireland and quieten down this howling dog.

Time to remind loyalists who are the majority in Ireland and quieten down this howling dog. 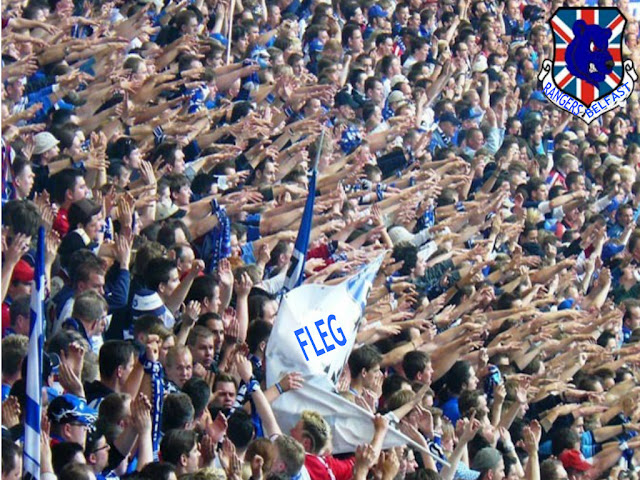 In a small town just outside Belfast, a man has just saved a woman and her daughter from a vicious Doberman attack by wrestling it to the ground and chocking it to death. 3 news reporters run to the scene.
1st reporter. "Please, I need this story, Brave Republican, saves a family from a brutal canine attack"


"Sounds good but I'm not from the Republic" he says.

2nd reporter. "Please let me have it. Amazing Fenian risks all for mother and child."


"I'm not Republican and I sure as hell ain't no Fenian, I'm a loyalist." He said proudly.


Q: What do Rangers Fans use for birth control?
A: Their personalities.
Q: How is a pint of milk different then a hun?
A: If you leave the milk out for a week it develops a culture!
Q: What's the difference between a Hun and a sperm?
A: At least a sperm has one chance in ten million of becoming a human being.
Q: How many Rangers fans does it take to change a light bulb?
A: It doesn't matter, they're all condemned to eternal darkness anyway.
Q: What's the difference between a Hun and a bucket of shit?
A: The bucket...
Q: What do you get when you cross a Hun with a pig?
A: I don't know, there are some things a pig just won't do.
Q: Santa Claus, the tooth fairy, an intelligent Hun and an old drunk are walking down the street together when simultaneously they each spot a fifty pound note. Who gets it?
A: The old drunk, of course, the other three are mythological creatures.
Q: What does Rangers and a three pin plug have in common?
A: They're both absolutely useless in Europe.
Q: What's the difference between a busload of Rangers fans and a Hedgehog?
A: On a hedgehog, the pricks are on the outside.
Q: What is the difference between a Rangers Fan and a trampoline?
A: You take off your shoes to jump on a trampoline!
Q: What do you call a Rangers fan who goes to University?
A: A janitor...
Q: What's the difference between a Hun and a coconut?
A: One's thick and hairy, and the other's a tropical fruit.
Q: What do you call a hun in Europe?
A: A tourist...
Q: What do you say to a Rangers supporter with a good looking Woman on his arm?
A: Nice tattoo!
Q: How can you tell E.T. is a hun?
A: Because he looks like one.
Q: You're trapped in a room with a Lion, Cobra snake and an Rangers Fan. You have a gun with two bullets. What should you do?
A: Shoot the Hun Twice.
Q: How do you make Barry Fergusons eyes light up?
A: Shine a torch in his ears.


Q: What do you call a Hun in a three-bedroomed semi?
A: A burglar.