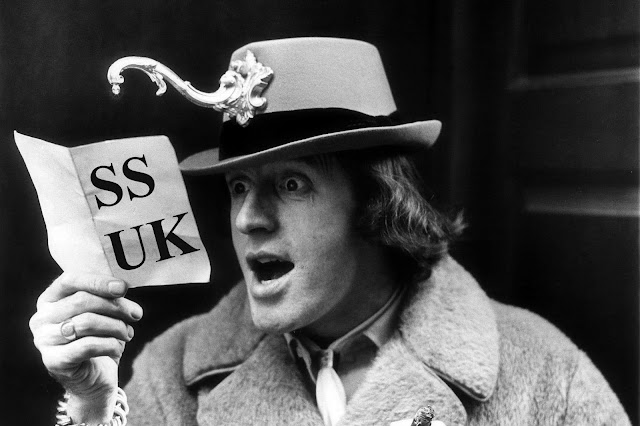 The British Prime minister Mr David Cameron in refusing a public inquiry regarding the British state murder  of lawyer Pat Finucane, citing costs as a reason but when he met the Finucane family at Downing Street in October 2011, he said that there “are people in buildings all around here (meaning 10 Downing Street) who won’t let it happen”. Which begs the question:who is actually running the country?

Lawyer Pat Finucane, like lawyer Rosemary Nelson was a “thorn in the flesh” of the British occupation in Ireland and were left vulnerable to loyalist murder?. MI5’s role was crucial, said BBC investigative reporter John Ware, in a rare piece of BBC honesty. Nuala O’Loan former police ombudsperson claims the new regulatory roles were still not strong enough in 2003.


The British state murders of Irish human rights lawyers and truth tellers such as the journalist Martin O'Hagan, were not isolated examples of British state terrorism in occupied Ireland. Investigation has shown, that this pattern of activity was systemic.The role of MI5 or any of SS UK's activity is not open to a public inquiry? They are beyond accountability. Which again begs the question:who is actually running the UK?

MI5 and SB wanted Lawyer Pat Finucane dead and the UDA was penetrated at its most senior level by three MI5 agents.According to Justice Cory, MI5 was warned three times that Mr Finucane was being targeted for assassination, the last being just seven weeks before he was shot in front of his family. MI5 did not inform Special Branch, though it is clear even had they done so, this Branch of SS UK would have done nothing about this, since they too had already heard from their own informants, that a hit  was imminent and did nothing to stop it, nor did they help another Branch of SS UK the CID, catch the state sponsored killers. Simply put, the police, military intelligence and MI5 wanted these Human rights lawyers dead.

The previous British Government could not agree with the Finucane family on arrangements for  an inquiry, but the Finucane family indicated, that they would support a public inquiry under the Inquiries Act 2005 as a way forward. Reviews thus far have had limited resources, and limited access to the Stevens files which are now under control of the Police Service of Northern Ireland, who are neither forthright or straightforward on the matter. MI5 have used delaying tactics such as requiring Sir Desmond to justify why he wanted to publish certain documents.He was able to question witnesses but had no power to conduct oral hearings and it all was conducted in secret behind closed doors.

The British state murder of Pat Finucane, Rosemary Nelson, Martin O'Hagan are just a tiny pieces of the jigsaw of British war crimes, such as Bloody Sunday in British Occupied Ireland, along with the denial of civil rights, internment, torture, Ballymurphy, numerous other questionable murders and attempted murders. British cover ups and their refusal to allow the Irish any political power for decades, requires putting all these pieces together, which poses one key question. Do the British government now have any legitimacy what so ever in Ireland?

These above criteria are used by the British government, as a basis for their invasions and support for overthrowing regimes in North Africa and the Middle East currently. Measured by the same criteria the British government, has long lost any right to rule in British Occupied Ireland? Mumbled half apologies, without proper amends in the Commons, really does not cut the mustard anymore, particularly when no one ever seems to go to jail. Like their genocide of more than 6 million Irish, there is nothing, not even an apology never mind the considerable amends that the Nazis made for their holocaust dwarfed by the enormity of British war crimes and genocide committed in Ireland.

The British state which pretends to represent all of the people of the UK including British Occupied ireland while at the same time engaged in illegal activity of murder, terrorising the irish people, with a massive cover-up apparatus at the very highest level. They pervert their own so called  justice system and withhold justice from happening, A civilized state is supposed to have standards and a legal bases in law not in state terrorism or war crimes.

A European political observer who is a regular visitor, with intimate knowledge of both Ireland and Britain, made an astute observation on this matter. He said the lack of a public outcry in England about the British state being exposed, to systematically operating outside the rule of law, with regard to matters of state terrorism, cover ups and perverting the course of of justice is simply savage and that the British state murder of  the Irish,  not being traditionally a big issue for the English public, will eventually come home to roost some day and negatively affect themselves?

With Britain's MI5 murderers completely in charge of administering British Occupied Ireland, she said it does not require a great leap of the imagination from the Pat Finucane case, to other notable cases such as MI5's internment of the Price Sisters (or the Princess Diana case, for example?) to become a focus for more people connecting the dots. MI5 are the prime suspect culprits for stealing the Royal Prerogrative with regard to internment of Marian Price and perverting the course of justice by shredding the Royal document, prior to her kidnap and political internment, shrouded in secrecy.

MI5 and SS UK while being a puppet of the British state, used for many years, to terrorize the whole nationalist community,.in collusion with their state sponsored terrorists, is what they are principally about in Ireland. This is what the UK government is engaged in, using its proxies in a campaign of British state terrorism against the native Irish. The United Kingdom uses its secret services such as MI5, MI6 and Army Intelligence in an extra judicial capacity but it is also becoming clear, that in so doing over an extended period of time, large elements have gone rogue to the extent that more often than not its a case of the tail now wagging the bulldog, in a secret service culture, not only of impunity but complete impunity which cannot now be disappeared overnight. The UK are not only ones now becoming victims of their own rogue elements, as the article below demonstrates.

February 05, 2013 "Information Clearing House" - The Washington Post reports an interesting exchange that is said to have happened between the President in his first term, and Chuck Hagel, the nominee to be the next Secretary of Defense.

Bob Woodward writes in the Post that on a visit to the White House in 2009, Hagel warned Obama that he should look out for rogue elements within the Pentagon that were leading a ‘new world order’:

According to an account that Hagel later gave, and is reported here for the first time, he told Obama: “We are at a time where there is a new world order.

The Post states that Hagel warned Obama about becoming “bogged down” in the ongoing war in Afghanistan, saying it would define Obama’s first term. Hagel reportedly later privately questioned the wisdom of sending additional troops to join the conflict.

At the time, Obama had announced a proposed deployment of over 50,000 troops to Afghanistan, based on recommendations from the Pentagon.

In response, Hagel is said to have noted “The president has not had commander-in-chief control of the Pentagon since Bush senior was president.”

“If Hagel is confirmed, as appears likely, he and the president will have a large task in navigating this new world order.” The Post report concludes.

The assertion here seems less centered around the concept of ‘new world order’ and more towards the simple notion that the military industrial complex is driving perpetual war for its own ends; not really a major revelation in itself, and more an obvious statement.

However, there is no reason to believe that Obama, as president, would not already be aware of any form of ‘new world order’, be it rogue elements within the Pentagon or a vast elite shadow government structure, if Chuck Hagel, as a Senator, was aware of it.

This all begs the question, if Hagel knows the position of Secretary of Defense carries little meaningful influence over the military top brass, then will he attempt to do anything about it, or will he simply play along with the role?"
Posted by Unknown at 8:57 AM