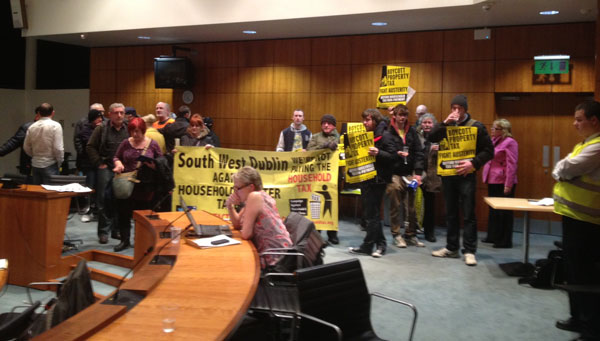 Campaigners against the property tax – who staged one of a number of peaceful protests at Councils today – have questioned why Gardai at South Dublin County Council used brutal and unnecessary force against them, including some plain clothes Gardai. Cannisters of pepper spray were also waved at locals who were manhandled and handcuffed. One is currently being kept in Tallaght Hospital for observation of his injuries.
Aaron Nolan (aged 19, now in hospital):
“I was standing in front of Shane Donnelly when one of the uniformed police pulled me to the ground. I stood up and tried to get in front of Shane again. A stocky man, with a light blue hoody, who I thought was one of the protesters, grabbed me and pushed me against the wall. He then grabbed my head with his two hands and smashed my head against the wall. I fell on the ground and when I was on the ground, he choked me with his two hands. I was dazed and unable to stand as he handcuffed me.”

Eddie Ericsson, Tallaght :
“Why does it seem like the police were prepared for a confrontation? Are tactics like this what is to be expected to intimidate normal working class people into accepting austerity?”

Pat Waine, Greenhills:
“The heat of working class anger was felt by Labour party councillors when anti-property tax protesters took the fight to the South Dublin Council Chamber. Ordinary householders peacefully protested at the Council meeting causing it to be abandoned.The police wielding pepper spray used heavy handed tactics to remove protesters. Householders were thrown to the ground and handcuffed in the council chamber in an appalling attempt by the police to bully protesters into submission. Our resistance to these unjust taxes will continue and intensify.”

Phil Foster, Tallaght:
“We were holding a peaceful protest in the council chamber when two Gardai arrived, followed by plain clothes and uniformed Gardai. They grabbed Paul Murphy (MEP) and Pat Waine and threw them to the floor. One Garda put his knee into Paul’s back and neck. He grabbed his hand and made a fist shape of it and pushed it into the floor to put immense pressure on Paul’s fingers and knuckles. Paul shouted out in pain. The other Garda had Pat’s hands handcuffed behind his back and was kneeing him in the back and ribs. I’ve never seen anything like it before, neither had any of the other people there.”

There were several occupations of councils this evening. Fingal, South Dublin and Kilkenny.

A peaceful occupation of Fingal Council building in Swords, Dublin was held by activists of the Campaign Against Property Tax and Austerity (CAPTA). facebook.com/CAPTADublinWest

Kilkenny Borough Council occupation
At last the councillors feel the anger of people facing the property tax, the water tax and other austerity measures
By: Campaign Against the Household & Water Tax Carlow/Kilkenny 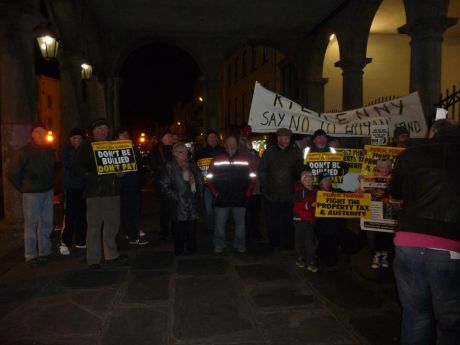 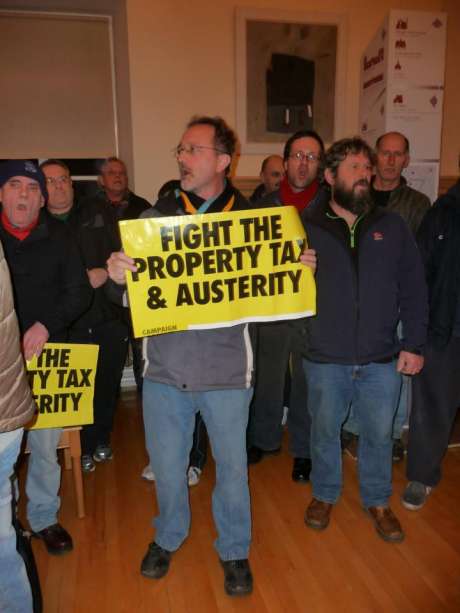 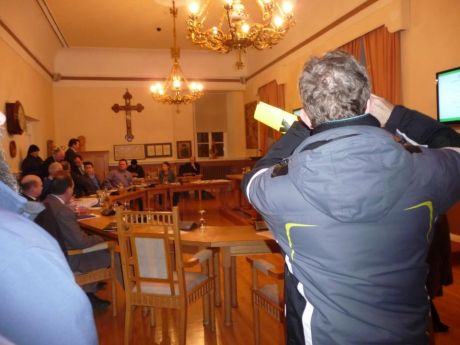 Council meetings disrupted by protests in Dublin and Galway

Scuffles broke out between gardai and anti-household charge protesters who disrupted a meeting of South Dublin County Council this afternoon. Photograph: Tim O'Brien

KITTY HOLLAND and TIM O'BRIEN
Socialist MEP Paul Murphy was among six people arrested tonight as members of the Campaign Against the Household and Water Taxes (CAHWT) disrupted council meetings in Dublin, Galway and Kilkenny.
Mr Murphy was among five people arrested in Tallaght as about 30 members of the campaign occupied the chamber of South Dublin County Council. The council meeting had to be suspended while gardaí were called.
A protester Mick Murphy, who is a former member of the council, announced the interruption was orchestrated by the same group which last week invaded Cork City Hall.
In an exchange with the mayor Cathal King of Sinn Féin, who gave the protesters the option of joining the public gallery, Mr Murphy said the protesters would allow no work to be completed.
To chants of “Labour Party get off our backs, we wont pay your property tax” and “axe the tax or watch your vote collapse” Mr Murphy warned council meetings across the country were facing disruption from the protesters in coming weeks.
Councillors then left the room as protesters marched in a circle around their seats. Mr Murphy proposed a motion to his fellow protesters that they not leave the chamber “until we decide to”.
The chamber was then cleared by gardaí who told the protesters: “It is not open for discussion”.
The protest continued outside the chamber and four arrests were made, a Garda spokesman said.
In Swords in north Dublin over 20 campaigners staged a sit-down protest in the foyer of the Fingal County Council building, forcing an adjournment of the council meeting in the adjoining chamber.
Gardaí were called and protesters were refusing to leave until those arrested in Tallaght were released. They were released without charge shortly before 7 pm.
About 20 protesters staged a sit-down protest in the rotunda of Dublin City Hall for about an hour from 5.30 pm.
Gardaí were called when they hung a large banner from the East Wall branch of the CAHWT over the front of the building. No arrests were made and the protesters left peacefully at about 6.30 pm.
In Galway a planned protest at the City Hall was stopped by gardaí and one arrest was made under the Public Order Act.
The protests come two weeks after a meeting of Cork City Council had to be abandoned, on January 29th, when its chamber was occupied by anti property-tax protesters.
Socialist Party councillor in Fingal and spokeswoman for the campaign Ruth Coppinger, who had been in the chamber, left to speak to the protesters.
She said there were be further instances of civil disobedience over coming months.
“The campaign has been warning that there would be more effective protests like this. The politicians are refusing to listen, they have refused to come to meetings organised by the campaign so it seems we have to bring our voices to them.”
Another protest was held outside the meeting of Kildare Borough Council, while in Inchicore, about 35 people staged a protest outside the constituency office of Catherine Byrne TD (Fine Gael).
Ms Byrne’s daughter, councillor Clare Byrne, speaking by phone from the office as the protest continued outside, said gardaí were on-hand and there had been no repeat of the occupation of the office by protesters last week.
Her mother had said she would have to close the office following the occupation on February 4th. “Well we talked her out if that as a family,” said Clare Byrne. “She has to have an office here and the constituents need to know it will be here.”
Times Debate
Posted by Unknown at 12:47 PM