NOW THEN ! A BRITISH NECROPHILIA PROCESS 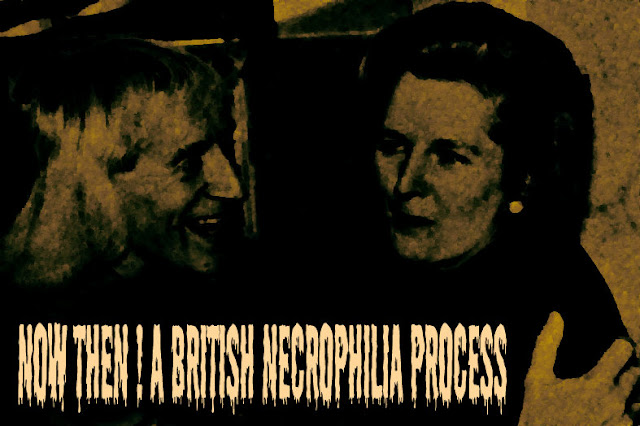 While the British continue to dismantle the Irish Peace Process systematically under the Tories, Britain is also involved in stoking conflict in Syria, after it helped destroy Libya last year, by taking part in an illegal NATO bombing campaign. David Cameron accompanied representatives of British weapons manufacturers to Saudi Arabia and the UAE to win further lucrative defence contracts for British firms.The British Tories were sponsored with millions of pounds in the last election by the Arms industry worldwide and there is simply no money in peace or without their showcase window of British Occupied Ireland in turmoil, on their daily BBC World service advertising their weaponry of genocide while Kitsonian terror gangs stir social strife for crowd control hardware to be put on display to the despots of the world..

Britain’s Green Party MP Caroline Lucas said, that Cameron should draw the line at “dirty money”. Lucas went further said, that Britain has a shameful track record of exporting arms and equipment to regimes in countries such as Saudi Arabia, Bahrain and Libya and said Britain can’t claim to be on the side of peace and democracy, while the British government continues to bolster authoritarian regimes with weapons’ sales, spending taxpayers’ money promoting further deals worldwide.

Spokespeople from the British government are telling the media tens of thousands of British jobs, depend on the defence industry and that huge arms deals are ‘good for the country’,  while defence companies are privately owned, with every worker employed in the UK by BAE System, subsidized to the tune of around 13,000 pounds. The arms sector’s contribution to the British economy is minimal, but the industry constitutes a very powerful and effective lobby, with links of a revolving door between government and subsequent jobs with self-serving arms manufacturers.

A report from BASIC, the Oxford Research Group and Saferworld, on updated government figures, it was calculated, that the arms industry received about 852 million pounds a year in subsidies. Much of this money going to BAE, a company with a track record of bribery, espionage and arms deals with the most oppressive regimes in the world. Not much time then in such a culture for a Peace Process in British occupied ireland to survive. The Tories in Government are dismantling it piece by piece with broken promises, shredding documents of Her Majesty and the political internment without trial of human rights activists such as Marian Price and the secret internment by remand of scores political prisoners including those released under the terms of the Peace Process.


David Cameron does an aexceptionslly good job for the arms dealers of death while double jobbing as the British Prime Minister while also paid by taxpayers. In 2011, he was in Egypt mouthing platitudes about democracy and lecturing the world on human rights as the Mubarak regime fell. Britain's Human Rights track record during their Occupation in Ireland is far worse than Mubarak. Then he moved on with his arms dealers in tow to Bahrain and Saudi Arabia, bastions of democracy and human rights, who were lavished with praise and gifts while invited by the Cameron government to attend a London arms fair. The same day that Cameron was in Libya celebrating another hollow victory for British imperialism, his arms dealing cronies in London were rewarded for his militaristic policies and salesmanship at the fair, titled Defence and Security Equipment International Exhibition.

Cameron was in Libya wallowing in the limelight on the political platform of ‘protecting’ Libyans from Gaddafi with the sheer hypocrisy of huge oil contracts and more arms to kill more Libyans. He is currently also directly arming Al Queda in Syria whom the American refuse truck. Tens of thousands died in Libya, countless others were maimed and much of the country’s physical and social infrastructure ruined as a result of British-French military rockets and bombs. There will be hundreds of thousands murdered in Syrian war crimes with British weaponry while the vast majority of Britons want nothing to do with the civil war stirred by the Imperialists.

More than a thousand arms manufacturers displayed their wares of death in London.with the Economist Intelligence Unit stating, 14 of those countries were authoritarian regimes. Five countries, according to the British government itself, were countries with “the most serious human rights concerns.” The British Government itself being the chief human rights abuser in the world under a cloak of hypocritical deceit which partly funded the event, under the cover of its arms promotions organisation, while lecturing about repression and human rights abuses elsewhere, while Cameron had no qualms about selling to fellow state terrorists in Algeria, Israel, Bahrain, Libya, Iraq, Saudi, Pakistan and the UAE.

While Cameron and British Foreign Secretary William Hague stand in front of TV cameras with speeches, lecturing about humanitarianism and the precious nature of human life, they sanction not alone these arms deals but the murder of human rights lawyers and journalists in British Occupied Ireland who would inform the world of Britain's war crimes in Ireland. Despite the economic downturn worldwide markets such as West Asia, Africa and India keep the pot boiling and re one of the few remaining British industries thriving. With politicians stuffed in back pocket and tensions being stoked in various locations across the globe, regional arms races keep the arms trade in profit.

Meanwhile in Britain, people are continually fed the lie that eye-catching arms deals to fellow terrorist regimes like the British, are good for “the country.” In a time of biting austerity, headline-hogging arms deals fuel conflict, to the detriment of many, for the benefit of the few. Meanwhile the British are continually feeding the lie of other eye-catching arms of civilian control, by British paramilitary police of loyalist rioting in Belfast to the world, along with a pseudo-revolutionary war with their fake terrorist narrative. British State terrorism is the key component to the ongoing conflict in British Occupied Ireland of secret political internment, in a  post peace process era..