British Occupied Ireland with the treatment of political internees such as Marian Price, Martin Corey and many others, has become a human-rights-free zone.The quarantine of many Irish political prisoners is a familiar concealment. When placed in a human rights context, British Occupied Ireland is often described in terms of the British government‘s denial of human rights to political prisoners but equally important the denial of their Irish humanity and identity.British Occupied Ireland has been a laboratory for their dehumanization, while they use their media, such as the BBC world service, to refer to prisoners of conscience, as terrorists, to ostracize them from what it means to be human and allow the British the physical and mental treatment of Irish political prisoners, abhorrent to human beings.Thus they accomplish through cultural erasure, through the creation of the terrorist narrative; legal erasure and physical erasure through torture.While the dimensions of dehumanization are distinct, they are interrelated. All are connected by law and specifically by human rights.The British have created the preconditions for state power activity, so brutal, as to deprive Irish political prisoners of the ability to be human or have any human rights.They stand exposed to the violence of the British state, unmediated, unprotected by any human rights, reducing political internees to a state of bare life without humanity. What is evolving is the Irish have no right, to have rights, a vacuum enabling extreme British state violence, placing the internment of Marian Price, at the center of a struggle not just for rights, but for humanity that includes you and me.

On the 18th January 1978, the Government of the Republic of Ireland brought an application against Britain, before the Commission of International Human Rights in Strasbourg (ii) that various interrogation practices--in particular the so-called 'five techniques', which included wall- standing, hooding and deprivation of sleep and food--and other practices to which suspects were subjected amounted to torture and inhuman or degrading treatment contrary to Article 3...The Commission unanimously found that the five techniques did constitute a practice of torture and that other practices amounted to inhuman and degrading treatment.

On the same day the Parker report was published on 2 March 1972, the United Kingdom Prime Minister stated in Parliament, that its torture techniques in British Occupied Ireland would not be used ever again in future. The Prime Minister's statement, directives expressly prohibiting the use of the techniques, whether singly or in combination, which were then issued to their forces by the Government.

At a hearing before British Courts on 8 February 1977, the British Attorney-General declared that the 'five techniques' would not in any circumstances be reintroduced either collectively or individually. Yet still the torture goes on worldwide with Marian Price and others secretly interned without trial in British Occupied Ireland, while hundreds more claims are in the pipeline as Iraqis become aware that they are able to bring proceedings against the UK in the London courts. 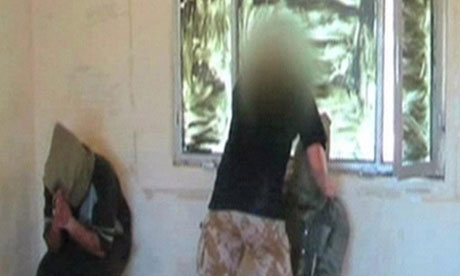 A still from video of a British soldier screaming abuse at hooded Iraqi detainees played to the public inquiry into the death of of Baha Mousa. Photograph: PA
Britain will face fresh charges of breaching international law over the alleged torture and killing of prisoners during the war in Iraq, which began almost exactly 10 years ago. The allegations will be unveiled in the high court, when Britain will stand accused of a "systemic" policy of abuse committed over five years, from 2003 to 2008.
At a hearing scheduled over three days from 29 January, lawyers for 180 Iraqis who claim they are victims of abuse, or that their family members were unlawfully killed, will place a file of statements before two judges presiding over the court in London accusing British soldiers and intelligence officers of unlawful interrogation practices. These include hooding and the use of "stress positions", sexual abuse, beating and religious abuse of illegally detained prisoners. In some cases, the testimonies allege, the torture led to the death of the prisoner.
The statements were compiled during meetings with victims and relatives, mostly in Lebanon, by human rights lawyer Phil Shiner of the Public Interest Lawyers group, based in Birmingham.
The court will rule on whether the abuses were isolated incidents of which commanders, senior ministry officials and politicians were unaware, as the government insists, or "systemic" and authorised as policy. The MoD contends that any general problems of detention and interrogation were dealt with by an inquiry into the death of Baha Mousa, an innocent hotel worker killed while in British custody in Basra in 2003, and continuing internal investigations by its own Iraq Historic Allegations Team.
But the author of a book on the killing of Baha Mousa, Andrew Williams – a law professor at the University of Warwick – says: "What happened to Baha Mousa, and how the army and the government responded to his death is emblematic of a whole system in operation … a callous culture that … permeated far up the command chain, both military and government".
Shiner says of his evidence that the Baha Mousa inquiry "may have shone a torch into a dark corner" but what is before the court next week is more like "a stadium in which we will switch on the floodlights.
"We've got the training materials", he says, "we've got the policy documents. Violence was endemic to the state practices and part of the state practices".
His counsel team, led by Michael Fordham QC, will present five so-called "state practices" they claim were "unlawful, right to the top", including illegal interrogation techniques taught at the army intelligence facility at Chicksands, north of London, unlawful detention and unlawful use of lethal force
Shiner's files are deeply shocking. Insults to Islam and sexual depravity feature frequently in the statements: a soldier is alleged to have masturbated over a prisoner, another to have committed sodomy with his finger; female interrogators are claimed to have stripped and feigned seduction in exchange for "information".
Most of the alleged incidents took place while prisoners were in custody, though some occurred during "strike operations" on people's homes, with suspects and their families allegedly subjected to abuse and crude violence. Prisoners who died in custody were invariably said to have done so due to "natural causes", despite beatings and kickings.
The hearing comes just weeks away from the 10th anniversary of the Iraq invasion, and will be counted as a measure of how far Britain can reckon with its own legacy in Iraq. South African archbishop emeritus Desmond Tutu last year urged in this newspaper that the then prime minister Tony Blair and others should be prosecuted by the international criminal court over the legality and conduct of the invasion.
"This is the crucial moment of decision", says Williams. "This is our last chance to get to the truth of what happened. This is what we demand of others, but we do not demand it of ourselves. What kind of message does that give the world about who we are?"
• This article was amended on 20 January 2013 to correct errors in the editing and production process that attributed quotes from Phil Shiner to Prof Andrew Williams
Posted by Unknown at 8:55 AM