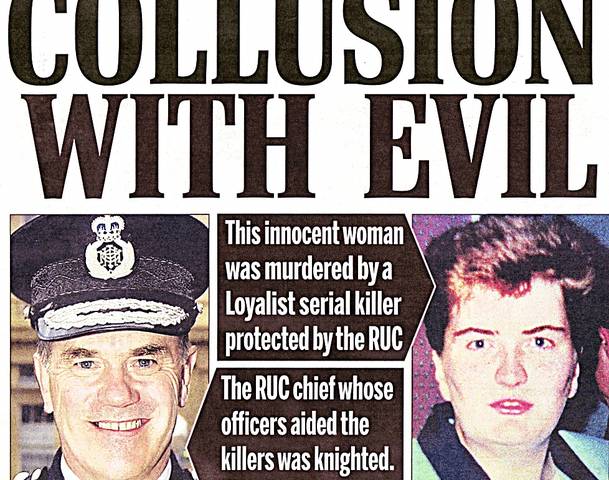 We will not remain silent as the British government kidnaps, tortures, sodomises, illegally imprisons and kills innocent people including our human right's lawyers. We will act to publish and expose crimes committed in our name. These actions are hateful and revolting to all who claim to be civilized. Let us live life with dignity and demand it for all. "I will permit no man to narrow and degrade my soul by making me hate him." - Booker T. Washington

“I believe that my role as a lawyer in defending the rights of my clients is vital. The test of a new society in Northern Ireland will be to the extent to which it can recognise and respect that role, and enable me to discharge it with without improper interference. I look forward to that day,” - Rosemary Nelson, human rights lawyer, just before she was murdered by British secret service agents of MI5 who currently control policing in all of Ireland.

During an Official inquiry that still rambles on, years later, while the British state in Occupied Ireland has failed to investigate properly death threats and the murder of Human rights Lawyer Rosemary Nelson, Nuala O'Loan, British Occupied Ireland's first police ombudsman, asked for intelligence files relating to it.. She has "absolutely no doubt" she never saw those MI5 intelligence files.There are many similarities between Ms Nelson’s British state murder and that of Belfast lawyer Pat Finucane. Both were high profile successful human rights lawyers in British Occupied Ireland and both received death threats from the British police through clients. In both cases human rights campaigners, independent media, other lawyers and families of other British state victims are adamant their murder investigations and inquiries are not independent, honest or fair.

After the murder of Pat Finucane another lawyer in Occupied Ireland, Ms Nelson was seriously worried about her own safety and complained to the British Police about death threats made against her by British Police, intelligence agents of Britain's secret services. She also told a UN inquiry about the death threats and about mistreatment by British Police the previous year before they murdered her.

Peter Cory, a retired independent Canadian Supreme court judge, reported there was prima facie evidence of British state collusion in the murder of the Irish Human rights lawyer. He also asked in his inquiry for the MI intelligence files, but was not given "documents pertaining to the request for a warrant or the intelligence file on Rosemary Nelson".

Rosemary Nelson was one of up to a hundred human rights Lawyers in British Occupied Ireland who are still constantly harassed by British police according to Rory Phillips, counsel of the current constantly delayed inquiry.Rosemary Nelson, lodged formal complaints to the Independent Police Complaints Commission, the UN, the US and the media before her murder by agents of Britain's notorious secret services MI5 and their death squads with legal immunity in Ireland.

The Independent Police Complaints Commission warned British Secretary of State of the time Mo Mowlam that British Police's own inquiry into its officers death threats against Rosemary Nelson was unsatisfactory. British Special branch drafted a warrant to install a bugging device in Rosemary Nelson's home before her murder. The British intelligence services were warned internally about the warrant, of a political backlash, if it ever became public that British Intelligence was spying on Rosemary Nelson, while at the same time issuing death threats to her, while its agents were planning her murder.

British Occupied Ireland's secretary of the time, Mo Mowlam's approval of this spying on lawyer-client confidentiality, insulted any integrity around the peace process while Martin McGuinness a leader meant to protect nationalist interests, also worked with the other arm of British Secret Service death squads in Ireland, MI6.

The Chief British Constable Flanagan of British policing in Occupied Ireland during the crisis, described the human rights lawyer Rosemary Nelson, as an "immoral woman", Flanagan denied its existence until he was confronted by the warrant. His denials proved that "either he didn't know what special branch was doing, or he is lying," said Martin O'Brien a director of British Occupied Ireland's leading human rights organisation. Working with the British Police in Occupied Ireland has been described at the inquiry as "wading through treacle while treading on eggshells".

In the ample evidence about the British agent suspects on camera, transmitting messages of her car parked outside her reidence, with MI5 agents sighted before and after her murder but their was no follow up by British Polce, after they murdered her. This case is just one aspect of the always present British form of the code of Omerta in British Occupied Ireland post peace
process.Sustainable genuine peace is not possible in Ireland, without justice. It's historical experience has proven this over and over again. The smokescreen of British pompous, royal titled, establishment inquiries serve only, once again to hide the foundation of injustice upon which the British mentored sectarian occupied state is processed. 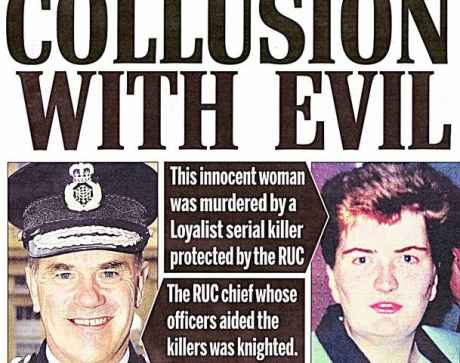