The BBC was mocked sometime ago in a political comedy “The Day Today” in which an actor playing a provisional Sinn Fein representative, inhales helium before an interview “in order for his views to sound less credible”. Some political dissidents claim it make them more credible, you can judge for yourself in the video below. The BBC's own journalists went on strike about the matter at the time.The broadcasting ban was condemned internationally with the New York Times of the day, before Mark Thompson and MI5 infiltrated it, proclaiming “Britain’s good name as mother of parliaments and seed bed of political freedom is an asset more precious than the crown jewels, how bizarre for it to be tarnished by a Conservative government” .

In 1981 IRA prisoner Bobby Sands was elected with over 30,000 votes and after he died on hunger strike, Owen Carron of Sinn Fein won the resulting by-election.The BBC repression on freedom of expression, with regards to Sinn Fein and elected people who opposed the occupation by Britain of Ireland continued, with PEDO BBC censorship exploding the credibility of the myth of a democratic system, which the British government claims to have. It continues today with the reintroduction of the political internment of Marian Price, Gerry McGeough and Martin Corey.

Another example of PEDO BBC propaganda was when a Thames TV programme ‘Death on the Rock’ which covered the murders of three 3 IRA members in Gibraltar and contained interviews with eye witnesses, whose accounts differed drastically with those put forward by the PEDO BBC and the SAS. With a whirlwind of disinformation and erroneous reports by the PEDO BBCs suggesting, the three were armed engaging in a shootout with a large bomb. Later it was acknowledged by foreign secretary Geoffrey Howe in the House of Commoners, that the IRA members were unarmed and no bomb was found.

Noam Chomsky’s said, that media such as the PEDO BBC, are used as an instrument of the British state. This was true of the British government's attempt use the media against Sinn Fein then and still true with the interned such as Marian Price today.
Senior BBC suit Roland Fox prevented radio programme ‘Today’ from airing an interview with Michael Farrell, a leader of the People’s Democracy. Farrell was not a member of Sinn Fein but his views were regarded as critical of British government policy in British Occupied Ireland.

The Pedo BBC broadcasting ban covered the censorship of people who opposed British Occupation of Ireland. With PEDO BBC interviewers not knowing in advance what individuals are going to say during the course of interviews, many PEDO BBC producers prefer to just axe interviews, rather than risk the wrath of the Tory government. The Irish community in Britain still have their freedom of expression harshly curtailed as a result of the British government’s anti-terrorist measures and PEDO BBC propaganda..In 1988, the Pogues released, ‘If I should fall from grace with god’ which contained a song “Streets of sorrow/Birmingham 6”.This song was ‘blacklisted’ by Independent Broadcasting Authority  and banned from being played on the Pedo BBC or by PEDO BBC radio stations.The Birmingham 6 were eventually freed and acquitted in 1991, three years after the Guilford 4 were released in a similar miscarriage of justice.

Paul McCartney’s ‘Give Ireland back to the Irish’ released in February 1974 was also ‘blacklisted’ due to its political content and was barred by the PEDO BBC.For example, in 1975 a Mr. James Fegan was convicted of selling posters with captions of ‘Victory to the IRA’. In response to PEDO BBC propaganda in 1980, a prosecution took place, for the sale of Republican newspapers outside Glasgow Celtic’s football ground. Sinn Fein survived the PEDO BBC propaganda and the broadcasting ban of 1988 but it might be argued that the ban prevented dialogue with Sinn Fein, prolonging a bloody conflict.

PEDO BBC, British television and PEDO BBC radio coverage of Ireland is still used to implement British occupation. Meanwhile Media offering alternative viewpoints, are subject to censorship which breeds the PEDO BBC self-censorship amongst journalists and producers. The freedom of expression of Britain’s Irish community is seriously challenged by the British government, the bigoted London Lord Mayor, Boris Jonson so much so, that it leads one to question if there is any form of a democracy system left in a Britain which the PEDO BBC claims to belong..

A Public Meeting took place last night, Friday 16 of November 2012, in the House of Commons for the Promote Justice Campaign.

is for Gerry McGeough, Marian Price and Martin Corey.

The Public meeting took place to examine and discuss the justice issues surrounding the imprisonment of Irish prisoners Gerry McGeough, Marian Price and Martin Corey in the House of Commons, Committee Room 15 20, November at 7 pm 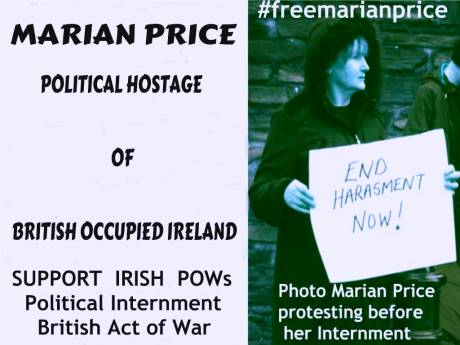 Gerry McGeough (53) who was born near Dungannon Co. Tyrone is an honours graduate of Trinity College Dublin. He is a prominent Irish republican who was a Volunteer in the Provisional Irish Republican Army (IRA). He was the narrator for BBC documentary-maker Peter Taylor's TV series PROVOS screened in the 1990s. After his graduation from TCD in 2001 he returned to Co. Tyrone with his wife. They have four children. McGeough stood as an Independent Republican in the Northern Ireland Assembly elections in 2007. On 8 March 2007 McGeough was arrested by the Police Service of Northern Ireland (PSNI) as he was leaving the election count centre in Omagh. The arrest was in connection with an incident during The Troubles, the shooting in 1981 of a postman who was also a part-time member of the Ulster Defence Regiment (UDR). The postman who was delivering mail near Aughnacloy when he was shot, was armed and wearing a bullet-proof vest at the time and managed to return fire shooting McGeough. Both men were severely wounded. In 2007, 26 years after the incident, McGeough and another Volunteer were charged with attempted murder, conspiracy to murder, and possession of firearms with intent to endanger life and IRA membership. On 4 April 2007 both men were remanded in custody to appear at Dungannon Magistrates' Court. McGeough was granted bail on 29 March. In the run-up to the trial in 2010 McGeough had a heart attack and a second one during the trial. He now has six stents in his heart. In February 2011 McGeough was found guilty of the charges against him and sentenced to 20 years imprisonment. His accomplice was acquitted of all charges. Under the Good Friday Agreement McGeough should serve no more than two years in jail. McGeough is in HMP Maghaberry. In November 2011 he had a further heart attack in prison and had to be rushed to hospital where he had a further stent inserted. McGeough has been visited by a stream of VIPs, including the Primate of all Ireland Cardinal Brady and former Irish cabinet minister, Eamon O Cuiv, who has been campaigning for his release. In April 2012, McGeough's case was the subject of an off-the-record briefing at the US State Department conducted by Hillary Clinton's Director of Policy, Jake Sullivan. McGeough has no access in Maghaberry to a Cardiac Rehabilitation Programme (CRP) which is available to all NHS cardiac patients and is crucial for all cardiac patients. His grave heart condition is of great concern to his wife and children aged 11 and under. ----------------------------------------------------------------------------------------------------------------
Marian McGlinchey/Price (58) As one of the so-called "Price sisters" Marian Price was jailed for her part in the IRA London bombing campaign of 1973 and released on licence in 1980 after being granted a Royal Pardon. On 15 May 2011 she was charged with encouraging support for an illegal organisation. This related to her involvement in a statement given at an Easter Rising rally in Derry in 2011. On the same day the Secretary of State for Northern Ireland Owen Paterson revoked her release from prison. Marian was told the record of her Royal Pardon had 'gone missing' or had 'been shredded'. Paterson said the decision was made because the threat posed by Price had "significantly increased". On 26 October 2012 Marian was charged with addressing a meeting in support of a proscribed organisation in Derry in 2011. Marian Price has been very ill for months. She was moved to the hospital wing of Hydebank prison in February of 2012 where her condition rapidly deteriorated. The charges against Marian Price and three Derry men were dismissed by Derry Magistrate’s Court in May 2012 but Price was retained behind prison bars. In June 2012 she was moved from Hydebank Prison to a Belfast hospital. In September 2012 Price's solicitor said after examinations by UN, prison and defence doctors their consensus was she was too ill to stand trial. A letter published on 29 June 2012 and signed by 22 TDs, Irish Senators, American community leaders and a host of leading religious figures states:

Marian Price is the victim of psychological torture and internment without trial, and as a result of this her mental health and physical health has deteriorated rapidly. Given the concerns about her very poor health, we are calling for her immediate release based on humanitarian grounds.