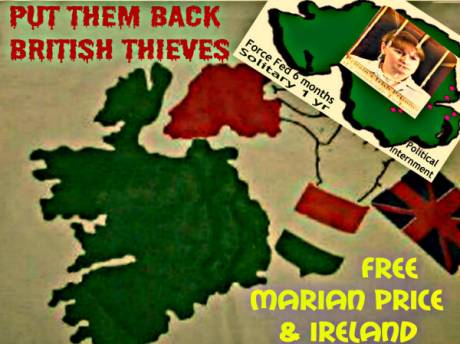 "The Minister for Foreign Affairs Eamon Gilmore said he would accept a report from an Oireachtas group planning to visit jailed republican Marian Price in two weeks.

Ms Price was detained in May 2011, after the licence on which she had been released in 1980 for IRA bombings in London was revoked.

Mr Gilmore said he had raised the case with former secretary of state for Northern Ireland Owen Paterson on several occasions and, more recently, with the current holder of the office, Theresa Villiers.

“The Taoiseach also took the opportunity to raise the matter with secretary of state Villiers when he met her on October 2nd,” Mr Gilmore added.

“I will continue to raise this case with the British government and to convey my concerns, which are shared by all sides of this House, to them and to relevant Northern Ireland authorities.”

Mr Gilmore was replying to ULA TD Clare Daly, who said the treatment of Ms Price had been deemed to be tantamount to torture by the UN.

“Her medical treatment is not the best and does not adhere to various standards,” she added.

Ms. Daly said she was “an extremely ill woman who represents no danger to the public whatsoever and the longer she is incarcerated in solitary confinement and denied the support she needs, the worse her condition will get”.

Ms Daly suggested that Mr Gilmore join a number of TDs who are planning to visit Ms Price in two weeks.

Mr Gilmore said he was aware a parliamentary group intended to visit her and he would be happy to hear a report when it returned."
Related Link: http://irishblog-brianclarkenuj.blogspot.com/
SONG FOR MARIAN PRICE