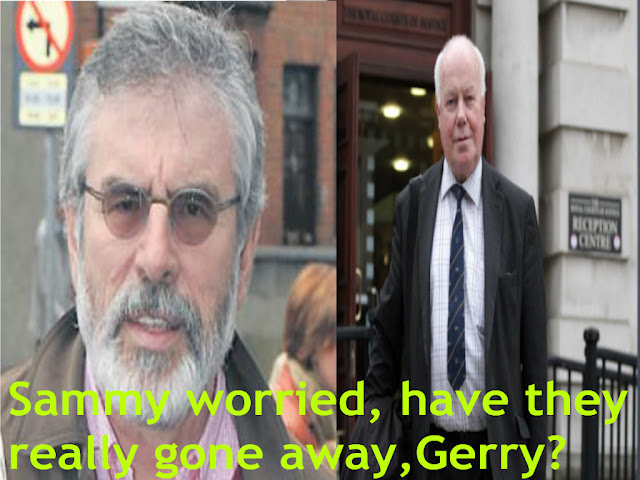 Published on Monday 15 October 2012 08:44
A DUP politician who survived an IRA assassination attempt has told how he fears for his health over the distress caused by his council colleagues urging his attempted killer’s release.
Sammy Brush has been left reeling after fellow members of his council chamber passed a motion in support of freeing republican Gerry McGeough.
Last week Dungannon and South Tyrone Borough Council called for the release of McGeough, who was jailed in February last year for the 1981 attempted murder bid on Mr Brush.
Last night Mr Brush, 70, told the News Letter: “It has really affected me this week. I have been with the doctor and had to double my medication for blood pressure because it went up sky high. I am a diabetic and my blood sugar went out of control as well.
“So I can tell you it has seriously annoyed me.
“Now I have been through the whole shooting and then the court case – and then to find out my council colleagues support the man who shot me. It is almost unbelievable.
“Most people I have spoken to can’t believe there is such a callous attitude by councillors against one of their colleagues.
“My wife is annoyed about it too. This motion was put forward only to cause stress and strain and division – and humiliation to me.
“I am still recovering from it a week on.”
Dungannon Council is made up of eight Sinn Fein councillors, six DUP councillors, four UUP councillors, three SDLP councillors and one Independent councillor.
The motion split the council along nationalist and unionist lines – with Sinn Fein mayor Phelim Gildernew using his casting vote to see it passed.
Mr Brush said he also plans to take legal advice this week.
The DUP veteran said: “I am seeing a barrister this week to see where to go next. I have been humiliated and hurt on top of everything else that has happened to me.
“I think the council has a duty of care to me as they do to one of their employees.”
McGeough was found guilty of shooting the then postman and part-time UDR member as he delivered a letter to a farmhouse outside Aughnacloy, Co Tyrone.
He only survived because he was wearing a bullet-proof vest under his uniform.
McGeough was sentenced to 20 years but is likely to serve only two under the terms of the Good Friday Agreement.
There were scenes of uproar in the council chamber when the Sinn Fein motion, which also called for the release of Marian Price and Martin Corey, was brought last Monday.
Mr Brush said he became aware of the motion about a week before the meeting.
He said that “it should have never come before the council”.
“It had nothing to do with council business,” he said. “Of the three people named, none had any connection to the borough apart from the man who attempted to murder me.
“I have been a councillor since 1981 – actually I went on to the council about a week before I was shot. I did stand down in 1993 and rejoined the council in 2005.”
Mr Brush now wonders whether he “will be able to deal with these people again”.
“There was a committee meeting on Thursday morning that I felt I couldn’t attend,” he said.
“A number of the people who voted were there. I would have been sitting directly across the table from them. I couldn’t stomach that. How I will deal with the rest of it I don’t know.
“I mean, how do you cooperate with and support people who support someone who tried to take my life?”