Tánaiste Eamon Gilmore said today, that parties of the centre left in Europe needed to prove that they had “credible answers” for the economic crisis.

Addressing a conference of European social democrat politicians on "Progressive Governance", the Leader of Labour in the right wing Coalition Government, said the European mood has shifted towards the centre left, “But we have to build now, on that success.”

Earlier on the awarding of the Nobel Peace Prize to the EU, he said it was a "great fillip" to Ireland's forthcoming presidency of the European Council next year, saying;

“I very warmly welcome the decision to award the Nobel Peace Prize to the European Union,” told reporters in Dublin shortly after the announcement this morning.

“The European Union has been the most successful peace process in our lifetime, and indeed in our living memory.," he said.

"When you think of the fact that Europe, in the first half of the 20th century, tore itself apart, slaughtered its young in two great wars and that the protagonists in those wars came together, worked to develop the EU. The wars of the 20th century that occurred in Europe would be unthinkable now.

“We so often think of the EU in economic terms and political terms. But it is a decision which causes us to stand back and look at the fact that the EU has made such a huge contribution to the maintenance of peace in Europe, to the promotion of peace on our continent and to supporting the efforts that are needed to bed down peace.” 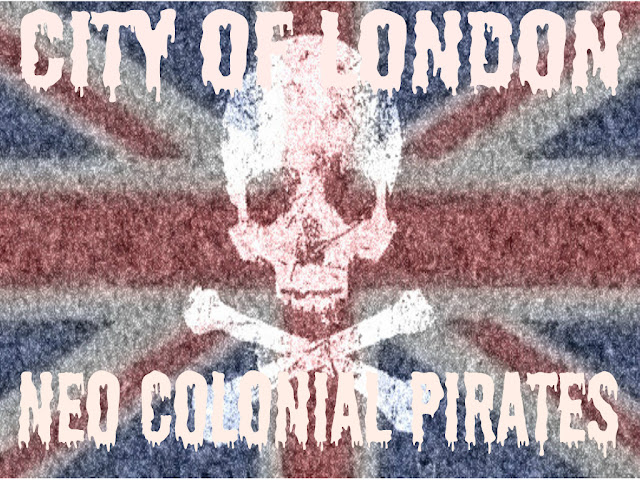 October 11, 2012 "Information Clearing House" -  Whenever financial swindlers prosper at the expense of investors or a bank jiggers interest rates to bugger their competitors or tax evaders flee fiscal crises or rent gouging petrol monarchies recycle profits or oligarchs pillage economies and drive millions to drink, drugs and destitution they find a suitable secure sanctuary in London.

They are wooed and pursued by big British realtors eager to sell them multi-million dollar estates, trophy properties and landmark mansions. Pompous and pretentious British academics convince them to send their progeny to six digit private schools, promising them that when they graduate they will be speaking English through their nasal cavities, rolling their r’s and mastering the art of eloquent but vacuous elocution. British governments, Labor Liberal and Conservative, in the best and most hypocritical legal traditions, fashion the legal loopholes to attract the biggest and wealthiest parasites of the world.

Crime Wave Sweeps City of London
A veritable crime wave[1] has invaded the City of London, where millionaire investment bankers cook the books for billionaire clients and bilk the Treasury to pay their fines and flout the Law. Courses in business ethics are obligatory at Oxford and Cambridge since it has become standard operating procedure for mega-swindlers to plead guilty ,to pay a fine and avoid jail and to solemnly promise to never, ever, flout the law….. until the next mega-deal.


London has become the center of global financial capital by engaging in long term large scale active collaboration with multi-billion pound drug, arms, people smuggling and sex-slave cartels. The “Brits” specialize in laundering funds from the Mexican, Colombian, Peruvian, Russian, Polish, Czech, Nigerian narco-kings. Albanian white slavers have their ‘private bankers’ at prestigious City banks with a preference for graduates of the London School of Economics. Bi-lingual Greek kleptocrats, lifelong billion dollar tax evaders, fleeing from their pillaged homeland have their favorite real estate brokers, who never engage in any sort of naughty ‘due diligence’ which might uncover improper tax returns. The City Boys with verve and positive initiative, aided and abetted by the hyper-kinetic “Tony” Blair’s open door policy to swindlers and saints of all colors and creeds, welcomed each and every Russian gangster-oligarch-democrat, especially those who paid cash for multi-pound ‘Olde English’ landmark estates’.

The London Sanctuary for the world’s richest plunderers and parasites offers unprecedented services, especially protection from extradition and criminal prosecution at the site of their crimes. Impartial British legal and judicial officials are experts in citing constitutional precedents that, in strict regard for the established legal order, uphold the denial of extradition, denying the legal and justice systems of every pillaged country and the cries of justice of the impoverished Irish, Russians, Greeks and Spaniards.
Real and feigned indignation among the highly moralistic City Boys and cynical grins among the experienced senior partners, greet the unruly victims of their guest billionaires. The impoverished masses demand that the British creditor banks should collect their debt payments from the accounts of the swindlers who received the loans, passed their debt to the public treasury and recycled their ill-gotten gains into their British accounts.

When the Saville dressed, swashbuckling swindlers cross swords with their counterparts, as when the venerable and respectable, Barclays Bank fixed the Libor to profit on the interest rate differentials, at the expense of other banks, the bankers all agreed the solution was to pay a 290 million pound fine, admit the crime and try to save a system which should “only” bilk the public treasury, retail investors and ‘market takers’. Barclay’s “crime” was, of course, poisoning the trough from which their peers and partners prosper.
The Barclay Boys of both sexes, outraged by the indecent finger pointing by the other City Boys, raised an issue which nobody could deny: they were not alone. HSBC, Standard Charter, the Royal Bank of Scotland, Lloyds of London and many other bankers of equal or lesser assets across the Atlantic were engaged in similar unethical, (daresay criminal) or at least questionable undertakings. They also paid fines and were duly chastised. The older and more experienced senior officers of the City sent internal memos to their brash PR underlings to stop this unseemly washing of soiled silk shirts in public; mutual denunciations created the false image that there was a crime wave running through the suites of the City of London.

Unfortunately, the British legal system is not merely protective of overseas billionaire swindlers, it is also accommodative, supremely vindictive and bending over frontward when it comes to requests for extradition from its “Special Partner” in Washington. Let it be an Islamic religious figure or an Australian whistleblower (Assange) and, in due haste, with the extradition papers in hand, “the bobbies” are ready to break embassy doors to facilitate compliance.

London: Pimping for Parasites:
The global economic crisis is a boon for London’s high end real estate corporations, as overseas millionaires and billionaires, tax evaders, political raiders of the public treasury, abandon pillaged economies and pour billions into mansions and penthouses. Super-rich rentier monarchists from the despotic Gulf States join Russian commodity speculators, and new rich Chinese sweatshop owners in bidding up London properties in prestigious postal codes in Belgravia (Ebury Street, Eton Place, and Eton Square) Knightbridge, Mayfair (Park Street). Corpulent Russian oligarchs and pious Saudi royalty loll in country estates in, Hertfordshire, Herefordshire and Cheshire overlooking their elegant English gardens and enjoy the purring and caresses of their very upscale British courtesans, in one or another of the two dozen bedrooms. The British government’s tolerance and open minded attitude to Russian and Albanian gangster oligarchs, whose bloody ascent to wealth can match any Sicilian godfathers, greases the wheels for the rise of what the Financial Times chooses to call, the real estate ‘industry’, bankrolled by the financial ‘community’ and aligned with the insurance ‘investors’.

The predators international, take their afternoon tea at 4 p.m., sherry at 6:30 p.m. They are entertained by the gossip of Her Majesty’s Court and the Queen’s Anniversary Celebration and indulge in the sporting life (soccer teams over polo horses). They cultivate a taste for culture. Accompanied by Oxbridge experts they shop for “collectibles” – paintings at Ordovas on Saville Row, Richard Nagy on Old Bond Street, Frank Auerbach at the Malborough, sculpture in Jean & Luc Baroni at St. James and jewelry shops for a Vacheron Constatin.

The Gulf oil oligarchs, who gouge exorbitant rents from energy poor African and Asian countries and Chinese and Indian billionaires who exploit hundreds of millions of Asian female factory workers and deny migrant workers residence, rest and health insurance, spent $9 billion pounds ($14.4 billion dollars) on central London houses in 2010-2011[2]. Between 2011 and mid-2012, 60 percent of the buyers in the prime central London market were foreign millionaires and billionaires[3].

The Cameron-Clegg regime demands sacrifice, austerity and belt tightening in Greece, condemning millions to destitution, suicide and desolation, even as it encourages the top 1% of Greek kleptocrats to “invest” and reside in central London’s exclusive neighborhoods. According to the IMF 56,000 Greek plutocrats are tax evaders[4]. According to a US study of their annual income, $28 billion Euros ($36 billion USD) is unreported[5]. Most of which is deposited in London banks or ‘invested’ in luxury property in Mayfair, Belgravia or thereabouts. If the illegal accounts were taxed or better still used to pay for the foreign debt, it would conform to Greek law, reduce the deficit and social cuts and perhaps revive the economy. But respecting Greek tax laws would mean fewer commissions for the real estate moguls at Savells, Marsh and Parsons, Knight Frank; less private accounts for HSBC and Barclay’s; less sales at the upscale art galleries; fewer patrons for the high end ‘escort’ agencies of both sexes.

Crime pays. FIRE[6] plays. Public hospitals close. Tuition rises. Private clinics and schools catering to the overseas oligarchs and their British partners flourish. Where’s “the crises”? Not to be found in central London, nor in the City; nor in the legal system; nor in the Special Forces. Bank swindlers flourish. Judicial litigation among oligarchs pays. Dirty mercenary wars in Afghanistan, Libya, Syria and elsewhere provide lucrative contracts for retired Colonel Blimps– in the best traditions of empire.

The crises? That’s for the other England outside of the City, with the wrong postal codes. Where workers crowd emergency rooms, where the poor await evictions in what were once council houses and where those who study and work can look forward to debt and dead end jobs.

God bless God damn London, the Parasites Paradise!
James Petras, a former Professor of Sociology at Binghamton University, New York, owns a 50-year membership in the class struggle, is an adviser to the landless and jobless in Brazil and Argentina, and is co-author of Globalization Unmasked