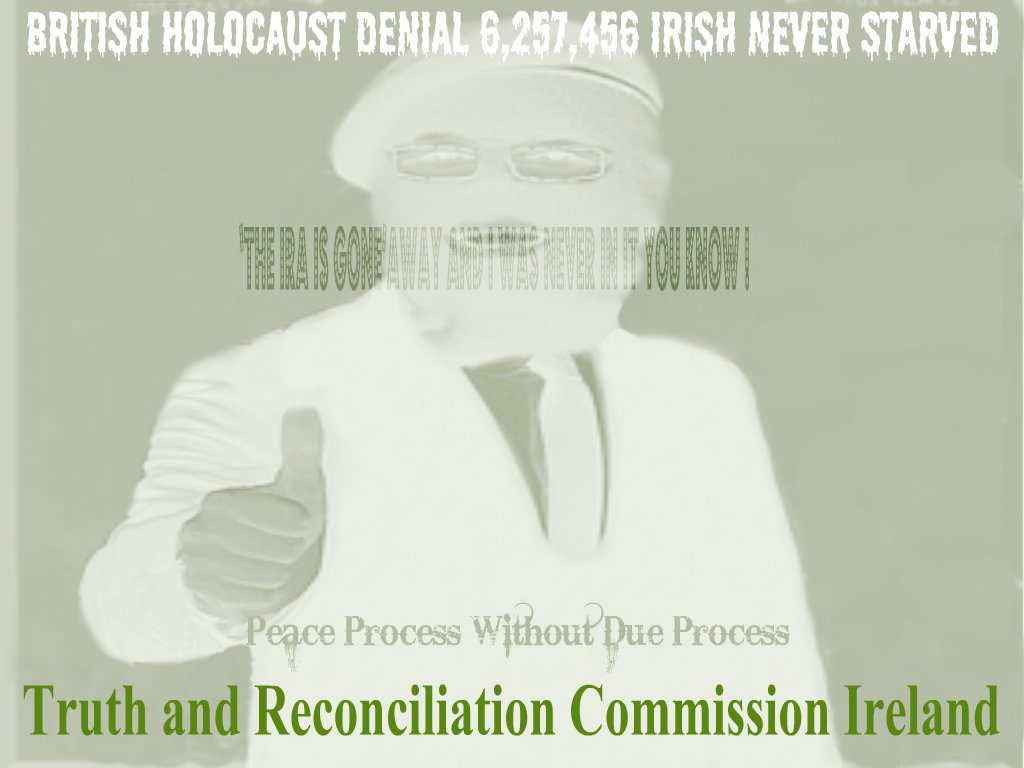 The British are using internment without trial again in British Occupied Ireland, under their new Stormont regime, while following the orders of British Viceroyal Villiers, who in reality is the head of their sectarian statelet. The British calculate that Provisional Sinn Fein are so cosy in British offices, with the Queen's shilling, within the Stormont regime, that they will not oppose the crown like the SDLP did, when they walked out of Stormont, last time internment was introduced. The British with a compliant meek Provisional Sinn Fein, whom they have apparently too much dirt on, will sit still in luxury on the Internment issue, so that they can then use these new procedures,  to systematically intern large numbers of Irish minded commoners of Her Majesty Viceroyal Villiers scum statelet.

If republicans were united together, internment would be defeated in the morning. Remember the H-Blocks where genuine Irish republicans, branded all nationalist politicians inside the British regime, as accomplices and part of the British regime’s repression? Do they not remember the slogans on the Hunger strike marches when Gerry Fitt is a Brit. Will they have to follow coffins (presuming they go to the funerals to get re-elected} of women and men now interned without trial again and call out another Gerry Brit? Can we get the grassroots out for support and force the now middle-class Provisional Sinn Fein, to remember their working class roots, to remember the principle and courage of their former comrades, breaking Internment without trial last time? It was the blood spilled on Irish streets and the lives given by previous internees that put them where they are today, which clearly many of them have forgotten.

The lessons of Internment injustice, the breeding ground of political violence, are the 40 odd most recent years in Ireland.How far do we have to take this, to awaken them from their luxury induced coma and personal power trips.They are meant to be guardians of the people power vested in them, not usurpers for personal use, gain and wealth.The British are banking on some more Irish bloodletting to justify their programmes of further guineapig internment, bloated so called security budgets, while they use Occupied Ireland as a stage once again to showcase their latest state of the art crowd control experiments on TV, while they market the bloody toys of Britain's industrial-war-complex, to their compliant neo-colonial, commonwealth collaborators.

We must unite behind ethical principled socialist republican leadership or will we be condemned to see many more Irish republicans interned without trial, along with their working class comrades on the other side of the Irish Sea. Provisional Sinn Fein has little time left to decide whether they lead, follow or get out of the way, they have sat on the fence far too long and allowed a certain Ford, a portfolio to abdicate their responsibilities. Anyone of them who saw the inside of a British prison, cannot yet have forgotten their spiritual call to a Peace with JUSTICE ! INTERNMENT is INJUSTICE ! Which side are you on ?

Aisling Gallagher argues that we must stand up against the human rights abuses committed against Marian Price by the British state.


Since her re-internment in May 2011 as a result of “secret evidence” that neither she nor her lawyers have been allowed access to, Marian Price’s health has steadily worsened. In June 2012 this resulted in her being moved from Maghaberry prison to a hospital in Belfast as a result of ongoing health issues. Price’s case has drawn worldwide condemnation, with calls for her release coming from across the globe. Predictably, and as has always been the case with the mistreatment of Irish Republican prisoners, the British press remains largely silent around the issue.
Marian Price came to the fore of the Republican movement in the 1970s as one of the well-known “Price Sisters”. Along with her sister, Dolours, she was part of a team of bombers; Price was arrested and imprisoned for two life terms for her part in the 1973 bombings of London, in which one person died and over 200 were injured. While in prison, she joined a hunger strike in 1975, demanding to serve her sentence in the Six Counties. The hunger strike lasted for over 200 days, during which time the prisoners were force-fed for 167 days, in a practice that is widely recognised as inhumane. Speaking in an interview afterwards, Price said of her ordeal:

“Four male prison officers tie you into the chair so tightly with sheets you can’t struggle. You clench your teeth to try to keep your mouth closed but they push a metal spring device around your jaw to prise it open. They force a wooden clamp with a hole in the middle into your mouth. Then, they insert a big rubber tube down that. They hold your head back. You can’t move. They throw whatever they like into the food mixer – orange juice, soup, or cartons of cream if they want to beef up the calories. They take jugs of this gruel from the food mixer and pour it into a funnel attached to the tube. The force-feeding takes 15 minutes but it feels like forever. You’re in control of nothing. You’re terrified the food will go down the wrong way and you won’t be able to let them know because you can’t speak or move. You’re frightened you’ll choke to death.”

It is clear from this statement, given more than thirty years ago, that Marian Price had already suffered enough. She was born and raised in a Belfast where she and her community were third class citizens; where prejudice meant her family and neighbours were never likely to attain a steady job with a decent wage; where gerrymandering strove to stop them gaining political representation; where they lived under the constant threat of Loyalist violence, and then after 1969, under unremitting cruelty at the hands of the British Army. Driven to violent struggle by the repressive British regime, Price spent what were ostensibly the best years of her life in British jails. Once freed, she maintained her commitment to the Republican cause, calling the Good Friday agreement “something I never went to jail for”.
And so, in 2011, when Marian Price was re-interned on trumped up accusations in Maghaberry Prison, some people surely – if naively – thought that it would be a matter of weeks before she was freed again; that a British judiciary system that could provide no evidence as to the reason for her detainment would have learned from their intransigence around Bloody Sunday, collusion and shoot-to-kill, from their mistakes in Iraq and Afghanistan, from their errors in over thirty years of occupation in the Six Counties, and over 800 years of oppression of Ireland as a whole, from their arrogance in so much of their far-reaching and recent history; many must have thought that the public outcry would be enough that this woman, who had already experienced torture at the hands of the British state, would not have to suffer anymore.
Anyone who believed that has been, predictably, proved wrong. Britain, for all her false claims to proud small nationhood, still harks after the glory days of her Empire; never has this been clearer than in the last insufferable 18 months. She still desires the position she once held as sovereign of three-quarters of the world – this is evident in the Unionist desperation to cling to the clearly-defunct United Kingdom but it is also obvious in the treatment of Marian Price. She is a symbol of her community, a community that the British ruling elite spent years trying and failing to silence into submission. Marian Price would not be silent, and for her lack of compliance, she must pay the price owed to the British state.
Marian Price has suffered enough. We may not have agreed with her tactics, but we must defend her human rights. Britain has never been a bastion of human rights and fairness; however, the intransigence of the British state is nothing new.
In this last year, the Left in Britain has been excellent at highlighting the human rights abuses carried out on Palestinian prisoners by the Israeli authorities. We should link this to the struggle of political prisoners in Ireland as well as Bradley Manning, Mumia Abu-Jamal and all political prisoners fighting against imperialism. It is the duty of the Left to fight oppression in all its forms. Marian Price is now in hospital, being treated for severe depression as a result of her internment. Her oppression is one that we should have been louder in standing against.
Like Marian Price, we must not be silent anymore; we must refuse to be silent. Marian Price has suffered enough; it’s time we put a stop to it.