The Price of Justice for an IrishNigger

The Price of Justice for an IrishNigger

"The accumulation of all powers, legislative, executive, and judiciary, in the same hands ... is the definition of tyranny."

The power of the Executive to cast a man into prison without formulating any charge known to the law, and particularly to deny him the judgment of his peers, is in the highest degree odious and is the foundation of all totalitarian government whether Nazi or Communist.

Winston Churchill as, In The Highest Degree Odious : Detention Without Trial in Wartime Britain by A. W. B. Simpson 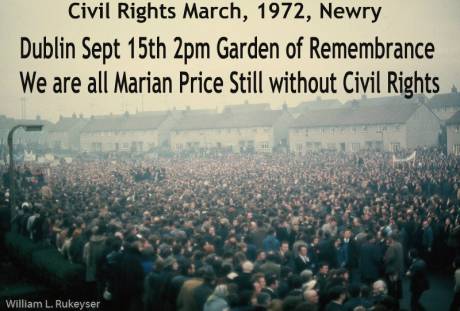 Dublin Sept 15th at 2pm, Garden of Remembrance Free Marian Price
Forty years ago Marian Price marched for civil rights, with her friend Moira Drumm in British Occupied Ireland after being inspired by the Black Civil Rights movement lead by Martin Luther King in the US. Over 40 year later on a windy day, she reached up and held a script, to prevent it being blown away, while a masked man read the traditional IRA’s “Easter Message.” She was arrested on May 13th 2011 and charged with encouraging support of an illegal organisation. Marian appeared three days later in court in Derry, where she was granted bail but as she left the courthouse, she was re-arrested, as per order of a document, signed by the Vice royal Owen Paterson and taken to high-security, solitary confinement in the all male Maghaberry jail. The court case was meaningless, because Paterson’s contempt for justice and due process was trumped by his order to override the bail decision of the Judiciary.

Now, as a result of sensory deprivation torture, she is seriously ill and has been transferred to a Belfast hospital, like her former friend Moira Drumm whom the British shot dead in a Belfast hospital many years ago. Marian is under armed guard with locked bolted doors, barred windows and under 24 hour surveillance. She is gravely ill with pneumonia, while probably being held until she dies in one way or another. Paterson’s order for Marian to effectively die in a British prison, was based on “intelligence” information from his secret services, who have a vested interest in the internment of traditional Irish republicans and political dissidents.

In July, Marian was then charged with “providing property for the purposes of terrorism” allegedly having bought a mobile phone which the British maintained was subsequently used in the killing of two British soldiers at Massereene barracks, back in early 2009. Marian was held then, for two days, questioned about this specific allegation, before being released without charge. No evidence was found in the interim or proffered to the court on this matter. The Judge looking at precisely the same lack of evidence, again granted Marian bail. But yet again as she left the court, another unelected vice royal Paterson order, took precedence over the judge and the court.The Massereene charge was meant to discredit her and associate her with the shootings to undermine a public campaign for her release which attracted considerable support, from people not politically aligned, who could not fathom what crime she had actually been committed, at the traditional Easter Commemoration. Since then the British have orchestrated several personal whispering campaigns, against Marian and her supporters.

A year after her original arrest, the charges relating to the commemoration were thrown out of a Derry court by the judge, who was told, preliminary papers were still not ready. Judge McElholm declared every citizen was entitled to a fair trial, in a reasonable period and that the British had clearly not met this criteria. But again Marian was imprisoned by an order from Paterson. This was the third time a court ordered her released and the third time the unelected English Vice royal in British Occupied Ireland, overruled the court and said no. Further to overruling the judiciary, he also overruled his own Queen. Marian Price was previously given a full royal pardon by the Queen of England or the royal Prerogative of Mercy.Cardinal O'Fiach the head of the Catholic Church bore witness to the fact. Vice royal Paterson again claimed that this document, which would set Marian free, had been lost or shredded by his colleagues. This is a rather serious matter, because perverting the course of justice, is a very serious matter carrying a life in prison for ordinary mortals.

Patrick Ramsey, a Social Democratic Labour member of the elected British Assembly recently wrote to Paterson about this "lost" pardon and formally asked;

-- Where would Mrs. Price-McGlinchey's pardon have been held?

-- How many staff are currently seeking the document and in what departments?

-- Are those looking for it doing so on a full-time basis, if not, why not?

-- Has the Northern Ireland Office received comment from the judiciary on the apparent loss of the document?

-- How many Royal Prerogative's have been lost (or destroyed) that the government has record of?

-- Who is ultimately responsible for the care and maintenance of the building where these documents are kept?

-- What communication [has Paterson] personally had with this person/Department?

-- Can [Paterson] confirm the Department is still seeking the document and will do so until it is found?

Again the unelected English Vice royal Paterson in Ireland contemptuously dismissed the elected Irish Assembly member Ramsey's inquiry, stating that "unfortunately the Royal Prerogative of Mercy was not recovered but had no bearing on current circumstances. Patterson has now even gone further and is now demanding, the local elected Assembly be downsized and it's 'peace process' structures be dismantled.

The UN Special Rapporteur on Torture, Juan Mendez and two leading criminologists, Dr. Phil Scraton of Queen’s University and Dr. Linda Moore of the University of Ulster, have visited Marian with all three calling for her release both on the grounds of her civil rights, basic due process and for humanitarian health reasons before she dies. Both academics and authors of several official reports on prisons in Occupied Ireland, stated: “Given the concerns expressed locally and internationally regarding her continued detention and declining health, we urge you to release her on humanitarian grounds. Marian Price has been imprisoned…without trial in circumstances which may amount to administrative internment and which we believe to be in breach of the European Convention on Human Rights.”

Vice royal Paterson the horsey blood sport enthusiast, married into British royalty, sniffed his stiff Tory upper lip and overruled their recommendation once again. Internment without trail, like all things experimented with in British Occupied Ireland, in the last 40 years of British war on the Irish people, is now being introduced in England itself. While Patterson was overruling his British judiciary and Queen, his Tory party colleagues are introducing a Bill to give it's Ministers power, to use secret service gestapo evidence in secrecy, under “Closed Material Procedures.” Such evidence would not be produced in court, for “national security” reasons, preventing even the accused, the right of defence or the right to know what charge exactly is being made against them..

When Marian was 19, she was one of nine members of the Provisional IRA, who planted four bombs in London, which included the Old Bailey almost 40 years ago in March 1973. Despite a two hour warning, a man died from a heart attack. The IRA team, included Gerry Kelly now a Minister at the Stormont parliament and she was also under orders of several current leading Irish politicians, involved in the peace process, a peace process undermining justification for huge secret service, British taxpayers budgets in Ireland. Marian Price was freed more than 30 years ago in 1980, suffering from tuberculosis, anorexia and weighing just five stone. She and her sister Dolours spent 200 days on hunger strike, demanding political status. They were force-fed three times a day for 167 of the 200 days, with a tube forced down their the throats into their stomach, which almost murdered Marian several times. The resulting trauma and psychological damage of ongoing torture then and now, led to a 1980 royal pardon because of imminent death.

Marian has insisted from the moment arrested in May last year, that she was released in 1980 on a Royal Prerogative of Mercy, which Paterson does not have the authority to override. Paterson claims its terms, which he has not seen, authorizes him to override his queen. Marian's lawyers have repeatedly asked that the pardon be produced, so the terms can be checked by a judge. One does not have to be particularly bright, cynical or subjective, listening to the contradictions in Patterson's waffle subsequently, to conclude who precisely should be spending the rest of their life in prison for perverting the course of justice in British Occupied Ireland. The cause of peace in Ireland is not served by the denial of justice. The only cause served by keeping Marian Price and other political prisoners of conscience interned without a proper trial Maghaberry, is the cause and coffers of the bloated secret service British taxpayers budgets. There is a call for those who genuinely want peace in Ireland, to work for justice and protest in Dublin on Sept 15th at 2pm, from the Garden of Remembrance.

The author would like to thank Eamonn McCann for his researched material used in this article.
Related Link: http://irishblog-irelandblog.blogspot.com/
Posted by Unknown at 1:41 PM