Irish Peace Process Without Due Process is an English Oxymoron

Irish Peace Process Without Due Process is an English Oxymoron

It is becoming more transparent, with each passing day, that the British Tory Government is working relentlessly to dismantle the Irish peace process and escape responsibility for decades of war crimes in Ireland including murder, corruption and human rights violations.Reports submitted by the Committee on the Administration of Justice, Relatives for Justice, British-Irish Rights Watch recently submitted to Congressmen Chris Smith and Senator Ben Cardin, Co-Chairs of the Committee on Security and Cooperation in Europe read like a Nazi war crime file. 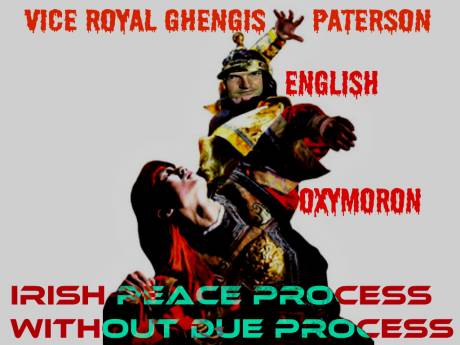 Irish Peace Process Vice Royal English Oxymoron
In their bullying arrogance and rank hypocrisy, the UK criticizes China for its persecution and record on human rights, while they threaten invasion of an Embassy and torture political prisoners interned without trial in Ireland such as Marian Price, while they have also admitted, colluding in the murder of Irish human rights attorney Patrick Finucane, because he knew too much about their dirty laundry in British Occupied Ireland. While this collusion came as a surprise to Congressman Speaker Boehner in the States and minority Leader Nancy Pelosi, it certainly came as no surprise to the long persecuted Irish.

Many believe their bullying arrogance displayed with their imperial dismissal of the Irish government's request for British Army documents, relating to the act of greatest slaughter of the current conflict, the no-warning car bombing of Dublin & Monaghan, is calculated to break the peace process in Ireland once and for all. Every dog on an Irish street knows, that the cars involved in delivering the bombs, were primed by British Army members and handlers. Their consistent meddling in the affairs of another country, something they always complain about with others, while the world objected to their brutal massacre of the civil rights movement in Derry, their corruption of their own supposed rule of law, their re-introduction of internment without trial, their continued use of torture, despite promises to the contrary after guilty verdicts at the Court of Human Rights in Europe, their rampant media censorship or all things genuinely Irish, their destruction of democracy with ongoing political assassinations.

The ongoing internment without trial of Marian Price exemplifies their efforts to provoke a violent reaction from the Irish and finally end the peace process, in an example of their determination to end the agreement. Marian a 58 year old political activist, should be released from internment without trial in British Occupied Ireland immediately, because rather than being 'on licence' she was given a full royal pardon or the Royal Prerogative of Mercy. Vice Royal Paterson's claims that this document, which would set Marian free, has been lost or shredded.

Patrick Ramsey, a Social Democratic Labour member of the elected British Assembly recently wrote to Paterson about this "lost" pardon and formally asked;

-- Where would Mrs. Price-McGlinchey's pardon have been held?
-- How many staff are currently seeking the document and in what departments?
-- Are those looking for it doing so on a full-time basis, if not, why not?
-- Has the Northern Ireland Office received comment from the judiciary on the apparent loss of the document?
-- How many Royal Prerogative's have been lost (or destroyed) that the government has record of?
-- Who is ultimately responsible for the care and maintenance of the building where these documents are kept?
-- What communication [has Paterson] personally had with this person/Department?
-- Can [Paterson] confirm the Department is still seeking the document and will do so until it is found?

The Unelected English Paterson in Ireland contemptuously dismissed the elected Irish Assembly members Ramsey's inquiry stating that "unfortunately the Royal Prerogative of Mercy was not recovered but has no bearing on current circumstances."

Vice royal Paterson has placed himself above the British Occupied Ireland Assembly, which was supposedly elected to govern British Occupied Ireland, just as he has previously overruled the judiciary. Two judges previously ruled that Marian Price should be released on bail and was no danger to society, both having seen precisely the same intelligence reports as Paterson. Each time Vice Royal Paterson negated the judge's decisions and ordered Marian Price interned without trial in solitary confinement sensory deprivation torture, for which Britain promised to cease, when previously found guilty of the same torture by the European Court of Human Rights in Strasbourg. The bigot Paterson, a sadistic blood sport enthusiast, is vindictively determined to keep Marian Price locked up, to keep his sectarian fox hunting loyalist friends happy and ensure the ongoing sadistic damage to her health, while the behavior of the sectarian prison regime is ongoing and deliberately torturing Marian daily.

There is big money involved and considerable political capital for the new Tory regime. British Occupied Ireland has for several decades now served as both a research laboratory and a conflict theatre, to showcase to prospective buyers and their Commonwealth neo-colonial Governments, the evolved crowd control equipment and Kitsonian tactics, developed over 40 years in their latest phase of British repression in Ireland.The peace process is also undermining the justification of hugely bloated taxpayer securocrat budgets of billions in their secret service gestapo establishment, aptly named Hollywood in British Occupied Ireland the centre that compiles secret service reports like movie scripts of pure fiction, that intern without trial for life, Irish prisoners of political conscience, like Marian price.

This Hollywood home of the faceless secret service gestapo, along with the Industrial war complex spending billions of taxpayers money, are about the only thriving British industry left, while they continue with a vested interest in compiling secret intelligence reports, that are never made public or can be refuted by the interned without trial. How can these scripts be regarded as impartial or part of any sort of impartial fair process?. There is big money in repression, internment without trial and torture for the Tories. There is much power too, in that their campaign coffers get bigger contributions from the arms industry, to promote wars abroad and continue to provoke the Irish to break the peace process nearer home.

Vice royal Paterson, the Shropshire leather businessman who married into royalty and the high society horsey set, knows this very well, from his lucrative career expereince in the Tory party.The gravy train pretence of democracy, has being expanded to include some recent Irish recruits to Stormont too, the boasted sectarian parliament for a sectarian people. In the instances of the British gravy that recruited Lord Muck of Londonderry to Stormont not being sufficient, a spot of blackmail on the enablers of child rape in both DUP and PSF circles doing the trick.

Meanwhile the long suffering impoverished working class nationalist people, the institutionalized, victims of British sponsored sectarianism from which Marian Price comes, still struggle for freedom. The slow moving gravy train has clearly not delivered the promised Bill of Rights or basics of justice, necessary for long term peace in this sectarian scum state, the product of age old imperial divide and conquer tactics, they still sponsor in British Occupied Ireland. The injustice of the internment of Marian Price is a good starting point for anyone remotely concerned with peace and justice in Ireland, both critically interdependent. A Peace Process without Due Process is clearly an english oxymoron.
Related Link: http://irishblog-brianclarkenuj.blogspot.com/
Posted by Unknown at 5:01 PM