FREEDOM IS NOT FREE

Marian Price, an Irish Republican political prisoner is seriously ill in hospital with pneumonia: If the peace process is to offer Republicans a democratic avenue it must be seen to work for all, even its most implacable opponents. 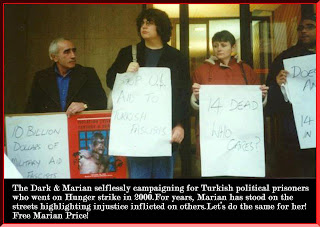 Marian Price is seriously ill in hospital with pneumonia. Her family has expressed “deep concern” about her deteriorating mental and physical health.

In June Price, who is suffering from severe depression after a year in solitary confinement, was moved from Hydebank prison to Belfast City Hospital’s Windsor House unit, which treats patients with psychiatric issues.

But her health has continued to fail. On Tuesday she was diagnosed with pneumonia and moved to the main hospital.
Her husband, Jerry McGlinchey, told the Belfast Telegraph:
“We’re extremely worried. Marian has been in constant pain for months. Nobody has to agree with my wife’s politics to see this is wrong and violates her human rights.”


Arrested after she participated in a republican commemoration ceremony, despite being granted bail, she was returned to prison after her licence was revoked by Secretary of State Owen Paterson and she has been in jail since. The fact Marian was never on licence having received a Queen's pardon when she was released from prison after serving a long sentence for her part in the Old bailey bombing, epitomises the British governments contempt for the rule of law when it involves Irish people. When her lawyers demanded a copy of her pardon, a ministerial gofer claimed the documents relating to Marian release have been lost.

Ever since the UK Coalition government came to power in 2010, it is as if they wish to row back from the Good Friday Agreement. In this case and that of Martin Corey, they have behaved in the most provocative way. If you add in the mistreatment of Republican prisoners in Maghaberry prison who are members of small groups who do not support the Peace Process, one cannot help catching glimpses of the bad old days when British governments believed they could ride roughshod over the democratic and human rights of the nationalist working classes.

One certainty about Irish history is the croppies will not lie down in the face of injustice, if the peace process is to offer Republicans a democratic avenue it must be seen to work for all, even its most implacable opponents.