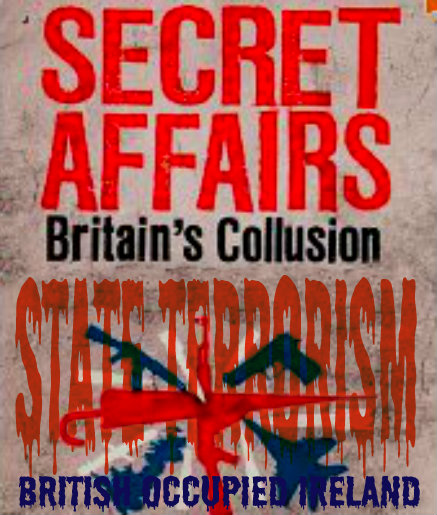 Rosemary Nelson's murderers were a Belfast bomb-maker, veteran mid-Ulster loyalists, including British agents, along with a serving member of the British army. Like another Human rights lawyer murdered by the British Government, special branch, MI5 and the security services, they were spying on her. Security reports on Rosemary's private life were so intense, that in 1998 an application warrant for a bugging device in her lawyers office, went to the British Viceroyal. It seriously concerned Mo Mowlam but under intense pressure from MI5 secret service she sanctioned it. This is the same covert shadowy political pressure being exerted on the Viceroyal, politicians, the media, and the judiciary, that is currently pulling the strings that politically interning Marian Price in British Occupied Ireland. It has a vested interest in unaccountable power and money that answers to neither Queen or country.

Rosemary Nelson was perceived by British MI5 secret services as an enemy, rather than a Human Rights lawyer entitled to protection. She simply knew too much about political covert operations for the long term interests of Britain's MI5, She simply was overly effective in the international arena publicising British war crimes in Ireland internationally, particularly at the the UN. The hidden secret evidence of this, has undermined three previous inquiries, costing millions of British taxpayers pounds, involving collusion in Rosemary  Nelson's murder along with other lawyers and journalists in British Occupied Ireland. They have been  misled by liars in the British Government, particularly MI5,  that no intelligence files existed on Rosemary Nelson. MI5 to this day are in reality unaccountable to anyone, including both the Queen and the Government. They have with impunity, shred and destroyed documents belonging to the Queen with respect to Marian Price's political internment.

During several inquiries into complaints that the British Government and MI5 failed to investigate death threats, Nuala O'Loan, Britain's first police ombudsman in British Occupied Ireland, repeatedly asked for intelligence files on Rosemary Nelson. She had "absolutely no doubt" that the inquiries never saw those files.The non existence of the files, "Was an untruth," says a furious officer close to the murder investigation by Colin Port, now chief constable of Avon and Somerset. Peter Cory a retired Canadian supreme court judge, also concluded there was prima facie evidence of British collusion in the murder of the Human Rights lawyer just like Pat Finucane. He also asked but was given no "documents pertaining to the request for a warrant or the intelligence file on Rosemary Nelson".

Rosemay Nelson was one of scores of lawyers and journalists in British Occupied Ireland who still endure British police harassment for the crime of pursuing the truth with justice. Rosemary Nelson was a particular danger to the British Government and MI5 by setting a precedent by "unusually if not uniquely" lodging formal complaints with the Independent Police Complaints Commission (IPCC), the UN and the US and encouraging her legal clients to do the same, something that hasn't happened yet in the instance of Marian Price

The modus operandi of the British Government and MI5 in liquidating human rights lawyers, journalists, human rights activists, is to first character assassinate them with their agents in the media, particularly in Belfast, by turning their victims into public hate figures, to muffle any subsequent public outcry. This is also true for those whom they intern without proper trials, like Marian Price and Martin Corey. The British Government with MI5 use their agents in the media to doctor photographs, while using their spin doctors, to create an atmosphere of fear, bigotry, sectarianism for political cover, to minimize any political fall out, from their crimes.They also shred sensitive documents, that includes a Royal Prerogative of Mercy, as in the instance of Marian Price recently.

By 1998 the British had made Rosemary Nelson a hate figure, because of her involvement in three particular cases. The attempted entrapment of Colin Duffy; the murder of Robert Hamill, a Catholic kicked to death by loyalists while British police watched idly by doing nothing and her work as legal adviser to the Garvaghy Road Residents' Association, opposing a sectarian Orangemen's annual Drumcree march. On 10 July 1998, the IPCC gave an unprecedented warning to the Viceroyal in British Occupied Ireland, that Britain's own police inquiry into its officers' alleged death threats against Rosemary Nelson were unsatisfactory. The British Chief Constable was furious and then went on the offensive.

Special branch installed a bugging device in her office. In war mongering demagoguery, assistant chief constable, Chris Albiston claimed Rosemary Nelson fabricated IRA alibis, using her lawyer status, to gather evidence about British police officers, while at the same time providing no evidence what so ever for all of this. Britain's secret services were warned of huge risks in regard to a warrant creating a backlash, if it ever became public, that special branch were spying on Rosemary Nelson and her legal clients, while at the same time they were threatening her. The British Government's approval of this breach of lawyer-client confidentiality, compromised it as an honest party in the Irish peace process.

Britain's Chief Constable in British Occupied Ireland, described Rosemary Nelson as an "immoral woman" while denying the role of its secret services confounding all objective observers, "either he didn't know what special branch was doing, or he is lying," commented Martin O'Brien, former director of CAJ, a leading human rights organisation, "and neither of those options is palatable".

In the summer of 1998 "arguably the most important moments in the chronology," the British police claimed their real target was her legal clients but the "focus is entirely on Rosemary Nelson".Much evidence was in camera but inquiries drew attention to security Operation Fagotto at Rosemary Nelson's home, the weekend before her murder. British Government's secret services transmitted messages to her murderers that her car was parked outside. The killers were sighted before and after her death but not followed after her murder. Why? there can be but one conclusion!

There has always been an spooky code of silence about Rosemary Nelson's death. The suspects never spoke but  consistently uttered one line. "It was the government that did it." Rosemary Nelson like Pat Finucane was a prominent Irish human rights lawyer, who was murdered by secret service agents directly under the control of the British Government, which in turn are increasingly under the control of its secret services. Both of these Lawyers simply knew too much and were overly effective in using the correct public platforms should they make that knowledge public at any given time. Rosemary was born on September 4, 1958, in British Occupied Ireland. She was assassinated on March 15, 1999 in Lurgan by the British Government's Occupation.


Rosemary Nelson claimed regularly, that she had received death threats from British police, as a result of her legal work. Like pat Finucane, many of her clients claimed that British police officers had threatened her through them several times. In 1998, the United Nations Special Rapporteur on the Independence of Judges and Lawyers, Param Cumaraswamy, noted these threats in his annual report, and stated in a television interview that he believed her life could be in danger. He made recommendations to the British government concerning threats from police against lawyers, which were not acted upon.

Later in the same year, Rosemary Nelson testified before a committee of the United States Congress investigating human rights in British Occupied Ireland, confirming death threats had been made against her and her three children. She was assassinated by a car bomb outside her home a short time later. Rosemary Nelson was posthumously awarded the Train Foundation's Civil Courage Prize, which recognizes "extraordinary heroes of conscience".

The bigoted, homophobic, sectarian, Kenneth Wiggins Maginnis, Baron Maginnis of Drumglass, has recently used the parliamentary privilege of the House of Lords in London, to prevent his arrest and imprisonment, to state that Rosemary Nelson was and IRA sympathiser and that Human rights lawyer Pat Finucane was an "IRA godfather." Ken Maginnis has also previoulsy equated homosexuality with bestiality, in an interview on the BBC. Maginnis was a member of the sectarian Apprentice Boys of Derry. He was also a member of the disbanded, discredited UDR, a regional branch of the British army, implicated in numerous murders of high profile people in British Occupied Ireland, including Human Rights lawyers Pat Finucane, Rosemary Nelson and numerous others. It was finally disbanded in disgrace in 1992. During the ten years Maginnis was a UDR Major, the numbers murdered in British Occupied Ireland, were the worst of the entire troubles. There is ample evidence of MI5, being a  Systemically State Terrorist Institution of British Occupied Ireland.
Posted by Unknown at 11:59 AM