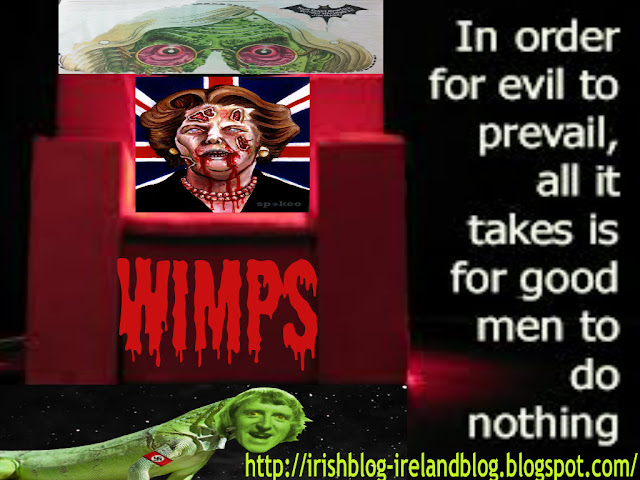 As Christmas looms, Margaret Thatcher is lonely without her intimate friend, the necrophiliac, paedophile Jimmy Savile. The former British Prime Minister and murderer was said to have spent Christmas Day last year, with just her housekeeper and carer , except for a brief visit from her jailbird son Mark, for the role he played in an attempted military coup in Equatorial Guinea, for which he was eventually fined R3,000,000 rand or $500,000 and received a four-year suspended jail sentence. I bet there was some serious hand greasing there!


David Young, her former Trade Secretary and now David Cameron’s adviser is unsuccessfully tying to rotate leading politcal figures and ex-friends such as David Cameron and ahem.. the Queen's family to visit her but without any success. ‘She is lonely,’ Lord Young told a confidant at the Savoy hotel last week. ‘She has good days and bad days. The last time I had lunch with her she knew who was some of the time.Then we sat down for coffee and suddenly it was all different, (out to lunch) ... She goes in and out.’


Apart from her intimate friend the necrophiliac, paedophile Jimmy Savile, Young was always one of Lady Thatcher’s favourites after Jim had fixed it of course, that's when she had the power of the British Government. to do want they traditionally do, murder human rights lawyers in British Occupied Ireland, etc.. She once remarked: ’All my ministers bring me problems; David brings me solutions.’ Some people wonder what exactly her intimate weekends with the Dirty Savile brought her, especially those long Xmases alone together. Just what would a necrophiliac, paedophile and a political murderer do in intimate time at Xmas. Perhaps someone should dig the garden at Chequers but that's not likely with her former Tory friends, now is it?

The truth is Margaret Thatcher likely ordered the Pat Finucane murder, setting in motion the murder of several human rights lawyers in British Occupied Ireland but British can never reveal the truth about the killing of civil rights lawyers, so they will continue this Xmas with the political internment without trial of Irish political prisoners of conscience such as Marian Price who questions their crimes, spending as aresult her second Xmas interned without trial.When good men or wimps do nothing, it Is often left to good women like Marian Price to challenge EVIL, the English word LIVE spelt backwards.