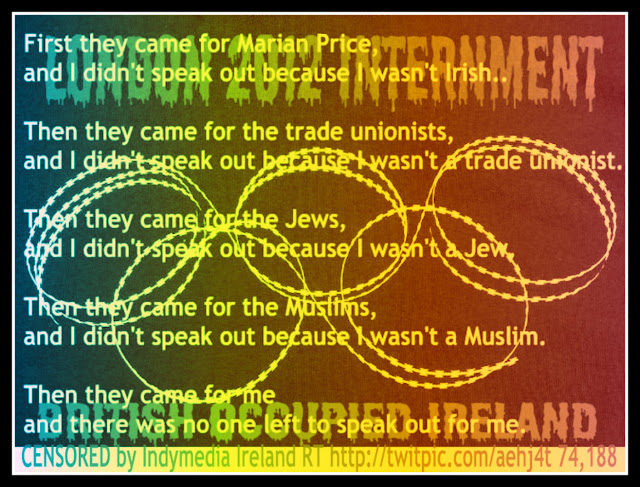 Ex-Anglo-Saxon countries are having major difficulties currently, with democratic accountability and proper functioning Government, that doesn't' make enemies and targets of it's citizens or engage in mindless, lie-driven media carnage in other countries.

CENSORED in Indymedia Ireland
Murdoch who violated her majesty's queendom and the commoners of the UK, is so entrenched in the corridors of British power, as result of his infiltration, along with MI5/MI6, into media/political manipulation decades ago, that they have hardly been touched by the Leveson, Punch and Judy Show. Independent PressTV were ejected from Britain for no reason by the much touted media regulator earlier this year.

This has already happened along time ago, starting with Britain's first colony Ireland and its host of other compliant Commonwealth regimes and bureaucracy left in the wake of the UK empire, including the US. All media in Anglo-Saxon contrived countries of empire, have been infiltrated, including neo-Stalinist/fascist networks portraying themselves as left wing like Indymedia Ireland and a very sticky state sham broadcaster called RTE. John Pilger commenting on the Levenson Inquiry wrote:

“There is a principle which is a bar against all information, which is proof against all argument, and which cannot fail to keep a man in everlasting ignorance. This principle is, contempt prior to examination.”: - Rev. William H. Poole


In Britain, the world of subjugated news and information is concealed behind a façade of a “free” media, which promotes the extremisms of state corruption and war, consumerism and an impoverishment known as “austerity”. Leveson devoted his “inquiry” to the preservation of this system. My favourite laugh-out-loud quote of His Lordship is: “I have seen no basis at any stage for challenging the integrity of the police.”

Those who have long tired of deconstructing the clichés and deceptions of   “news” say: “At least there is the internet now.”

The “hacking” on a vast scale by the state and its intelligence and military arms and “security” corporations. It was unmentionable at the Leveson inquiry, even though the internet was within Leveson’s remit. It is the subject of Cypherpunks: Freedom and the future of the internet by Julian Assange with Jacob Appelbaum, Andy Muller-Maguhn and Jeremie Zimmermann (OR Books). That the Guardian, a principal gatekeeper of liberal debate in Britain, should describe their published conversation as “dystopian musings” is unsurprising. Understanding what they have to say is to abandon the vicarious as journalism and embrace the real thing.

“The internet was supposed to be a civilian space,” Assange writes. “[It] is our space, because we all use it to communicate with each other and with members of our family … Ten years ago [mass interception] was seen to be a fantasy, something only paranoid people believed in” but now the internet is becoming “a militarized zone.”  When everyone can be intercepteden masse, spying on individuals is redundant. Stasi, the East German secret police, “penetrated” 10 per cent of East Germany society.

Today, the cost of intercepting and storing all telephone calls in Germany in a year is less than eight million euros. More than 175 companies now sell the surveillance of whole countries. A whistleblower at the giant US telecommunications company AT&T has disclosed that the National Security Agency (NSA) allegedly took every phone call, every internet connection. The NSA intercepts 1.6 bn. personal communications every day.
To the “national security state”, of which the US is the pioneer and model, “perpetual war” is a given; and the public are the enemy -- not terrorists. Google, Facebook and Twitter are all based in the US.

In December 2010, Twitter was ordered by the Justice Department to surrender its clients’ personal information relevant to the Obama administration’s pursuit of WikiLeaks, no matter where in the world people lived. Obama has pursued twice as many whistleblowers as all US presidents combined. This is why Assange and Bradley Manning are targets – along with those rare journalists who do their job and publish in the public interest. Like Assange they, too, are liable to be prosecuted for espionage, regardless of what the US Constitution says. A whistleblower at the NSA, Bill Binney, describes this as “turnkey totalitarianism”.

The iniquity of Rupert Murdoch was not his “influence” over the Tweedledees and Tweedledums in Downing Street, nor the thuggery of his eavesdroppers, but the augmented barbarism of his media empire in promoting the killing, suffering and dispossession of countless men, women and children inBritain’s illegal wars.
Murdoch has plenty of respectable accomplices. The liberal Observer was as rabid a devotee of the Iraq invasion.

When Tony Blair gave evidence to the Leveson inquiry, bleating about the media’s harassment of his wife, he was interrupted by a filmmaker, David Lawley-Wakelin, who described him as a war criminal. At that, Lord Leveson leapt to his feet and ordered the truth-teller thrown out and apologised to the war criminal. Such an exquisite display of irony is contemptuous of all of us.

www.johnpilger.com
Posted by Unknown at 12:52 AM