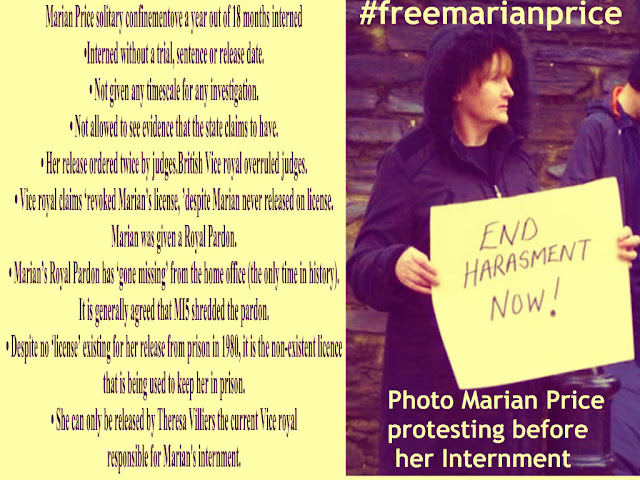 
To examine and discuss the justice issues surrounding the imprisonment of Irish prisoners Gerry McGeough, Marian Price and Martin Corey

Gerry McGeough (53) who was born near Dungannon Co. Tyrone is an honours graduate of Trinity College Dublin. He is a prominent Irish republican who was a Volunteer in the Provisional Irish Republican Army (IRA). He was the narrator for BBC documentary-maker Peter Taylor's TV series PROVOS screened in the 1990s. After his graduation from TCD in 2001 he returned to Co. Tyrone with his wife. They have four children. McGeough stood as an Independent Republican in the Northern Ireland Assembly elections in 2007. On 8 March 2007 McGeough was arrested by the Police Service of Northern Ireland (PSNI) as he was leaving the election count centre in Omagh. The arrest was in connection with an incident during The Troubles, the shooting in 1981 of a postman who was also a part-time member of the Ulster Defence Regiment (UDR). The postman who was delivering mail near Aughnacloy when he was shot, was armed and wearing a bullet-proof vest at the time and managed to return fire shooting McGeough. Both men were severely wounded. In 2007, 26 years after the incident, McGeough and another Volunteer were charged with attempted murder, conspiracy to murder, and possession of firearms with intent to endanger life and IRA membership. On 4 April 2007 both men were remanded in custody to appear at Dungannon Magistrates' Court. McGeough was granted bail on 29 March. In the run-up to the trial in 2010 McGeough had a heart attack and a second one during the trial. He now has six stents in his heart. In February 2011 McGeough was found guilty of the charges against him and sentenced to 20 years imprisonment. His accomplice was acquitted of all charges. Under the Good Friday Agreement McGeough should serve no more than two years in jail. McGeough is in HMP Maghaberry. In November 2011 he had a further heart attack in prison and had to be rushed to hospital where he had a further stent inserted. McGeough has been visited by a stream of VIPs, including the Primate of all Ireland Cardinal Brady and former Irish cabinet minister, Eamon O Cuiv, who has been campaigning for his release. In April 2012, McGeough's case was the subject of an off-the-record briefing at the US State Department conducted by Hillary Clinton's Director of Policy, Jake Sullivan. McGeough has no access in Maghaberry to a Cardiac Rehabilitation Programme (CRP) which is available to all NHS cardiac patients and is crucial for all cardiac patients. His grave heart condition is of great concern to his wife and children aged 11 and under. ----------------------------------------------------------------------------------------------------------------
Marian McGlinchey/Price (58) As one of the so-called "Price sisters" Marian Price was jailed for her part in the IRA London bombing campaign of 1973 and released on licence in 1980 after being granted a Royal Pardon. On 15 May 2011 she was charged with encouraging support for an illegal organisation. This related to her involvement in a statement given at an Easter Rising rally in Derry in 2011. On the same day the Secretary of State for Northern Ireland Owen Paterson revoked her release from prison. Marian was told the record of her Royal Pardon had 'gone missing' or had 'been shredded'. Paterson said the decision was made because the threat posed by Price had "significantly increased". On 26 October 2012 Marian was charged with addressing a meeting in support of a proscribed organisation in Derry in 2011. Marian Price has been very ill for months. She was moved to the hospital wing of Hydebank prison in February of 2012 where her condition rapidly deteriorated. The charges against Marian Price and three Derry men were dismissed by Derry Magistrate’s Court in May 2012 but Price was retained behind prison bars. In June 2012 she was moved from Hydebank Prison to a Belfast hospital. In September 2012 Price's solicitor said after examinations by UN, prison and defence doctors their consensus was she was too ill to stand trial. A letter published on 29 June 2012 and signed by 22 TDs, Irish Senators, American community leaders and a host of leading religious figures states:

Marian Price is the victim of psychological torture and internment without trial, and as a result of this her mental health and physical health has deteriorated rapidly. Given the concerns about her very poor health, we are calling for her immediate release based on humanitarian grounds.