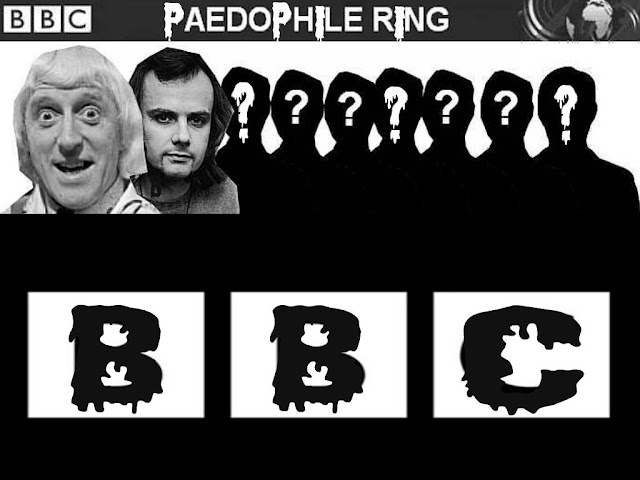 Child abuse and paedophilia was absolutely rife in the BBC and Britain with most commoners having no idea of the scale of what we are looking at here. Equally shocking are the ‘people’ exposed as ‘ring-leaders’ often high profile celebrities, Lords, Ladies and many well known public figures.With recent Jimmy Savile ‘revelations’ the BBC is facing a multi-billion pound legal bill, with the hundreds of women involved in the scandal now becoming thousands, with  huge compensation claims. These claims will devastate the BBC, not just financially and legally but its future reputation, while exposing the BBC’s secret, dark past.


The story is not Savile, its the story of how the BBC was able to help a BBC paedo ring to get away with abusing  and supplying thousands of children for many, many years to British High Society.When the BBC in October 2012 said it found no evidence of its management ignoring allegations against Savile, they lied. They are LIARS ! This is the shameful disgrace of the BBC, caught red handed, in a tsunami of filth.The BBC has covered up not just the sick behaviour of Jimmy Savile but many others, operating in a BBC paedo ring, with many High Society, celebrity names and figures of influence, intimately involved in child rape. This scandal will rock not just the BBC but also many British institutions involved in monstrous and shockingly huge cover up on an unprecedented scale.


The information that will become public over the coming months will shatter not just the BBC, but all of Britain from top to bottom, as Lords, Ladies, entertainers, public figures, former Prime Ministers, politicians are all exposed, for the rotten child raping criminal paedophiles they are. This is one of the sickest, most grotesque scandals of all time in Britain, orchestrated by so called respectable toffs of the British establishment. We are being fed a lot of disinformation and lies to distract us, with regard to the huge extent of this scandal. We have to face the harsh truth of what has been happening in Britain and Paedophilia must be removed from all levels of society. Jimmy Savile was at the heart of a BBC Paedophile ring that procured children for well-known figures in the British Establishment, including former British Prime Ministers, including paedophile and murderer Edward Heath.


The perverted life of Jimmy Savile was exposed as a Paedophile and necrophiliac by researchers, as far back as the 1990s, but, people just ridiculed it, with the the police, media, politicians and the BBC all covering it up. David Icke was right and exposed the monsterous crimes but most of those who listened, laughed at him and condemned him for what he exposed. Because BBC told them what to believe with programmes like Hearts and Minds and the BBC wanted people to believe these claims as laughable but now they’re undeniable. The Jimmy Savile Panorama documentary revealed, the BBC suspected Savile of sexual rape 40 years ago. With a lawyer accusing the BBC of hiding and protecting a paedophile ring for decades and no time statute of limitation for criminal prosecution in Britain, there may be hundreds of very worried BBC staff right now.


The first question is why didn't the press do something to expose this monster years ago; after all his offences go back 50 years and many knew about them? The sad fact is that in Britain the rich and powerful get away with almost anything, including pedophilia, and the UK press have long been cowed into submission. Britain's largest press baron, Rupert Murdoch, confirmed this recently when he tweeted "Needed to demonstrate no such thing as free press in UK".
Besides Britain's libel laws are so draconian that they seriously impact freedom of speech and of the press in favour of establishment elites. It wasn't until Savile died that they were able to pluck up the courage to start printing the long known truth.
There now seems to be witch hunts for scapegoats as power elites try to divert attention from themselves. Firstly it was about Savile: removing his tombstone, cancelling his honors, etc. When that wasn't enough to satisfy the public ire, the attempts to find scapegoats turned to the media's failure to report the story, or the police's failure to investigate.
But increasingly it seems that Savile was a protected man. One senses that the real question should be the role of the Intelligence/Security services [MI5 / MI6 in UK] and establishment elites in the cover-up.
Sir Jimmy Savile's extraordinary relationships went indeed into the highest levels of the UK Power Elite. Some of these close relationships have already been described in this article, but there is far more to them than that. Savile was for years a regular guest of Margaret Thatcher at her official country house when she was Prime Minister.
Savile was close to Royalty, as well, and a frequent visitor to Buckingham Palace, Kensington Palace and Highgrove (Prince Charles' estate). Indeed Prince Charles had visited Savile at Savile's retreat in Glencoe, Scotland.
The Daily Mail reported in 2011 that Savile had "been used as an intermediary in an attempt to resolve the differences" between Charles and Diana. Indeed the late Princess Diana described Savile as a "sort of mentor to Charles".
Posted by Unknown at 12:56 AM